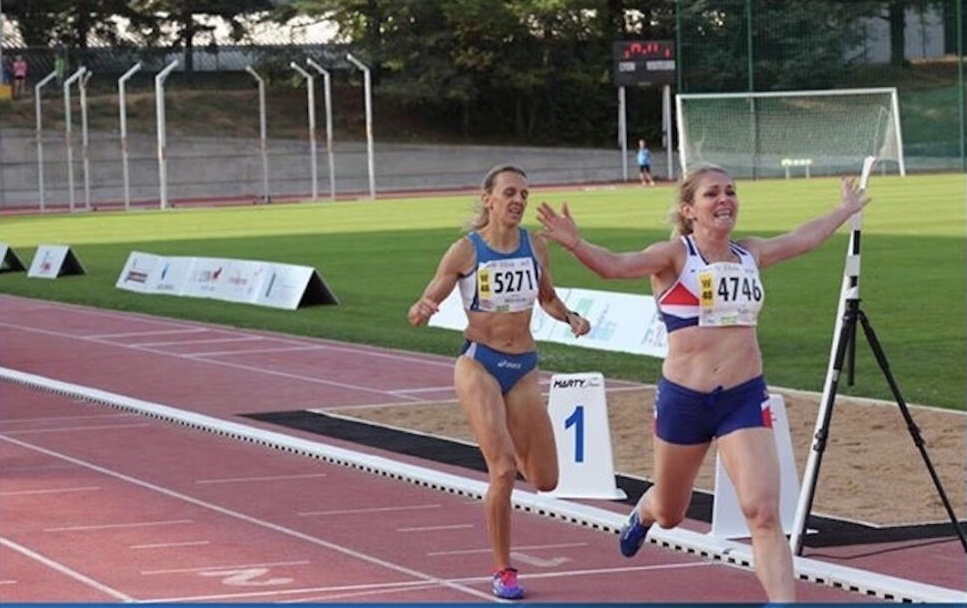 Back in September last year, we featured the illustrious career of multi-world masters champion Louise Rudd in Rudd-ered for Success (September 10th). In a celebratory piece which took her 2015 W800m Gold in Lyon as its centrepiece, we explored how she had adjusted the volume, frequency and her training in order to account for a progression in her biological, training and competition ages.

Even with the most enlightened of approaches, sometimes things go wrong and its fair to say Louise has had a tough time of late. This being said her struggles with injury in recent months can be used to develop understanding among the collective running fraternity.

In this piece we focus on two physiological problems which in Louise’s case may have been interrelated. In definitional terms (1) Proximal hamstring tendinopathy or PHT tends to be more popularly referred to as ‘high hamstring’ tendinopathy.

According to Zissen et al. 2010, tendon degeneration, partial tearing and peritendinous inflammatory reactions may all be associated with the condition as what is contextualised as ‘insertional tendinopathy’ (Cook and Purdam, 2009). (2) A meniscal tear represents an injury to a part of the knee, namely the meniscus. Two crescent-shaped pads of thick, rubbery shock-absorbing cartilage in the knee joint represent the menisci, their being located between the femur and tibia.

The owner of 6 global masters gold medals remembers that, “It was a cold Saturday morning and I had decided to do a Park Run back in November 2018. I had run some of my biggest mileage in a number of weeks and to be honest I felt pretty good. I have always been the type or runner that would do a session/race in shorts whatever the weather as it is a mindset thing and makes me feel race ready.

I did note however that particular day it was really cold but it was too late to change by the time I’d made my way to the start. Within the first mile, I felt something ‘go’ at the top of my hamstring but I limped on and finished.

My initial thoughts were that it was something to do with my back as in 2015 I stepped out for a run and had a dead leg which after an MRI scan it transpired that I had a bulging disc pressing on a nerve. I had managed this with starting yoga and physio and it felt that it was under control”.

The five time European champion continues that, “I went to see my physio as soon as I could and we both agreed that it was likely a high (also known as proximal) hamstring tendinopathy. It is commonly seen in distance runners, sprinters and hurdlers in athletics. What I felt was a deep, localised pain in the area of the ischial tuberosity (your sit bone).

For me, I just wanted to hold the area to support it. It didn’t actually stop me running, it just felt very uncomfortable and I particularly found that trying to do anything fast was out of the question. What did not help was the fact that I’m a rep for a pharmaceutical company so driving while being sat for large parts of the day was agony and there was no respite”.

The owner of two British records explains that, “Speaking as an athlete, the key to tendinopathy management is loading. It should be progressive loading whilst monitoring pain. Exercises such as isometric leg curls, isometric long leg bridging with two legs progressing to one leg, bridge holds were what I undertook.

I took professional advice to understand that the key to proximal hamstring tendinopathy rehabilitation is to 1) restore hamstring strength and 2) restore hamstring muscle bulk & capacity in a functional range of movement. In addition, Heavy Slow Resistance (HSR) training is advocated including eccentric and concentric elements.

I am aware enough to know that all rehabilitation should progress and I moved onto Nordic hamstring curls with the aim being to continue with functional training in greater hip flexion. I embarked upon progression to hip thrusts, forward step ups, walking lunges, deadlifts and Romanian deadlifts.”

With candour the Stockport Harrier acknowledges that, “With the benefit of hindsight, my path towards rehabilitation was somewhat stalled by me not resting as I had a World Indoors Masters Championships in Poland in March 2019 that I desperately wanted to attend.

I should not have gone as training for the months after the November incident had been intermittent. I then ran a 5K race on the roads in April and couldn’t walk a step at the end so at that point I knew it needed further investigation”.

In explaining the process of the MRI scan, she explains that “The results showed a partial tear in the hamstring and the health of my back had also declined so i had two procedures:- an epidural into the lower back (caudal epidural) and a Platelet Rich Plasma (PRP) injection into the site of the hamstring tear.

Although PRP has been around since 2009 it is still considered experimental and evidence is inconclusive. Basically they take your own blood, centrifuge it so that it separates and then they inject you with your own plasma to try and instigate repair as platelets release growth factors and proteins”.

Pushing through the pain

The 46 years old recalls that, “I started the winter season in 2019 and trained a lot on grass for the xc season. My hamstring was uncomfortable but not unbearable. I had noticed that the inner side of my right knee (same leg as the hamstring issue) had begun to hurt a little, but i just strapped it up and ran on. I actually had some good results and managed a 10K PB at Telford in the December having turned 45 in the November”.

With obvious frustration she articulates that, “After a small break I commenced indoor training for what we thought would be the European Masters Indoors Champs in Portugal but as i tried to put any speedwork in the hamstring was complaining as was the knee.

As we all know in March 2020 the UK went into lockdown so I decided to ease back on my running. Rather annoyingly I managed to sprain my ankle just walking (also on my right leg) and we drove to France for a vacation. I did alot of walking and some cycling but by the end of the holiday the pain in my knee had literally brought me to a halt. It was incredibly painful”.

The Northern Masters athlete continues that, “I decided to have another MRI scan which showed a torn meniscus in the knee but also that the hamstring tendon had now become partially detached from the ischial tuberosity. The only option I had was surgery and I operated on by a specialist in September 2020.

Hamstring tendon surgery is still reasonably unusual and the surgeon concluded that it was highly likely that the meniscus had torn due to hamstring detachment forcing a change in biomechanics.

He was also rather surprised how I had managed to keep running on it for such a long time! He performed both operations at the same time as we felt that rehab from one then another wasn’t the best”.

Ever the optimist, Louise’s mood visibly lifts when a return to running is mentioned. She enthuses that, “The initial aim of physio was to build up strength again in the hamstring muscle whilst not putting too much pressure on the tendon as the last thing you want is for that to become detached again!

It was 12 weeks from the operation to commencing some light running a few times a week. We tested the strength in the hamstring before I was allowed to run to ensure it was similar to the other leg. Rehab so far has gone well and have been back running a little for the last six weeks”.

One should always seek medical advice where injury is concerned but as athlete and coach, Louise and I can leave you with the following questions for self-reflection which lean towards prevention rather than prescription…..

1. When I suddenly increase the volume, frequency or intensity of my training, am I aware that I am more at risk of injury?
2. How is the work I do on foundational and fundamental development assisting me to stand the best chance of remaining injury free?
3. What I can do to change my wider lifestyle demands which will help me stay injury free e.g. driving less or investing in a sit-stand desk to help posture?
4. Why is it important I seek medical diagnosis at the earliest opportunity when experiencing pain?
5. What can I do to ensure that I desist from exacerbating an injury by being unwittingly sucked into pressure to continue to train and compete?
6. When I return to the sport how am I managing my training overload so as to avoid the risk of re-aggravating the problem?

Matt Long is both Midland Mens Road Running Team Manager and Midland Masters Mens Team Manager and can be contacted for views on this piece through mattlongcoach@gmail.com. You can keep up with Louise’s rehabilitation and comeback @lulurudd on twitter or @louisenrudd on Instagram