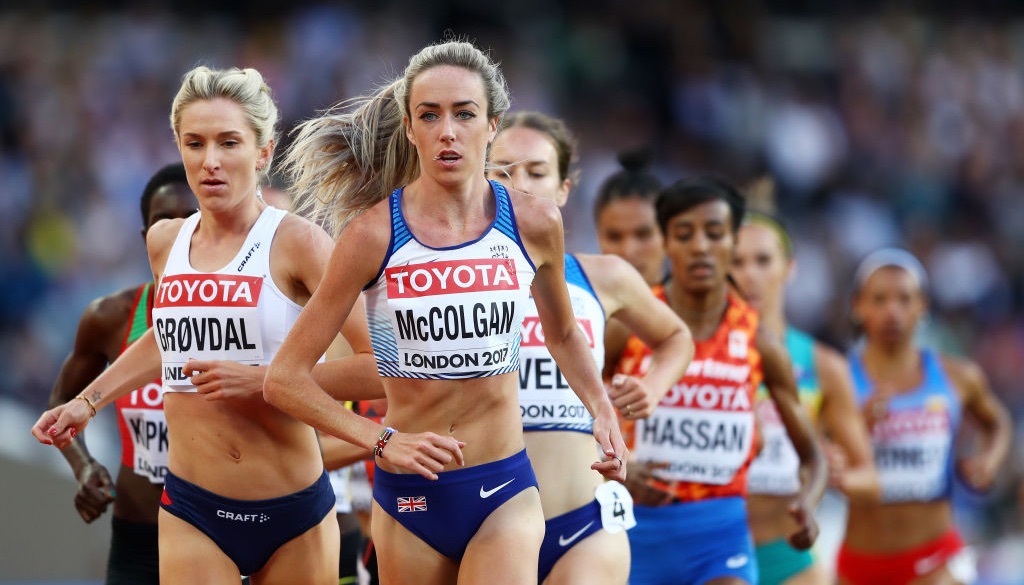 Laura Muir, who finished fourth in the 1,500m on Monday, finished seventh in heat one in 14:59.34, advancing to the final as a fastest loser.

GB’s Eilish McColgan put in a commanding display clocking 15:00.38 to finish fourth, a new personal best for the 26-year-old, and just 82 hundredths of a second off her mother Liz McColgan’s personal best.

Afterwards McColgan said: “I’m so shocked at that time. It was so slow at the start.”

“We’re not allowed to see the previous race, so we were jumping over trying to see the times and any time the door opened for people to go to the toilet we were trying to see what was happening.

“We knew it was quick because we could hear the Tannoy, so fastest-loser spots were crazy. After the first couple of laps I thought, ‘We’re in trouble here – we need to be top five’.”

After a building up a massive lead early in heat two USA’s Molly Huddle struggled and was over taken by six of the field, finishing seventh, and fortunately qualified as a fastest loser.

Fellow GB athletes Shelayna Oskan-Clarke and Adelle Tracey also qualified for the semi-finals, Oskan-Clarke with a time of 2:01.30 and Tracey with 2:00.28 in their respective heats.

In the men’s 1500m heats, Britain’s Chris O’Hare made it safely into the semi-finals clocking 3:42.53 to finish third in heat two.

Team-mate Jake Wightman also advanced into the semi-finals, finishing fourth in heat three with a time of 3:38.19, with Australia’s Luke Mathews looking strong as took the win.

USA’s Olympic champion Matt Centrowitz failed to qualify for the semi-finals, struggling as he finished 14th in 3:48.34.