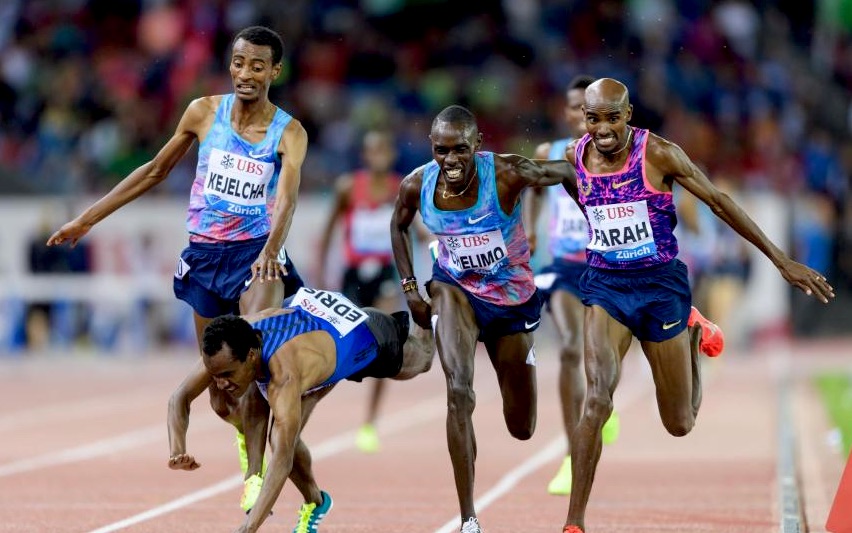 Mo Farah won the 5,000m final at the Diamond League in Zurich, ending to his illustrious track career with a thrilling win.

In his final track race before turning his attention to road racing, the four-time Olympic Champion had the final say over rival Muktar Edris.

Ethiopian Edris clinched the 5000m gold at the Wolrd Championships to deny Farah a fourth consecutive world gold medal over the distance.

In the Letzigrund Stadium, the race set off at a fast pace, with Farah sitting patiently in the middle of the field as they came through 2000m in 5:13. With no one willing to take the race, the pace dropped with five laps remaining, setting up a fast finish for Farah.

With two laps to go 34-year-old Farah was right on the shoulder of leader Mohammad Ahmed and as the bell sounded for the final lap of Farah’s illustrious track career, the world 10,000m champion was out in front, but closely tracked by Ethiopia’s Yomif Kejelcha.

Coming into the final 100m, victory was in sight for Farah but his rivals were right on his heels.

As the pack sprinted for the finish, Edris flung himself at the line, with Paul Chelimo attempting to squeeze through a gap that wasn’t there, but the victory belonged to the ten-time global gold medallist, winning his final track race by four hundredths of a second, in 13:06.05.

It was the fitting end to Farah’s track career, thoroughly deserving to walk off the track for a final time with a trophy in hand.

“I wanted to win, and it is amazing that I have won, but it was hard work. I will miss the track, the people, my fans.

“I have enjoyed running in stadiums for a lot of years, but now, first of all, I will enjoy being with my family,” said Farah.

Ameican Chelimo was originally second but subsequently disqualified for causing an obstruction, moving Edris up to second with 13:06.09, and Kejelcha third in 13:06.18.

Ruth Jebet of Bahrain was less than three seconds off her own world record in the 3,000m steeplechase final.

The 20-year-old raced clear of the field from the start, and apart Beatrice Chepkoech tailing for most of the race, a challenger was nowhere to be seen.

The Olympic champion clinched the win in an amazing 8:55.29, more than four seconds ahead of Kenya’s Chepkoech for a new world leading time, meeting record and the second fastest time ever. American world champion Emma Coburn finished in fourth.

CJ Ujah won the first Diamond League trophy of his career with a season’s best performance in the men’s 100m. The British sprinter, who won last week in Birmingham, just pipped Ivorian Ben Youssef Meite to the win, with both athletes clocking 9.97.

It was Ujah’s fourth Diamond League 100m win of the year, adding to Rome, Rabat, the Anniversary Games in London and Birmingham.

Shaunae Miller-Uibo stole the show in the 200m final, sprinting down the home straight to take the win from Elaine Thompson and Marie-Josée Ta Lou.

200m world champion Dafne Schippers had to settle for fourth place, crossing the line in 22.36.

Britain’s Jake Wightman ran a strong race to finish seventh in 3:35.25, rounding off an impressive year for the young middle-distance runner.

Wightman made a name for himself at the Diamond League earlier this year with an impressive win at the Bislett Games in Oslo, and after a disappointing World Championships got back to winning ways in Birmingham last week winning the Emsley Carr mile, to become the first British athlete to win the prize since 2005.

With two-time world champion Wayde van Niekerk out injured, Botswana’s Isaac Makwala, who made headlines at the World Championships in London, eased to the 400m win in 43.72, finishing ahead of American duo Gil Roberts and Vernon Norwood.