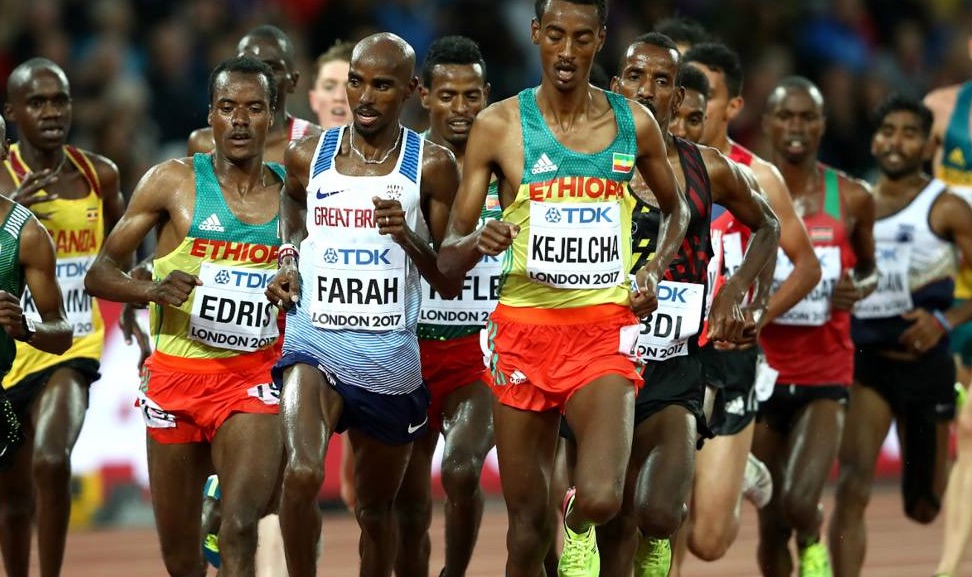 Mo Farah eased into the 5,000m final, setting up the perfect farewell to the track as he goes for a fifth consecutive global double.

Returning to the track five days after defending his 10,000m world title, Farah aimed to go one step closer to another 5,000m and 10,000m double by safely making his way into Saturday’s final.

With the rain pouring down inside the London Stadium, the race began slowly, with the 10-time world gold medalist starting in familiar fashion sitting back and observing the rest of the field.

But after the first 1000m the pace kicked on, prompting Farah to take notice and move up the field of 21 top athletes, with Tanzania’s Giniki Gisamoda and Ethiopian pair Yomif Kechejcha and Muktar Edris sitting at the front.

As the pace slowed again, the double Olympic champion was content floating between fourth and seventh place.

Coming into final two laps, and with only the top five making it through to the final, Farah moved himself up to the front of a tightly packed field.

Speaking afterwards Farah said: “I am a bit tired – that was a tough run after the 10k final but I can just go back and rest and see what I can do.

“It’s difficult to motivate yourself after a win like that (10,000m) but you aren’t going to win unless you recover, get rest, turn the lights off and prepare all you can.”

17-year-old Selemon Barega won the second heat of the night, crossing the line in 13:21.50. Finishing second was Birhanu Balew of Bahrain, with Kenya’s Cyrus Rutto third.

2015 world champion Hyvin Kiyeng Jepkemoi also made it through to the next round, alongside Olympic champion Ruth Jebet of Bahrain and USA’s Emma Coburn.

After a strong start in heat three, GB’s Rosie Clarke was unfortunate to fall when negotiating a water jump. The 2016 British champion recovered well and after getting back into contention, Clarke suffered another misfortune, this time, jumping a hurdle.

Clarke, who was making her first appearance at a major championships, got back up and battled on bravely for a 9th place finish in 9:49.36.

Colleen Quigley of the USA, finished third in the opening heat but was later disqualified.

In the hammer defending champion Pawel Fajdek of Poland and compatriot Wojciech Nowicki made it through to the final, along with GB’s Nick Miller with an excellent first throw of 75.52m.

In the women’s long jump, Olympic champion Tianna Bartoletta made it through to the final with 6.64m, as did Russia’s Darya Klishina, who is competing as a neutral athlete, and Britain’s Lorraine Ugen.

Jazmin Sawyers missed out on the next round, finishing 18th with a best jump of 6.34m, while fellow British athlete Shara Proctor’s also missed out.