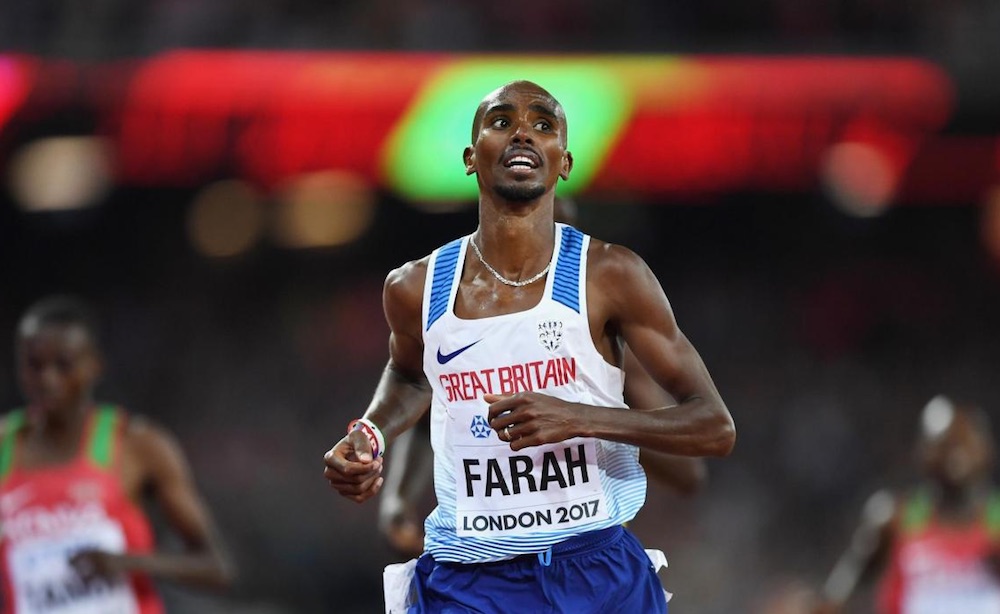 In his final championship track race, Mo Farah was denied a fourth consecutive 5,000m title, as Ethiopia’s Muktar Edris stormed to the gold medal, with Farah having to settle for a hard fought silver.

Farah, the recently crowned 2017 world 10,000m champion returned to the track three days after safely negotiating his way to the 5,000m final, and managed once again to elicit roars from the adoring crowd inside the London Stadium.

USA’s Paul Chelimo took the field out hard from the word go, with Farah lining up behind him in second place. With no one else willing to take on the race with Chelimo the pace slowed leaving Farah and team-mate Andrew Butchart taking it on.

Possibly inspired by Sally Pearson’s gold medal win moments before, Australian Patrick Tieran took charge of the race with 2000m to go, managing to build up a 15m lead.

The lead was quickly eaten up by the lead pack that included Farah, GB team-mate Andrew Butchart and a trio of Ethiopian athletes.

Coming into the final 300m the Ethiopian trio of Barega, Kejelcha and Edris kicked on, with a fatigued Farah hanging on.

As they came around the final bend, Farah was in fourth and boxed in by Chelimo and Ethiopian duo Edris and Kejelcha, but the double Olympic champion was still fighting bravely to seal the magical gold ending to his track career. But the gap was just too much with Farah crossing the line in second place, behind the jubilant Edris.

Going into the 5,000m final Farah had beaten Edris four out of four times, but it was the 23-year-old who had the final say in Farah’s last major championships track race. The young Ethiopian won gold clocking 13:32.79, his first major championships medal. Farah bagging silver in 13:33.22, with USA’s Chelimo taking bronze in 13:33.30.

Speaking to reporter’s afterwards, Farah said:  “It’s been a long journey but it’s been incredible, It didn’t quite hit home until after I crossed the line and had a couple of moments to myself when I realised – this is it.

Fellow Briton Andrew Butchart, who was sixth at the Rio Olympic last summer, finished 8th in 13:38.73

Farah will turn his attention to marathons and road racing after his final track race at the Diamond League final in Zurich at the end of this month.

Australia’s Sally Pearson took victory in the 100m hurdles final, crossing the line in 12.59, finishing ahead of USA’s Dawn Harper-Nelson. After missing last year’s Olympics due to a serious injury Pearson has battled back to form at the right time to win a second gold in front of a London crowd following her 2012 Olympic gold.

Harper-Nelson, the 2008 Olympic champion clocked 12.63 for silver, with Germany’s Pamela Dutkiewicz taking bronze in 12.72 for her first global championships medal.