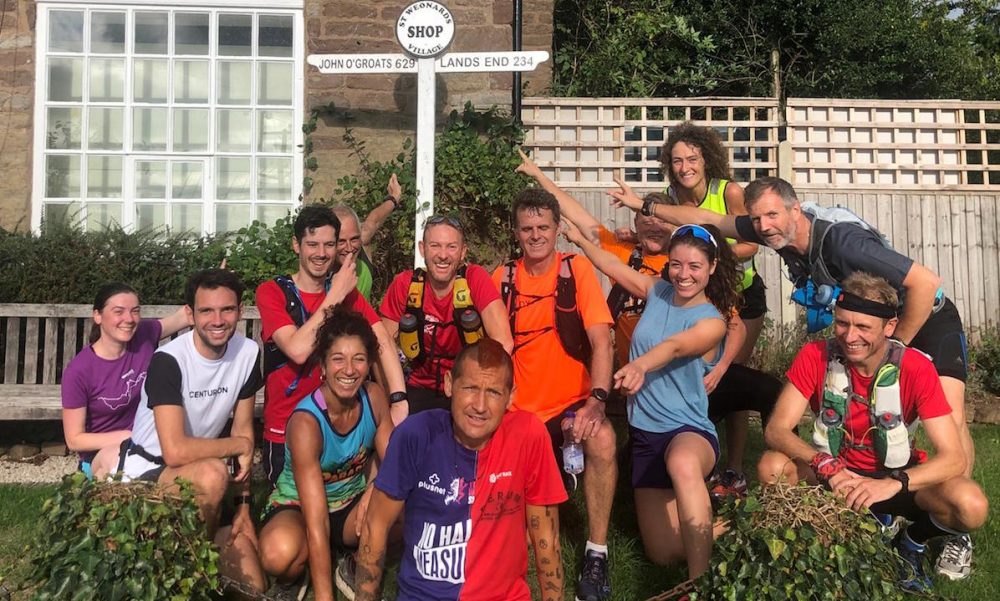 UPDATE: Dan Lawson stopped on the eighth morning of his JOGLE record attempt. The athlete as already joked  “Anyone fancy LEJOG 2019?”

Dan Lawson has called day seven to an early close when it became clear that the nine days and two hour was not going to be achievable. The 24hr runner had been on schedule at the end of day six but the morning’s running was not good.

With several problems causing the inspirational runner to move slower and slower, the decision was made to introduce more sleep during the day to help keep progress moving forward.

Crew member Mick Seymour felt that “Dan was still eating and drinking really well, but the lack of sleep over the past week was catching up”. The experienced British 24hr crew member has seen Lawson in tough times in the past, but this was a new level.

With experienced JOGLE former record holder Richard Brown now joining the support staff the plan was changed. Now it was four to six hours of running, followed by a 45-minute nap.

The aim of a 45 min sleep is to avoid getting into deeper R.E.M. sleep patterns, but optimise rest. Past 45 minutes it takes 90 minutes to go through a full cycle and waking the athlete up during this can have a detrimental effect.

The route was changed to find flatter running and easier support positions for the crew but the pace kept slowing.

The extra sleeping stops were not keeping the record attempt on course and very quickly the nine day, two hour finish could be seen slipping away.

After several discussions within the team and supporters elsewhere it was decided that the record wasn’t achievable. Lawson’s health was also a concern, as well as simply his enjoyment of running. For someone who loves their sport so much, pushing too hard can risk that love.

Despite the monumental efforts of wife Charlotte Jalley and crew members Mick Seymour and Richard Brown, the run was stopped for the day on the A38 before Axbridge.

The show must go on

The plan is now to have a full night’s sleep and aim to complete the run under ten days. This would still be the second fastest JOGLE of all time, with Richard Brown’s 10 day and two-hour record. Still a huge task, but an extra day might help Lawson achieve this goal.

A tired, but content Lawson today said “the people coming out to support have been wonderful. It’s been beautiful to see so many of the running community just come out and support me. I’m so thankful.

“Even now three guys are waiting in the car park in case I want to get going again. It means so much to me that people would take the time to come and help me on this adventure.”

In some way you could hear the relief in Lawson’s voice, the happy runner could run for fun again tomorrow. The growing pressure of the record was carried heavy on his shoulders.

“It’s been great to run with so many people. I think one day we had about 20-25 different people join us. In Scotland, children were staying up late just to hand me sweets as I ran past,” recalled the athlete. “If people want to come join me in the next couple of days I will be running to Land’s End.”

So whilst there is still time, take the chance to join Dan. You can still check on Open Tracking where the runner is, but let’s allow some space to get things moving on Tuesday morning first.

The plan may have changed but the people at www.sportsinjuryfix.com were still helping each day to find physios to help the JOGLE adventure. If you need to find a sports specialist in your local area then Dan can highly recommend them.

As a 24hr runner and friend of Dan. it has been a joy following his progress this week. His attempt on the record has been nothing short of extraordinary. Every effort has been given to see if this was possible.

I’m sure I’m not the only one who has been inspired by Dan’s running. As well as Dan, his crew of Charlotte and Mick have also been brilliant and I know they have worked their socks off to help make Dan’s dream a reality.

Fast Running will still follow Dan to the end of the road, but even after the adventure ends this time, it does not feel like the end of the journey.