Fast times in Brighton and competitive running across the UK 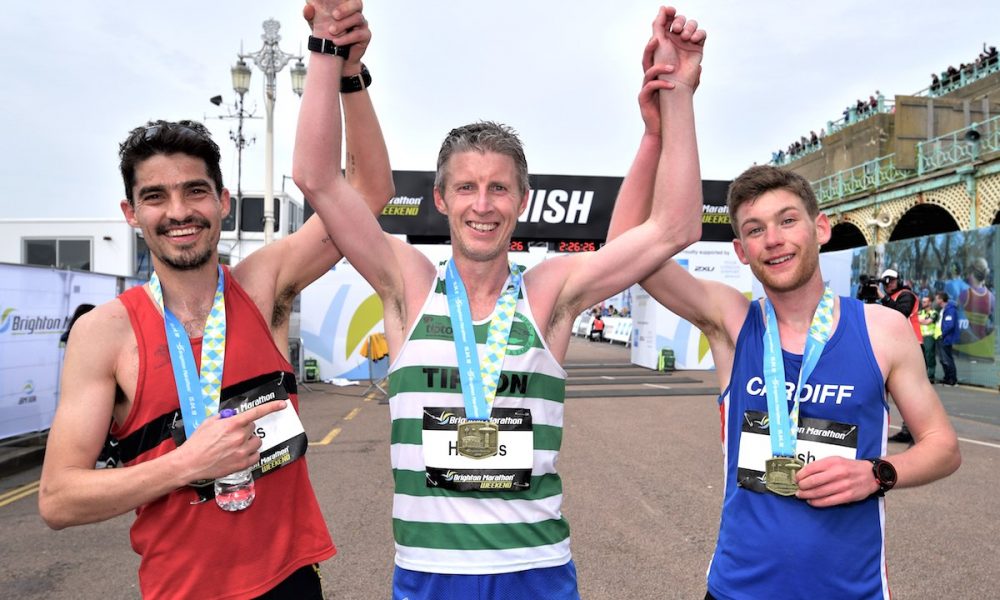 The return of the sunshine brought fast times to Brighton’s marathon and 10k, while the Derby 10k saw Kate Avery continue her return.

Half marathons and marathons in Norwich, Boston and Llanelli also produced competitive results, while on Saturday the Leeds City women’s team retained their 6-stage crown at the National Road Relays, with Tonbridge’s men winning a first ever 12-stage title. A full report can be found here.

Brighton, one of the UK’s newest but fastest growing marathons, played host to an exciting battle to the finish between Tipton’s veteran ace, Stuart Hawkes, a V40, and Cardiff’s Dan Nash.

Hawkes won the fight in 2:22:33, five minutes faster than his winning time from last year and a personal best of more than four minutes, but only caught the eventual runner-up Nash, in the last mile of the marathon, after Nash had led for almost the entire race.

Nash can take comfort in the fact his 2:22:55 represents a substantial five minute PB. Brighton and Hove’s Kevin Rojas completed the men’s podium in 2:23:54.

Ipswich Jaffa’s Helen Davies also defended her title in the women’s race, taking victory by more than 10 minutes in 2:38:41. The 2010 Commonwealth Games and European Championships GB marathon representative holds a PB of 2:34:11 from six years ago, but didn’t need to dig as deep to defeat the runner up, Northern’s Sarah Webster from the Isle of Man.

It was a similarly classy affair in the 10k, with Cardiff’s ever-improving Charlotte Arter recording an impressive 40 second PB of 32:20 to take the win from the most dominant athlete of this year’s domestic cross country season, Phoebe Law.

The Kingston & Poly athlete in second also ran her fastest ever time of 33:15. Havering’s World Half Marathon GB representative, Faye Fullerton, was only caught in the last quarter of a mile by Law, but still ran a competitive 33:23.

It was a welcome return to 10k road racing for Shildon and GB’s Kate Avery, who was running her first race over the distance in four years.

Heanor’s ever consistent V40, Lisa Palmer-Blount, was in superb form to take second in 35:27, just 7 seconds shy of her best from four years ago, while Alice Daniel’s 36:40 earned her the third lady’s prize.

Derby’s home talent, Richard Weir, who holds a 29:47 PB, won by 9 seconds in 31:06 from club mate Joseph Kilgour, while Hedley Hardcastle’s 31:27 ensured a Derby AC domination of the podium positions.

A huge thank you to everyone turned out today for the biggest race we’ve ever put on, and to those who made it possible!

It was a home win for City of Norwich’s Ash Harrell, who was an utterly dominant winner in 69:54, nearly four minutes ahead of Reepham Runners’ Dominic Black’s 73:50.

There was a similarly gaping gap to third-placed Jack Gillick of Wymondham AC, who posted a 77:14 result to make up the podium positions.

Norwich’s Mabel Beckett kept the women’s trophy in the host city’s hands when she fought off competition from two of the country’s top veterans, Colchester’s Sarah Stradling and Nene Valley Harriers’ Philippa Taylor.

The Great Welsh half and marathon

Swansea took top honours in the women’s race through Catherina Rennie’s 90:07, with the first and second club positions reversed as Llanelli’s Liz Robbins was second in 96:57. Llinos Jones made up the top three with a 99:01 result.

All runners are now making their way to the start-line as the race pen has now opened. Good luck to each and every runner! #RunCymru #WalesLovesRunning pic.twitter.com/pjgla6BTuc

Penarth & Dinas’s Catherine Barker won a relatively tight battle for the three top spots, taking victory in 3:33:30, just a minute clear of the runner up, OS Runner’s Karen Connell, who posted a time of 3:34:37, while she was only eight seconds ahead of third placed Christine Haigh.

Boston half and marathon

Retford AC’s Ben Harris fought off veteran competition from fellow V40 Rob Johnson of Aberystwyth AC when he won the marathon at Boston in 2:36:47 from Johnson’s 2:38:19.

Wellingborough’s Richard Loader was never far behind when he clocked 2:38:55 for third. Another top veteran, Fiona Davies of the ever-improving Rotherham Harriers, was the victor in the women’s race again, finishing 8th overall in 2:50:39 to retain her title.

V50 Julie Warner of Shelton Striders posted an impressive 2:56:49 for second, nearly 20 minutes clear of third-placed Paula Downing’s 3:15:02. Mablethorpe’s Downing is another V50 athlete, highlighting how healthy masters running is in the UK at the moment.

Northampton’s Hayley Munn proved she is back in form to take the women’s race in 78:59 and finish fourth overall, ahead of Higham Harriers’ Rachel Doherty’s 83:02. Lincoln Wellington’s Judith Broadbent’s 93:45 earned her the third lady’s prize.

Elsewhere, there was plenty of fast running again on Saturday at parkrun, and you can find the top 10 times here.