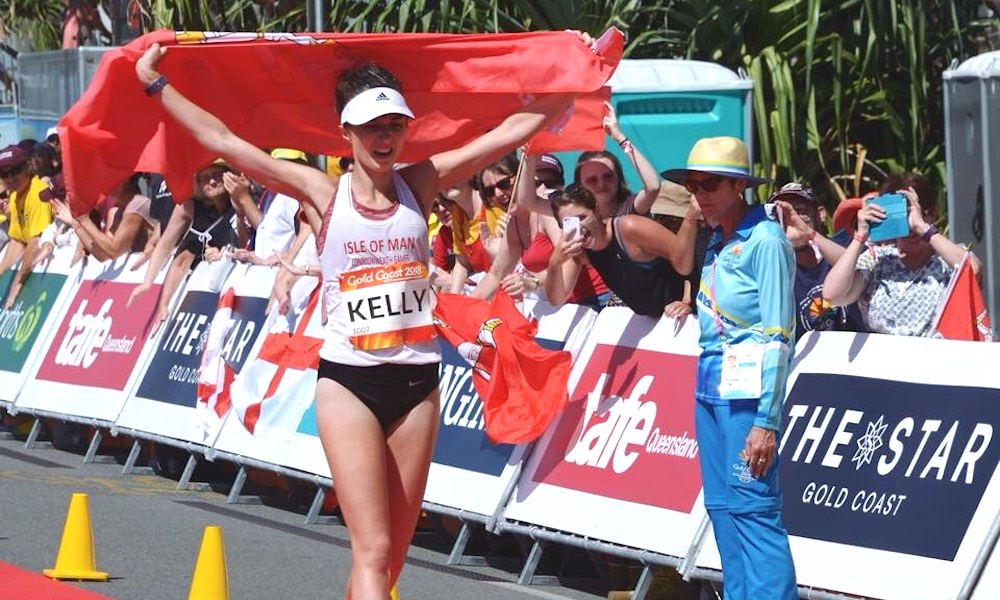 The Commonwealth Games athlete share her experiences to show the difference a corneal donation can make to others.

November is National Eye Donation Month in the US, a time to spread awareness of the gift of restored sight. Here in the UK there is also a shortage of donated corneas and so fewer people benefit from this life-changing treatment than there should be.

Erika Kelly hopes sharing her story will encourage more people to sign up as organ, eye, and tissue donors, so one day they could share the gift of life and restored sight.

I’m not entirely sure of the exact age at which I was affected by sight loss. I do however remember being in primary school, around the age of 9 years old and struggling more and more to read the whiteboard in class. I got my first pair of glasses around this time and I don’t think I thought any more about it.

As a kid growing up, I was regularly in and out of hospital experiencing corneal abrasions. My siblings were the same and my mum used to joke that we were born with season tickets to A&E. It was when I experienced erosion of the eye and subsequent ulceration around the age of 14, that I was referred to St Paul’s Eye Unit at the Royal Liverpool University Hospital and placed under the care of Mr Batterbury (St Paul’s Consultant Ophthalmologist & Corneal Specialist).

It was discovered that there was history of ‘Lattice Corneal Dystrophy’ within the family, and that soon became my diagnosis, helping to explain the recurrent abrasions, poor vision, photophobia and discomfort.

There was never a sudden loss in sight – it’s been quite a gradual decline. It became more significant whilst studying A-levels in Sixth Form, but I never particularly attended to it as a real issue. I’d pull on my glasses and get on with the work, thinking everything was normal.

I sat my exams, applied to university and didn’t stop to comprehend the impairment occurring before me. Unfortunately, my vision worsened, and discussions for further treatment took place.

In June 2011, I underwent corneal transplant surgery to the right eye and plans for University had to be placed on hold. In the meantime, whilst recovering, I applied to study some more A-levels specifically in Health and Social Care at University College, Isle of Man (UCM).

Months passed and it appeared that the transplant wasn’t having the desired effect. During my first year at UCM, I had to undergo refractive surgery with the aim of improving the visual outcome. With the addition of some new glasses and aids from Manx Blind Welfare/RNIB to assist with reading textbooks and whiteboards, I got through the two years, passing with high distinctions.

Having spent the last four years studying A-levels and feeling unsure of what path to take, I decided to take some more time out to gather work experience and earn. Following electrodiagnostic testing to rule out any issues in the signals between my brain and eyes, in August 2014, I had further refractive surgery. I then became the recipient of a second corneal transplant – this time to the left eye.

In terms of how sight loss has affected me… it has and it hasn’t.

I admittedly struggle on a daily basis, especially if I’m out and about in unfamiliar locations, forever bumping into things and mistaking a pile of leaves for a cat.

An example – I’m a competitive athlete and recently spent three months living and training at an endurance centre in Leeds. Within the first 10 days, I tripped and had to take a ride in an ambulance. I hadn’t seen some speed bumps and a slight dip in the road. In failing to use my hands to break my fall, I went flying down on to my forehead. The pool of blood on the floor spoke for itself. It wasn’t my finest moment, but thankfully nothing too serious! A good sense of humour prevails and I laugh it off, sometimes embarrassed but fully accepting of the situation. I also cannot for the life of me see well enough to notice and acknowledge people around me.

Close family and friends are aware of this, but others less familiar with my circumstances will probably think I’ve ignored them – I haven’t.

If someone waves, I’ll wave back. If someone says “Hi”, I’ll say it back. On 95% of occasions, I will have no idea of who I have just waved or spoken to, and seem to spend a lot of my time thinking I’ve seen “Barbara” or “Dave” and upon waving frantically at them, followed by getting closer, I realise the people in front of me are in fact complete strangers who are now staring at me, probably thinking I’m a complete weirdo.

With continually varying sight and symptoms that I can’t control for, I try to take each day as it comes. It’s only a barrier if others make it one. A visual impairment doesn’t define me, and it hasn’t slowed me down or stopped me pursuing anything.

I’m studying a BSc Psychology and Counselling degree, playing the harp professionally and competing internationally as an endurance athlete in the 20km race walk – having recently represented the Isle of Man in the Commonwealth Games on the Gold Coast, Australia!

It was an incredible experience, of which I will never forget and to finish in the top 10 was a complete bonus! I can’t wait for more experiences like that and will continue to strive to make the Great Britain team!

To end on a cliche statement (of which I firmly believe) – you can truly achieve anything you put your mind to, never give up.

I want people to know how great a difference they can make to two people’s lives if they tick the cornea box on the donor register – it is one of the most incredible acts anyone can do for another person.

You can learn more and become an organ donor here – and don’t forget to talk to your family and friends about your wishes.