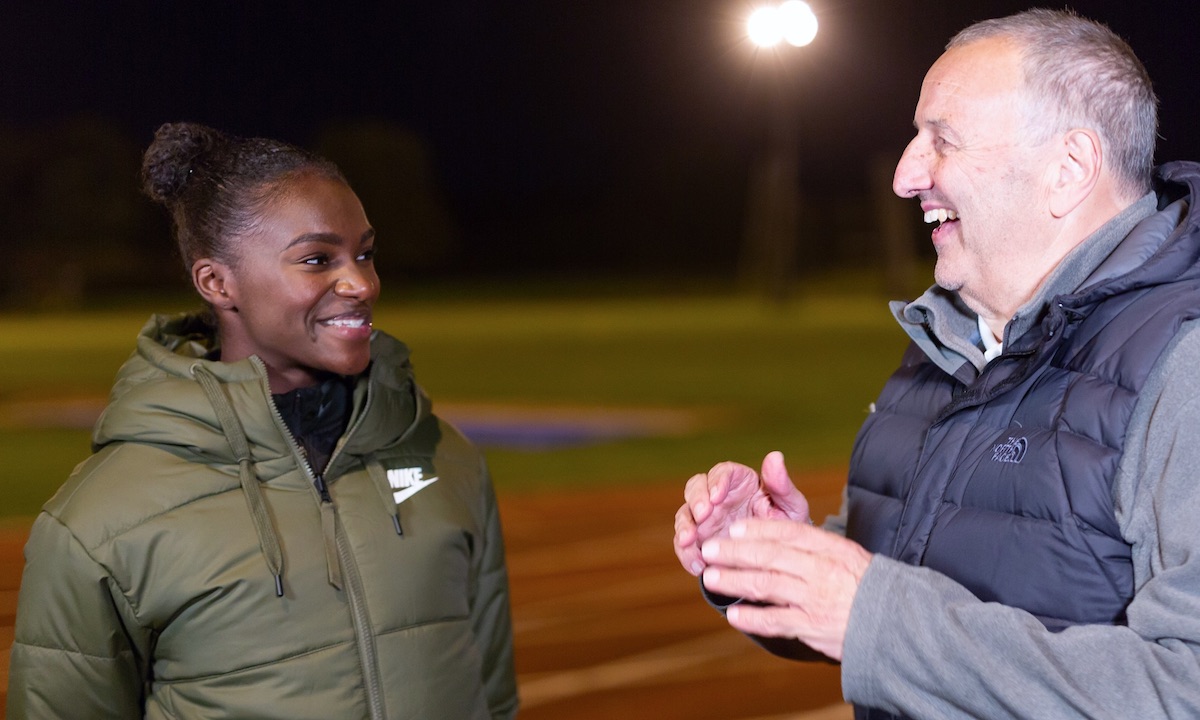 Alongside her coach John Blackie, Britain’s fastest woman helps launch the England Athletics campaign that aims to bring thousands into the world of coaching.

Dina Asher-Smith, the joint fastest woman in the world in 2018, has launched England Athletics’ #gocoach national campaign that aims to bring 10,000 new people into the world of athletics and running coaching by 2020.

Having trained with the same coach, John Blackie, since she was a nine-year-old at Blackheath & Bromley Harriers Athletics Club, Asher-Smith is someone who understands the importance of great coaches in the sport.

“The relationship between any coach and athlete, whether at elite or beginner level, is pivotal in enabling you to be the best version of yourself both on and off the track,” says the British sprint star. “The launch of #gocoach is a great reminder of all the hard work and support that coaches and run leaders provide – often voluntarily – to help others.

“I hope the campaign will inspire people of all ages and backgrounds to think about becoming a coach or run leader. Our fantastic sport wouldn’t survive without them.”

The launch of the #gocoach campaign will provide an opportunity for everyone to get involved. There can be a misconception that you must have a sporting background to become a coach, and while for many people it is a way of widening their enthusiasm for sport, people of all ages, backgrounds and aspirations can get involved in coaching.

Whatever their inspiration, it is a way of giving back to the local community by sharing their knowledge and their desire to see others enjoying an active involvement in athletics and running.

So, whether you are a university student, grandparent or simply someone with a little spare time, becoming a licensed volunteer coach or leader can be a life changing role.

Asher-Smith’s coach John Blackie adds: “Being a coach is incredibly rewarding. Not only are you able to share achievements, but you’re also there to support and motivate during any low moments.

“I’ve been lucky enough to work with Dina for 14 years now, and share her journey to being the fastest British woman in history. The joys of coaching don’t just apply to working with elite athletes though; being a volunteer coach or leader is an extremely worthwhile role. I would encourage everyone to get involved.”

Get Involved and help others

Being a coach or run leader is a great way to get involved in the sport, build new friendships and positively affect the lives of other people in your local community. Coaches have a tremendous impact on people’s experience of sport and physical activity, whether that’s helping them to achieve their full potential as a competitive athlete or encouraging them to become active and enjoy the many benefits of exercise.

For some, volunteer coaching is a great way to reduce social isolation, become an integral part of a new community and develop new skills. For others, coaching provides invaluable experiences and life skills which can be carried through into developing new career opportunities.

Ruth Worthington, a volunteer coach at Bury Athletics Club, says: “My daughter showed an interest in athletics when she was eight and I would take her to our local track and sit in the car reading a book whilst she trained.

“In the run up to the London Olympics, the club was becoming busier and the under-11 coach asked for some help from parents. I wasn’t sure what I could do but I stepped forward.

“It’s been really empowering as a woman to get involved in athletics and coaching. There’s loads of help and support out there to get you started and it really does make you feel good about yourself.”