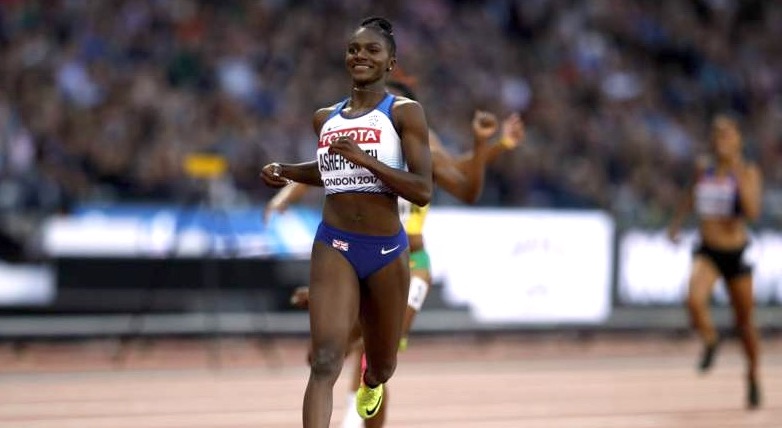 Dina Asher-Smith showed she’s getting back to her best, winning her 200m heat impressively in 22.73, at the World Championships in London.

Britain’s Asher-Smith who broke her foot at the beginning of the year, burst out of the blocks superbly to take a big lead, before easing off over the final 20m.

Even after easing off it was still a season’s best for Britain’s fastest woman.

The 21-year-old ran the fourth fastest time across all seven heats.

In heat one, Britain’s Bianca Williams finished fourth, crossing the line in 23.30 to qualify for the semi-finals as a fastest loser.

However, GB’s Shannon Hylton who was also fourth in her heat, missed out on qualification by one hundredth of second.

Dafne Schippers sailed through the first heat of the evening in 22.63. The Netherland’s star built up a big enough lead to practically jog the final 30m.

Bahamas’ Shaunae Miller-Uibo won heat four with ease. The 400m Olympic champion ran a steady first 100m before upping the pace impressively over the last 50m, crossing the line in 22.69.

While in heat six 100m silver medalist Marie-Josée Ta Lou also made it through with a win.

Tori Bowie, the recently crowned 100m champion, was due to compete in the heats, but withdrew unexpectedly.

In the second semi-final Olympic champion Dalilah Muhammad eased to the win ahead of Sage Watson of Canada.

GB team captain Eilidh Doyle finished third in 55.33 to qualify for the final as a fastest loser.

Britain’s Meghan Beesley doesn’t make it through, after finishing seventh in the first semi-final.