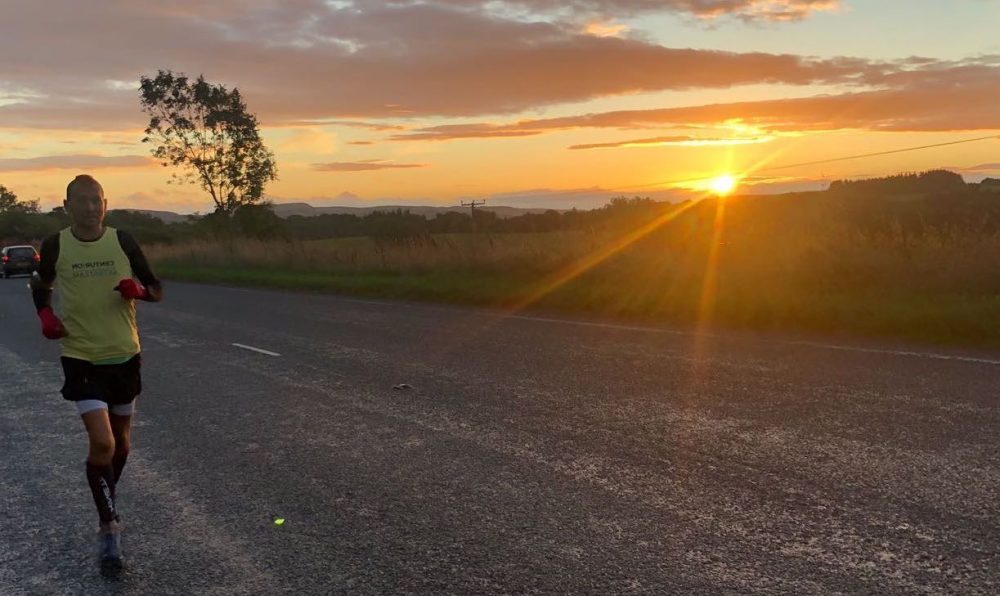 Ultra runner Dan Lawson has run 450 miles so far in his John o’Groats to Land’s End record attempt. The British International is over five days into his nine day challenge. He still needs your help.

After averaging 90 miles per day the runner is still going strong. But each evening it becomes a harder struggle to keep going late into the night to the day’s finish.

After calls for help on social media the running community is coming out to help Lawson. Anyone who can share even just a few miles of the record attempt is a huge help to the 24hr runner.

Physios to the rescue

After seeing the record attempt on Fast Running, Sports Injury Fix thought they could help with the record attempt and have been using their extensive network of local physiotherapists, sports masseuses and sports professionals to get someone to meet Dan at the end of each day.

Malcolm Sloan, the man behind the website, said that “what Dan is doing is simply awe inspiring. We wanted to help in anyway we could and our network of sports professionals is coming together to support this record run.” The website was set up to help runners find quality sports therapists in their local area and is doing the job for Dan.

Last night (17 August) Rob Mather stayed up way past bedtime to help the tired long distance athlete when they reached Leyton. It was dark and raining but Mather was on hand to provide vital assistance to Lawson. The power of the community

The running community across the country is showing just how great it can be by coming out to join the team for a few miles.

Support crew member Mick Seymour mentioned that “Dan’s been finding the evenings tough. Every day he jumps out of the van at 6am raring to go, but as the day goes on it gets tougher. Last night around Lancaster we were worried but then Dan came round the corner with two other runners.

“It was like he was a new runner. He was smiling, joking and moving so well. The difference some company can make to the record attempt is huge and we’re urging anyone who can get out to share some miles with Dan this weekend to please do so.”

If you or anyone you know can join the party then get on it. It will really make a huge difference to this historic record attempt.

You can track Lawson’s live location here on Open Tracking.

As the run crosses 500 miles you would imagine that more and more media outlets would start covering the attempt. Yet in recent years fraudulent claims at the record have burned those who reported and it is just another example of the harm these liars cause that Lawson is not getting the UK wide coverage he deserves. Fast Running will continue to blow the horn for this brilliant athlete and you should too.

We’re watching one of the greatest feats of endurance in recent years unfold. The run is spanning the length of the country and it is being done at a phenomenal pace. This isn’t just a multiple marathon challenge where everything is done at a comfortable pace, this is ultra running at it’s toughest.

Averaging 90 miles a day for nine days is the goal. Lawson has already finished five days of this huge asking and with everyone’s help he can break this record.

To top it all off the ReRun clothing athlete is running every step in second hand clothing. There’s not been any need for fancy, brand new kit to get the south coast athlete moving each day.