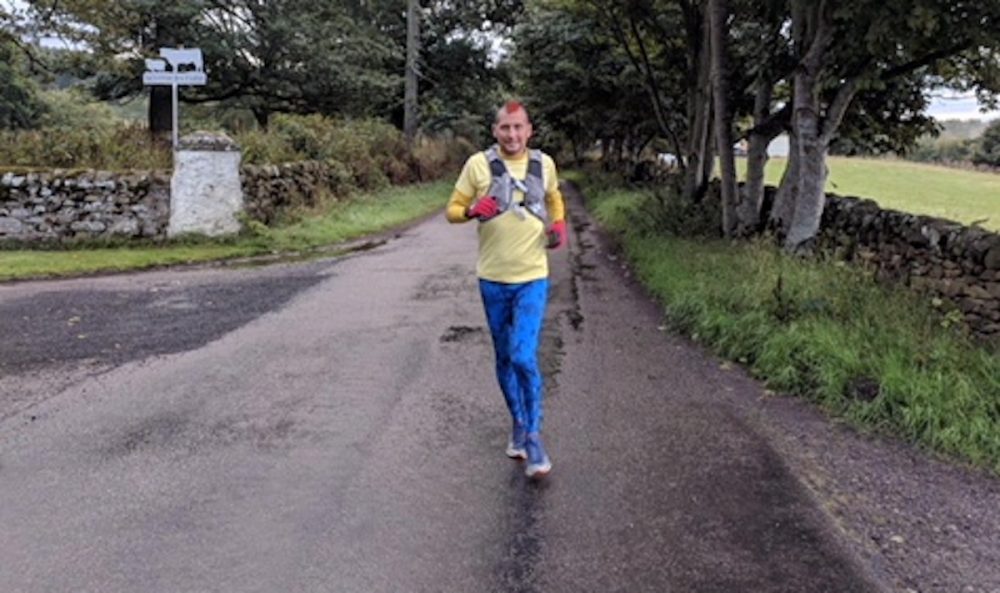 British ultra runner Dan Lawson has started his attempt to break the 874 mile record for running from John O’Groats to Lands End.

The former European 24hr champion started his John O’Groats to Lands End (the JOGLE) attempt from the northern tip of Scotland on Monday (August 13) aiming to break Andi Rivett’s record of nine days and two hours. The record has stood since May 2002.

“Why not?” said the Great Britain athlete. “I’ve thought about giving it a go for a while now and it just unfold that this year there was time to really give it a crack.”

“I’ve been inspired by Richard Brown [former JOGLE record holder] and his stories of the record run. It’s an iconic British ultra run and something I’ve always dreamed about trying.”

Richard Brown, still the British 48hr record holder, held the record twice. Famously losing the record to Don Ritchie one year Brown send a congratulatory letter telling Ritchie “congratulations on your record, enjoy it until I get it back”.

Long legged Brown is a fantastic character and is a driving factor behind a strong British 24hr running scene currently. As team manager he inspired the likes of Lawson into the 24hr format and his support over the years for British ultra running has been phenomenal. The Dorset based walker/runner will be joining the JOGLE attempt for the second half.

Having run and walked the route in 10 days, 2 hours and 25 minutes, Brown will be able to provide advice from extremely high quality experience.

Several have attempted the JOGLE record in recent years, but mostly hugely underestimating the task and the record. One even saw a runner seemingly travel in a van, another resorted to using a bike.

Lawson is one of only a few runners that might legitimately have a chance of breaking the record. His pedigree includes multiple world class performances over the ultra distances. These include a European 24hr Championship, a course record at the 400km Ultra Gobi desert race and under 24 hours for the historic Spartathlon.

“Dan is probably the UK runner with the best chance of breaking such a stout record,” said Fast 10 runner James Stewart. “It’s an itch I personally have too so I’m watching Dan’s progress furiously each day. Luck will play a part but f anyone can challenge this FKT it’s Dan.”

When asking the runner what he was most looking forward to one might expect him to mention the finish, but “the journey is what drives me. It’s going to be so wonderful to really get to see the whole of the island and watch landscapes slowly change.”

“The crew is everything too. I’m looking forward to sharing this journey with them and I wouldn’t be able to attempt such a record without their help.”

Lawson will be assisted by his wife Charlotte Jalley, former record holder Richard Brown, Great Britain crew chief Michael Seymour and a whole host of experienced and friendly faces along the way.

The runner’s biggest fear? “My biggest fear is letting the crew down. They give so much time and energy so I want to give it my best effort in return.”

Also worth mentioning is that Lawson will be running the whole attempt in second hand, or pre-loved, clothing. The social enterprise ReRun Clothing  was set up by Jalley and Lawson as they saw a huge amount of waste within the running industry.

The biggest  number of donations the team have seen are old race t-shirts. Everyone reading this probably has a handful sat in their cupboard too. Their aim is to raise awareness of the wastefulness within the running industry and try reduce this.

Anyone who’s a fan of dot watching (it’s more addictive than you think) can follow the record attempt via Open Tracking here.

Lawson is currently approaching Inverness on day two of his epic run, having covered around 90 miles on the first day.

The team is also aiming to update to Strava during the run and day one can be found here.

Fast Running will attempt to bring regular updates of the runner’s progress across the country and insights from the crew during the nine day record attempt.