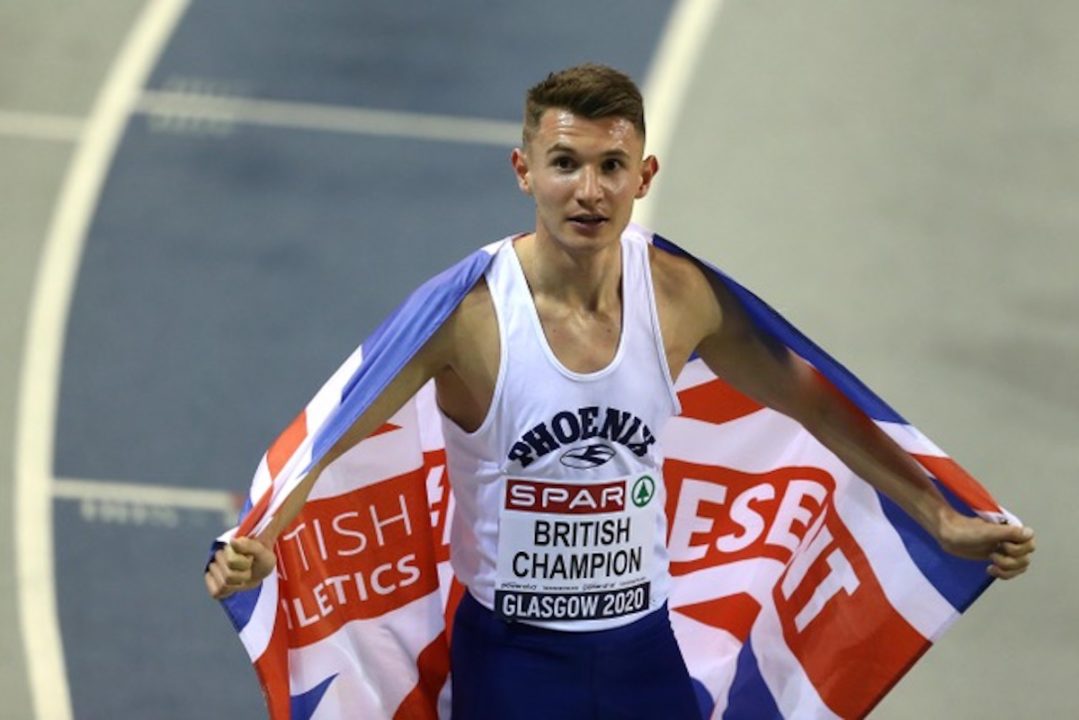 After a stellar race at the British indoor Championships and in such unprecedented times, George Mills talks to Fast Running about his recent indoor track achievements, his goals ahead and how he is dealing with uncertainty.

After two years of injury followed by a year of consistency, Phx Trk athlete, George Mills (coached by Jon Bigg), came back with an incredibly strong performance. He secured himself the British Indoor title in the 1500m before the racing scene came to a halt with the arrival of Coronavirus. Mills boasts a rapid indoor 1500m PB of 3:39.25 and an indoor 800m best of 1:48.36, all recorded this year.

Fast Running: How are you coping with the current situation?

George Mills: Alright, just trying to go on as normal. We trained on the track yesterday, but everything is changing day by day, so no one knows how it is going to be tomorrow, or Saturday, or by next week.

FR: What was it like for you to become British champion?

GM: It made me really proud and it was a massive achievement for me. It was something I’ve always wanted to achieve and do, and it was awesome to actually be able to do it indoors so early on in my career.

FR: Were you expecting such a result?

GM: To be honest, the indoor season started with me wanting to get to the British Indoor Championships with a chance of making the world indoors team, but obviously after that got cancelled because of everything that is going on, I still wanted to do the trials to gain experience. So, I turned up, and thought, I’ve got a chance this weekend if I perform and stick to the plan, I can see what happens. Although, it was more about learning and getting as much experience as I possibly could.

FR: When did you think winning could be possible? Was there something in training that made you think you could do it?

GM: I had been training well since I came back at the start of this season in September last year. Training had been going well throughout that period and I had a good training block. The group (Phoenix Track Club/Phx Trk) went out to Dullstroom on a training camp in November/December and that went really well.

It was also a great experience to learn from some of the top guys in our group. To be honest, throughout the indoors I had a few races, was running well, and sessions were good. The week before British Indoors I got a call to go to the Indoor Grand Prix where I ran 3:39, and that kind of put a time down for the sort of shape I had been in within training and I think that made me more confident going into the British Champs.

To think that if I perform well, stick to the plan, and do my best, I have a good shot here, but I was just going to see what happened.

FR: Was this your first time committing to the indoor season?

GM: I did indoors a bit last year, but as I was coming back from two years out injured, it was more about learning how to race and learning processes about that again. This indoor season was similar, it was about refining those processes, like with warm up and recovery and learning more about different races. I was definitely in better shape going into this year’s season than last years, but that was just because I had a full consistent year of training behind me and last year’s outdoor season.

FR: Do you think it was the consistency that helped you perform how you did?

GM: Oh 100%, consistency is essential. If you can stay healthy and injury free, then that is all you can ask for. I think that is the most important thing to focus on. If you can train hard and do the volume that your coach wants you to do and stay fit, you are perfect. That is the scenario that you want.

When I first joined Phx Trk in September 2017, I basically fractured by sacrum as soon as I joined within a few months and then in May of 2018 I tore my hamstring. My first year was very up and down, but after that injury I was pretty much consistently fit then all the way through. I did my first race season under John last year, so this is my second full year of being able to compete under him.

FR: Despite the uncertainty, what are your goals going forward?

GM: After indoors it was about getting to the Olympic trials in the best shape I possibly could and peak there and perform to the best of my ability, so originally, we had planned to go to Flagstaff in Arizona on a training camp and then race out in America in April/May time, but obviously with what is happening now, that isn’t going ahead.

Now it is just about kind of waiting to see when you can race, because obviously they’ve cancelled a lot of Diamond League’s and they’ve cancelled lots of meets in the UK as well, so there is quite a lot of uncertainty around it, so you have just got to put yourself in the best position to be able to perform when you do have to perform, but we don’t know when that will be and everyone is in the same boat. We just have to be as prepared as we can.

For as long as we can it is important for us to be able to use the track regularly, but I think it’s a matter of when not if everything closes, then I think we will have to reassess the scenario then. Until then, we just want to keep pushing forward, especially with the IOC saying that the Olympics is going ahead as planned.

FR: Are the Olympics your big goal for now?

GM: It is a bit of a long shot to think that I would make the Olympics, obviously I haven’t run the time and I wasn’t anywhere close last year, but after a good indoor season and a good training block it is just something that is always in the back of your mind and you are thinking about, you never know. For now, it is just about making sure you are healthy and listening to the government’s advice is the most important thing.

GM: So, previously, I’ve always raced 800m. It was only in the last year or so I have started to do more 1500s. I really enjoy both and I am open to doing whichever I am going to be better at. At the end of the day everybody wants to win and perform well. The way I train for 800 and 1500 and how my body responds is quite similar, over both areas, so there is a nice cross over in both. So, if I’m running well in the 800, I will probably run well in the 1500 and vice versa. I’m lucky in that sense, so I will hope to do both and see how things are going and go from there.

FR: How are you making sure you keep your motivation high when there is so much uncertainty around racing?

GM: I’m very motivated as it is, that just comes from me. I am wanting to be the best that I can be in anything that I do, but also even if there are no races this year, what you do over the summer and in this period will have an effect on what you do next year.

I missed two years racing, so whatever happens I’m still going to train all the way through this year and even if there is no racing, I will come back at the start of next season and keep trying to push, so I’m just trying to improve every week and every month.

You’ve got to try and take the positive from every situation, this probably allows us a bit more time than we originally had coming off of the indoor season, but again we don’t know what things are going to look like tomorrow.

FR: Do you have any key supporters/sponsors?

GM: I have a very good relationship with Nike, they have helped me out for probably about 4 or 5 years now, so I have a long-term partnership with them. That works really well, and they help me out with all my kit and race kit. I’m part of Phx Track which is Nike backed. There is a big group of us down in Brighton, about 8 or 9 of us, and we do pretty much all of our sessions and long runs together.