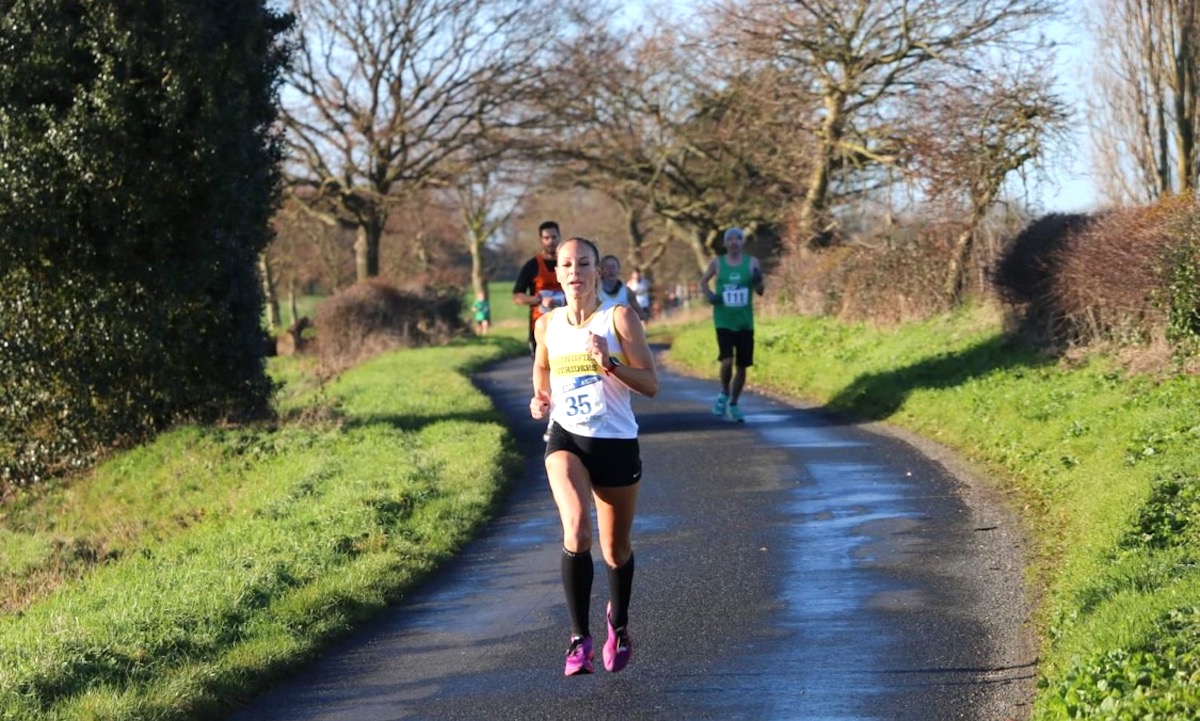 In between Christmas parkruns and Christmas puddings, James Rhodes has kept his eye on all of those who want to keep running fast in the holiday period.

How do you know it’s the Christmas period? The food, family, frivolity? Well, yes, but if you want to put a running spin on things then it’s also when athletes take to the streets of Blackburn for the Ribble Valley 10k.

It was a commanding victory for Jess Warner-Judd in the women’s field, her time of 31:18 seeing her cross the line over a minute and a half ahead of anyone else.

That is the second fastest of Warner-Judd’s career, twelve seconds shy of her time at the Trafford 10k in March, and is a mark only four other British women have bettered. It also improved Jess Piasecki’s course record by 20 seconds. The post-Christmas outing brings to a close a fantastic season on the roads, track and cross-country for the recently married athlete (who’s husband, Rob, finished seventh overall). Continuing her fine resurgence, Gemma Steel (32:57) matches her time from Telford a fortnight ago to finish second, equalling her fastest outing over 10k in six years. Things you love to see! Behind her was Mollie Williams (33:32) to complete the top-three.

The first male across the line was Calum Johnson (29:10), equalling his lifetime best set at the Great North 10k in July in the process. It’s been an excellent year for the Gateshead Harrier, which has seen a move from the track to road and cross-country racing only. Highlights include a ninth place finish at the Great North Run, fifth at the Great South Run and a 2:17:42 marathon debut in Wrexham back in April.

In his first race on English soil in 2022 after moving across the pond to study at Oklahoma State, Morpeth Harriers’ Rory Leonard ran a PB (29:40) to finish second. That time is a 38 second improvement on his 2020 lifetime best, also his last race over the distance. The top three was completed by Matt Ramsden (29:50), his time also a PB that improved his previous best by seven seconds. The U20 Blackburn Harrier has raced at every distance between 400m on the track to 10k this year, and set PBs at every distance in the process. For all your northwest 10k action we recommend Gary’s instagram.  Photo: Gary Priestley

With the first nine athletes crossing the line in under 30 minutes, and another nine clocking under 31 minutes, it was a competitive race as ever.

Testing Conditions at the Tilli 10k

Across the border in Scotland, athletes were presented with less-than-ideal conditions including a blizzard at the Tilli 10k. In only his third race of the year and first since March, winner of the maiden edition in 2018 Robbie Simpson returned to winning ways after a second place finish last year, recording a time of 31:26.

The conditions removed the chance of a fast time or course record attempt, with the Commonwealth Games representative over 90 seconds down on his time twelve months ago. Behind him was a close finish between Callum Tharme (32:50) and Cameron Smith (32:52).

Beth Garland (36:21) was a clear winner amongst the women racing, with Jennifer Wetton (37:04) second. It was another third-place finish for Yvonne McNairn, matching her position from last year’s edition (37:47).

There has been no shortage of races over the past 48 hours as runners look for a fast time before the year comes to a close, or just an opportunity to get out and race post-Christmas.

Leaving it late for his first 10k of the year, Sam Costley was granted an extra Christmas present when winning the Round the Lakes Boxing Day 10k (31:31). It was a Costley one-two, with Max Costley rewarded with a lifetime best (32:28). The top three was completed by James Baker (33:09). Local athlete Fern Kimber (38:42) took the plaudits in the women’s field, revising her lifetime best by over three minutes in the process. Lauren Baker-Little (39:31) and Louise Fox (40:46) rounded out the podium.

How do they come up with the festive names?

That was not the only race making reference to the festive period, with Peter Chubb (37:28) and Laura Shewbridge (39:48) victorious at the Colchester Christmas Races 10km, Lorna Baird (38:56) and Russell McGavock (33:51) taking wins at the Ayrodynamic Turkey Trot 10k, and Aaron McGrady (56:40) and Diane McKay (64:22) at the Castlewellan Christmas Cracker over in Northern Ireland.

The times on the latter may seem a bit out of kilter, but this is multi-terrain race of 8.5 miles that, according to its website takes in ‘forest tracks, fields, grass, mud and tarmac roads’ with plenty of elevation. I often make reference to the margin of victory in races, but I think it is justified in the case of Oscar Farley at the Colchester Christmas Races 5k, his time of 16:56 not only a PB for the U17 athlete but saw him finish over three minutes clear of Damian Machlanski (20:00) and Frazer Wilson (21:30). Third overall, Lisa Briggs (21:11) was the quickest woman ahead of Alice Begg (21:46) and Isabelle Bueggeln (23:12).

Witham Running Club hosted their annual Boxing Day 5 in near-perfect conditions, with current course record hold Paul Whittaker quick to establish a lead which he held comfortably to take the tape in 24:26. Pete Coates running in his home race for Witham RC just managed to edge Shane Boxhall of Southend on Sea AC as they claimed second and third in 25:33 and 25:36 respectively.

The women’s race was dominated by Springfield with Sam Bilbie claiming the victory in 30:41 and Jackie Stretton hot on her heels with 30:52. Joanna Bolton of Billericay Striders completed the podium with 32:25. Springfield Striders won both team prizes, with teams comprising Ryan Prout, Chris Burgoyne, Luke Fitz-John and Rob McCoy, and Sam Bilbie, Jackie Stretton, Imogen Ovenden and Emily Smith.

Finally, Dom Coy (38:29) and Alice Leake (47:16) were winners at The Chevin Chase over seven miles, with the Boxing Day Crown to Crown 5k organised by Pitsea Running Club going to Taylor Newell (17:11) and Olivia Forrest (19:36). Ending with the athlete I started this round up with, the course holder at the latter? None other than Jess Warner-Judd!