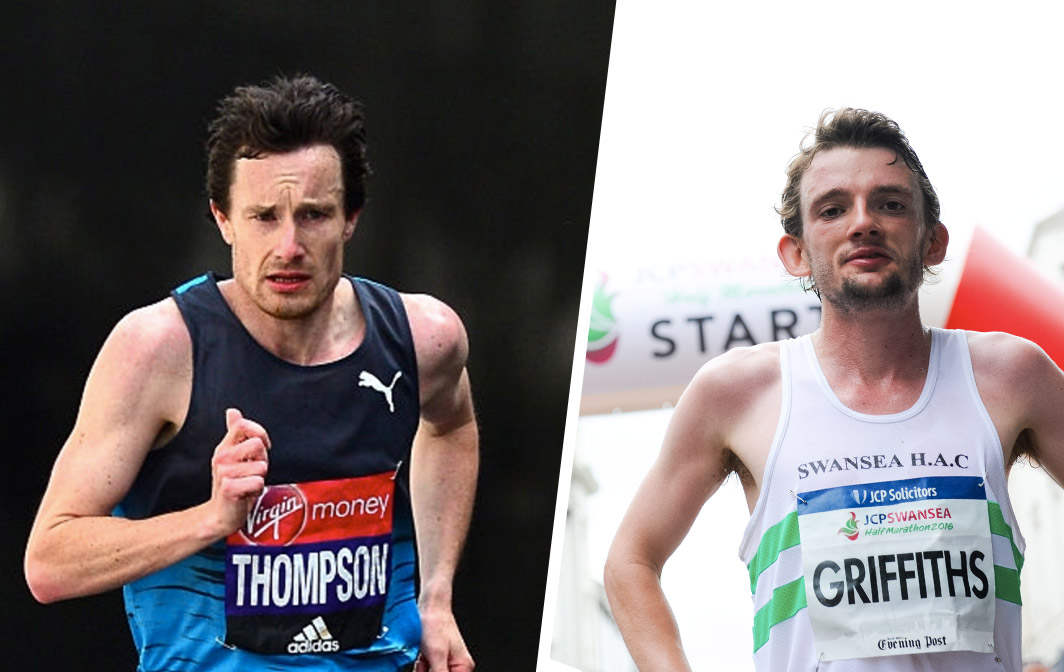 Chris Thompson beat Callum Hawkins to the Great Scottish Run title, and Dewi Griffiths smashes his personal best at the Cardiff Half Marathon.

Great Scottish run, Glasgow, Sunday, October 1
Back racing on home soil it was Callum Hawkins who was expected to take the win at the Great Scottish run. However, under grey skies, it was Chris Thompson who broke away a few miles into the race and held on to take the victory in Glasgow in a time of 1:02:44.

Thompson, who had a below-par performance at the recent Great North Run looked back to his best. He said afterwards, “It was a privilege to beat Callum on his turf .”

Even though Hawkins couldn’t close the gap on Thompson, there was still the Scottish half-marathon championships to contest and with a great sprint finish, he just pipped Tsegai Tewelde for second place, with both runners posting 1:03:18.

Hawkins, who was back racing after a post World Championships break, where he finished fourth in the marathon, said,“my legs just haven’t recovered properly from the World Champs but this race was a good kick-start the season.”

All of the top eight finishers in the men’s elite race were from Great Britain.

Flomena Cheyech Daniel led the women’s race from the start and the race continued in that fashion with the Kenyan clocking 1:10:07 for the win. Daniel said after the race that she loves the crowds in Glasgow but isn’t as keen on the Scottish weather.

After finishing the top Briton at the World Championships in London, Charlotte Purdue showed no signs of fatigue posting 1:12:18 for second place. Just over two minutes behind for third was Shettleston Harriers Fionnuala Ross running a personal best 1:14:26.

It was third time lucky for Ross as she picked up her first Scottish half marathon title, after finished runner-up in the last two editions of the race. The Northern Irish born athlete, who recently spoke to Fast Running about her plans this year, now turns her focus to the Frankfurt marathon at the end this month.

The pace was very quick in the first half with the leaders passing 10k in 28:32 a time fast enough to win most 10k road races in the UK. At 10 miles Kimining surged but it wasn’t enough to shake off the competition, and Lotiang soon regained ground, before taking the lead, before opening a gap of around 25 metres which he held to the finish.

Dewi Griffiths was in the second group passing 10k in 28:52, and from that point, he ran most of the race solo in tremendous fashion picking off some of the earlier race leaders one by one. Griffiths was rewarded with a personal best of 1:01:31 for fourth. Over the last few weeks, the 26-year-old has notched up a series of PB’s from 10k and half-marathon including his run at the Great North Run. Griffiths recently spoke to Fast Running and his interview can be found here.

Charlie Hulson, the national cross country champion in 2015, ran a promising half-marathon debut of 1:05:31 followed by World Championships marathoner Josh Griffiths just outside his PB with 1:05:37.

A few of the top Irish distance runners made the trip to the Welsh capital lead by Mick Clohisy running 1:05:33. Tomas Fitzpatrick followed in 1:09:13 and Sean Hehir 1:09:52.

The first 3 Briton’s in the race also took the honours in the Welsh Half Marathon Championships showing great depth and class of the current Welsh distance runners.

Edith Chelimo won the women’s race almost five minutes clear of second. The race panned out perfectly for Chelimo with a great group of top male athletes almost acting as pacemakers before she was rewarded with a big personal best and a course record of 1:05:50. Behind Chelimo was Dorcas Kimeli in 1:10:49 and Beatrice Mutai in 1:10:56.

Jenny Nesbitt was the first British athlete to cross the line taking top honours in the Welsh Half Marathon title in 1:13:22. The second placed Welsh athlete was Caryl Jones in 1:15:24 followed by Elinor Kirk 1:19:22.

Rachel Felton of Shaftesbury Barnet Harriers clinched the win in the women’s race 1:18:54. Taking the win by over 3 minutes.