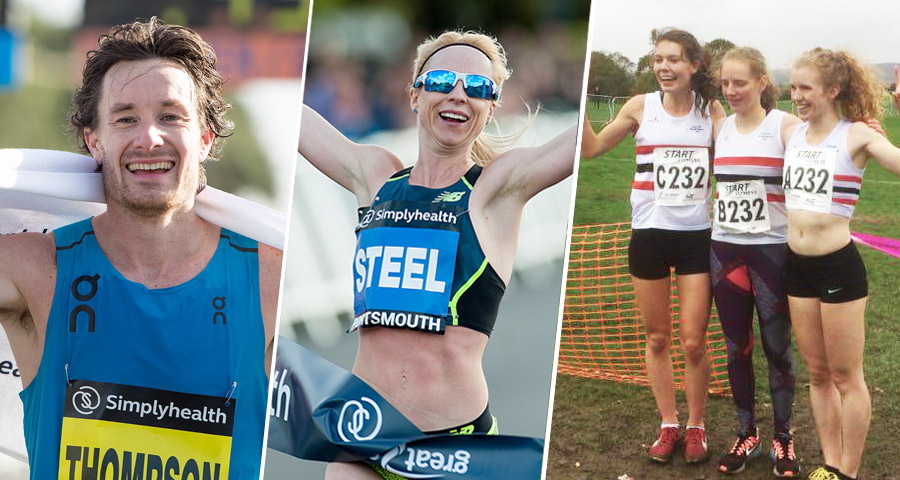 Elsewhere this weekend, Lincoln Wellington AC successfully defended both their senior titles at the Northern Athletics Cross Country Relays, plus a round-up on Bud’s Run, Abingdon Marathon, Stroud Half Marathon and more.

Great South Run – Portsmouth, Sunday, October 22
The remnants of storm Brian made conditions difficult on the coastal 10-mile route. However, like in the rain at the Great Scottish Run a few weeks ago, Chris Thompson proved the strongest of the field and successfully defended his Great South Run title. 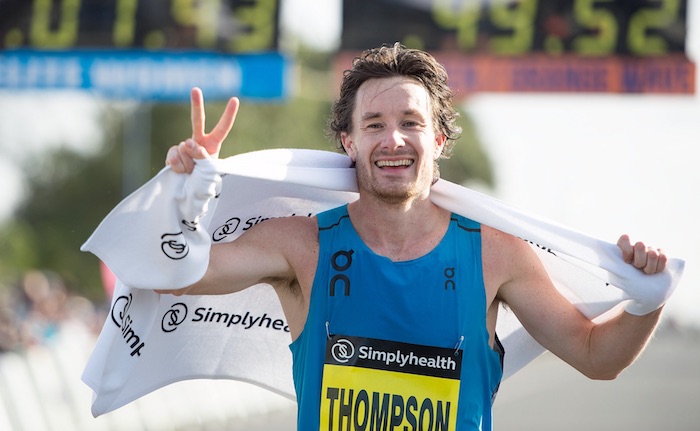 The Aldershot Farnham & District athlete is the first winner in fourteen years to win the event for two consecutive years. In very windy conditions Thompson set out at around five-minute mile pace into a strong headwind. At the four mile mark, there was a group of around seven athletes including; Matt Sharp, Ben Conner and Mick Clohisey. Connor and Thompson pushed the pace and soon found themselves running side by side with a small gap back to Matt Sharp.

The wind and possibly the early pace told coming into the final mile. Thompson made his move and maintained the solo effort all the way to the line, taking the win in 48:32.

Matt Sharp, in the closing stages, found some extra reserves and passed Ben Connor in the home straight to finish second with 48:35, an impressive run just four weeks after his 2:16:02 marathon in Berlin.

A tired Connor held on to third with 48:36. Behind Connor, like at the English National Cross-country this year, Alex Teuton of Southampton AC finished fourth.

The women’s race again came down to the final mile, with Gemma Steel catching long Lily Partridge to take the win. 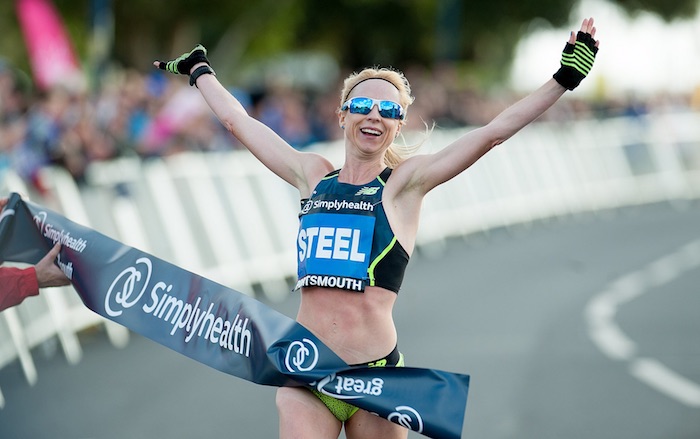 Partridge had broken away from Steel and Charlotte Purdue at mile seven, with only Steel able to keep the 26-year-old within sight of catching.

As the pair came into the final two-mile seafront stretch Steel’s experience and race tactics came to the front over the last half a mile to pip Partridge, breaking the tape in 55.25. Partridge held on for second in 55:37, with club mate Purdue taking third in 55:43.

It was to be a third relay medal of the autumn for the Lincoln Wellington men, adding to their Northern Road Relay title won in September and their bronze medal from the National Road Relays. Joe Wilkinson got Lincoln off to a great start winning the first leg by seventeen seconds from Jamie Roden of Sale Harriers, Manchester. Lincoln lead from start to finish in a dominant display of cross country running over the 4x2mile event. Preston Harriers took the silver with a great last leg from Patrick Dever taking them from fifth to second position by the finishing line. Sale Harriers took the bronze.

The fastest leg of the day came from Lincoln Wellington runner Joe Wilkinson who used his first leg advantage to clock 10:12. The chasing Patrick Dever ran the second fastest with 10:20 on leg four. It was cross country and mountain running specialist Joe Steward of East Cheshire Harriers who posted the third fastest time with 10:29 on leg two. 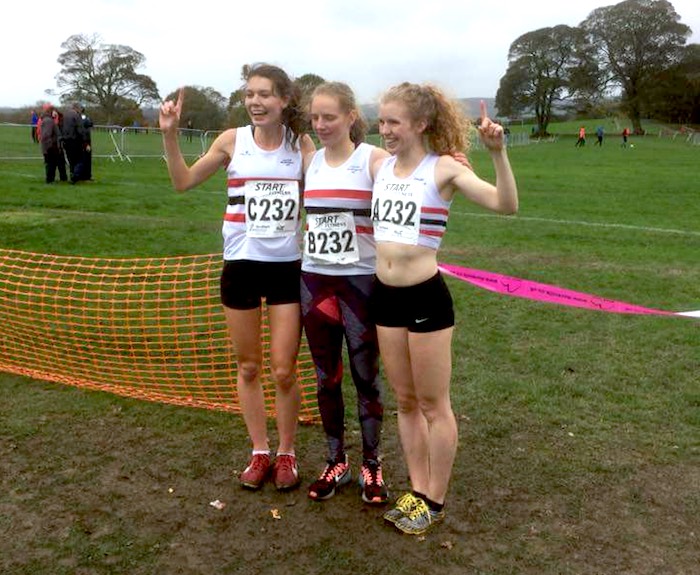 Harriet Knowles Jones of Warrington AC got her cross country season off to a flying start running the fastest leg of the day by 27 seconds with 11:30.

Unfortunately, she was running for an incomplete team but the young talent will be looking towards the European Cross Country Championships where she finished third last year. Abbie Donnelly of Lincoln Wellington AC took the second fastest leg with 11:57 and Lydia Turner of Birtley third fastest with 12:05.

The senior men’s title was won by Hillingdon with Mohamed D Mohamed sealing the victory on the final leg. Finishing over a minute behind was Highgate Harriers, with Belgrave Harriers claiming third.

Chelmsford sealed the senior women’s title, with Belgrave in second and eleven seconds separating them and London Heathside in third.

The first woman was Victoria Wier from City of Plymouth in 17:19 and second went to Charlotte Penfold of North Shields Poly in 17:44, just in front of Birchfield’s Julia Cooke in 17:49.

Abingdon Marathon – Oxfordshire, Sunday, October 22
The town of Abingdon in Oxfordshire staged another popular event, producing some great performances and times. In the men’s race, it was Tom Charles of Trafford AC who led the field to victory. Just two weeks ago Tom finished runner-up at the York Marathon. To recover and race again so soon is no mean feat but to follow up his time of 2:25:52 in York with 2.29.29 shows fantastic consistency.

Hilary Mott stormed to the win in the women’s race, posting a super quick 2:49:50, like all races this weekend in less than ideal conditions.

David Bell of Cirencester athletics club was second in the men’s race in 1:10:03 from Alistair Cambell with 1:10:35.
In second and third place for the women was Robyn Jackson of Dursley Running Club with a time of 1:25:22 and Tara Grosvenor in 1:25:26.

Other weekend highlights
Only a week after winning Manchester half-marathon, Rebecca Hilland ran a personal best over 10km. The Norway based athlete raced near Oslo at Royse in the Hytteplanmila 10k posting a time of 33:36. Next weekend the Team Bath athlete travel to Frankfurt and in current form will look to lower her marathon time.

Away from the UK racing scene, two world records were broken.
Kenyan Joyciline Jepkosgei improved her own world record by one second to win the Valencia Half Marathon in 64.51.

At the final of the Vertical KM World Series, in Fully, Switzerland Philip Götsch of Italy won in an astonishing time of 28.53, setting a new world record for the event – a vertical km consists of 1000m of elevation in as short a distance as possible.