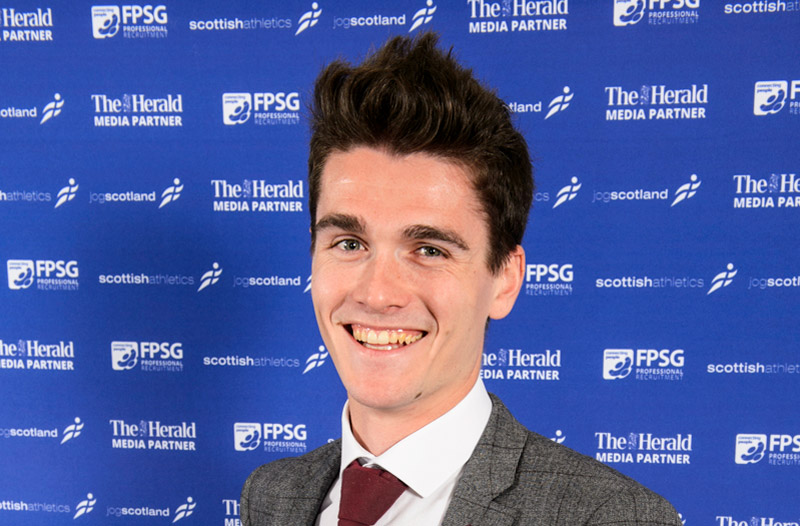 Callum Hawkins won the 2017 FPSG Scottish Athlete of the Year award last night (November 4) and credits returning to Scotland from college in America five years ago as key to his success.

“I look back now on things that happened a few years and think they happened for a reason,” said Hawkins, last night at the scottishathletis Awards Dinner.

“I have thought for a while now that if I hadn’t come back to Scotland when I did, I probably wouldn’t be running now. I’ve had two knee operations and have been quite fortunate to get back. And actually to get to a higher level than before.

“I am absolutely delighted to win the FPSG Athlete of the Year award for 2017,” added the 25-year-old,” who flew in from altitude training in the Font Romeu to attend the awards.

Hawkins, who finished fourth in the marathon at the World Championships in London this summer beat off strong competition from Laura Muir, Chris O’Hare, Eilish McColgan and Sammi Kinghorn for scottishathletis top award.

The Kilbarchan AAC athlete had a fantastic season which saw him set a Scottish record for the half marathon after clocking 60:00 at the Kagawa Marugame International Half Marathon in Japan at the beginning of the year. This summer in London Hawkins ran a marathon personal best 2:10:17 missing out on a world medal by 26 seconds. 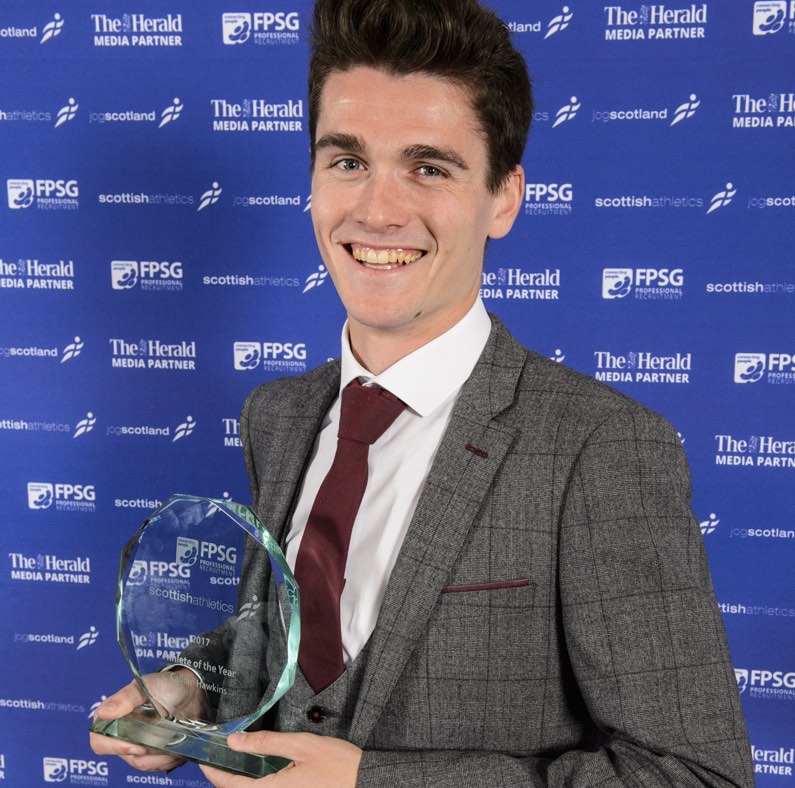 Hawkins became the first male to win the award since hurdler Allan Scott back in 2008 and the 25-year-old admitted he’s thrilled the way his career unfolded after a move to Butler University in his late teens went sour as he underwent knee surgery on two occasions.

Looking back to his time in the America, Hawkins added: “It was while I was at Butler University that I damaged my knee and I still don’t quite know how it happened. I’ve an idea but it was puffy for a year and a half and then, via ultrasound, we found the cartilage had been torn. The first surgery was in 2012 and I didn’t really get back into my running until well into 2014 when I ran the Glasgow 2014 qualifying time in California. So that was two years just to get back to where I had been at.

“I probably wasn’t the best behaved to be honest, when out there in America. The lessons helped make me the athlete I am today and I have no regrets.

“There are different routes you can take. You look at Chris (O’Hare) who was over there young and went right through the system and now Josh is doing the same. Luke Traynor isn’t quite the same profile but I think he has benefited a lot from being in America, too.

“And then there’s Laura (Muir), Andy (Butchart) and myself doing it more based in Scotland and in a slightly different way.

“I think times are changing a wee bit and young athletes are seeing various ways to do it and that leaving Scotland is not necessarily the best option for them. Hopefully, Brits and Scots are showing we can compete at the top level globally.”

Making it a double for the Hawkins family, Callum’s father/coach Robert landed the Performance Coach of the Year award for 2017.

Hawkins further added: “I took a lot of confidence into 2017 after winning bronze at the Euro Cross last December and then running well at Holyrood Park at the start of the year. It wasn’t beating Mo Farah, because I don’t think he was really in shape at that time and it would be wrong to claim otherwise, but it was the performance and going so close to winning that day which added to my belief for 2017.

“Then the two half marathons in Japan and New York set me up for the summer in London. Overall I have to be pretty satisfied with the way the year unfolded.

“Now it is all about getting ready for the Commonwealth Games marathon and seeing what I can do out there in April.”