A golden performance from British quartet to win world title, as Usain Bolt pulls up injured 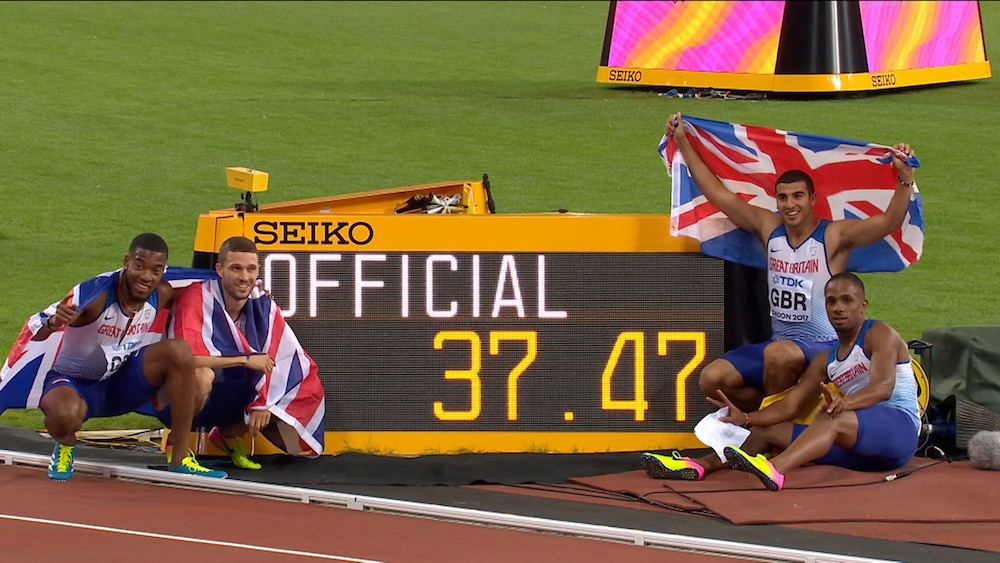 In front of home crowd it was a golden performance for the British quartet to clinch a first ever 4x100m relay gold, while Usain Bolt pulled up injured in his last race.

Chijindu Utah stormed out the blocks to lead a near-perfect display from the British relay team. As the baton was handed off to Adam Gemini for the second leg there was a sense something special was about to happen.

Danny Talbot was next up running a flawless bend, before handing off to Nethaneel Mitchell-Blake who had enough to hold off the 100m silver medallist Christian Coleman, finishing with a perfectly timed dip to win gold for the British quartet, clocking 37.47.

It was a world leading time, British record, European record and leaves GB the third fastest relay team of all time.

Bolt, the eight time Olympic gold medalist, pulled up injured running the anchor leg for Jamaica, as he tried to chase down Britain’s Mitchell-Blake and USA’s Coleman.

A wheelchair was brought over to Bolt but he waved it away, hauling himself up to limp across the line before applauding the crowd.

It was a tragic ending to the 30-year-old’s glorious track career, as he retires from these championships with only a bronze medal from the individual 100m.

Britain’s Nethaneel Mitchell-Blake, final leg sprinter, said: “I wasn’t sure if I had won or not, I gave it my all but I could see Christian Coleman out of the corner of my eye. The feeling of euphoria was from infinity. I can’t register it. We smashed the British record to pieces.”

The GB quartet went one better than their bronze at the Rio Olympics last year and the world bronze they bagged in Beijing in 2015.

In the final leg, Neita give it her all as he faced 100m world champion Tori Bowie, with the USA star just pulling away to cross the line in 41.82 for gold.

“A great effort between the team and even better for the boys,” said Neita.

Asher-Smith, who has had a number of tremendous performances in London after battling back from a broken foot, said: “I think I’m still in a dream phase, because I didn’t even know if I was going to be here and then suddenly I was like okay if I go and do the relay, I might hopefully get a run, because I might not be fast enough to be in the team.

“To transform that to winning a world silver which is the highest medal we have ever won is absolutely incredible. I’m still very much in a dream state.”

Jamaica took bronze in 42.19, to conclude a disappointing championships for the sprint nation.

In total Britain won three medals on the penultimate day of the World Championships, the two relay medals adding to the silver Mo Farah won in the 5,000m final.

Mo Farah denied fourth consecutive 5,000m title, as Edris wins gold at the World Championships
Not how Usain Bolt wanted to bow out, as the greatest sprinter of all time pulls up injured