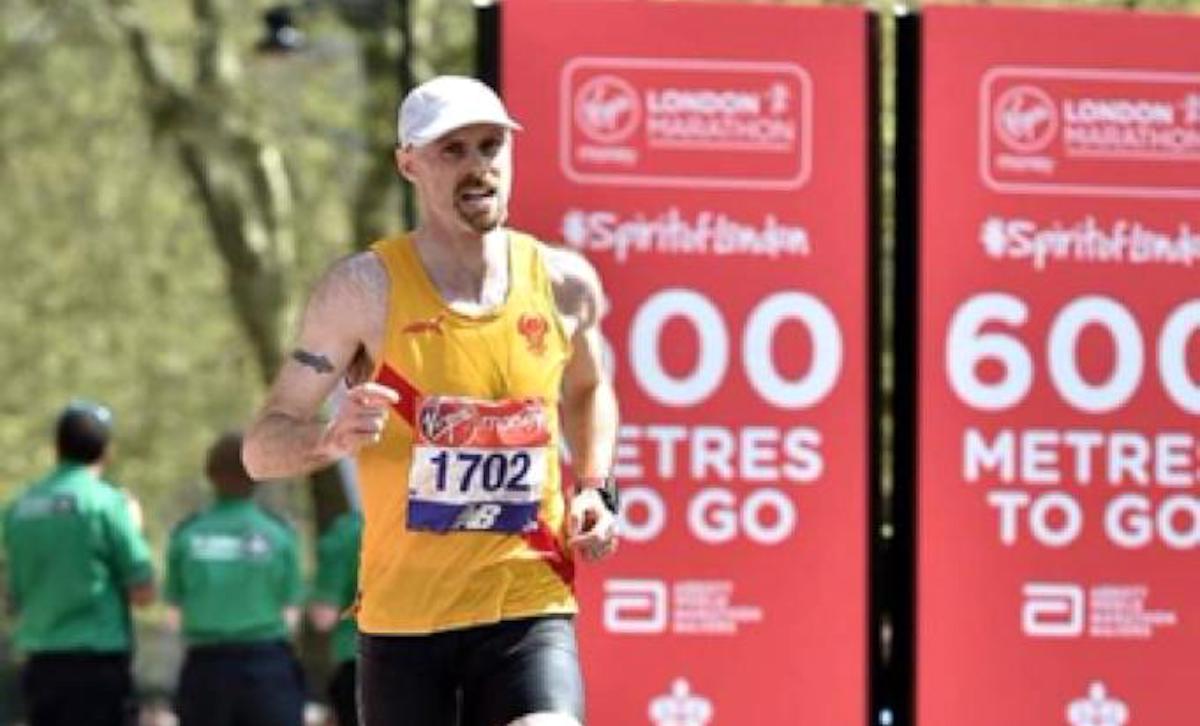 We're not sure if Richard is prouder of his 2:23 at London or his new 5k World Record. It's a tough call. Photo: London Marathon.

The inaugural #RossBarkley5k Championships are warming up for the weekend but Richard McDowell has already clocked a 10:57.

Warning: This article repeatedly features a rude word, but it would have felt a little silly to edit it out each time. Also please remember it’s all a bit of fun.

The brainchild of @StravaWankers, an important investigatory Twitter account that keeps the virtual racing world honest, the Ross Barkley 5ks follow on the Chelsea midfielder’s “impressive” 16:11 5k run that made national newspapers, which was in fact a series of stopping and starting.

As incredulous club runners took to social media to respond to statements such as “If he’d run on a track Ross’ time would have put him in the top 30 times for the year”, which is mainly down to the fact there hasn’t really been any UK track races this year, just a few Brits running in the US collegiate system. Oh and because it was an interval run.

Barkley is a fine footballer and the 5k of interval running most certainly would have been a more specific workout for the premiership footballer anyway, so we hope he’s simply honoured to have a virtual 5k event named after him. It looks like the actual workout was a 1 mile hard, 2 x 1km efforts and then a bunch of sprints to get to the five kilometre total.

Back to the main event

So now to our new WORLD RECORD (capitals necessary). The challenge set by @StravaWankers was for runners to see just how fast they could run 5k if they ignored “elapsed time” and just focused on the moving time. The rules were purposefully loose and we should remind at this point that it is all a bit of fun. The bar was set high early on when City of Norwich’s Nick Earl, himself a 2:14 marathoner clocked an impressive 12:05, well over 30 seconds off Kenesisa Bekele’s seemingly unbeatable mark from 2004. The Ethiopian ran 12:37.35 in a meet at Hengelo, in the Netherlands.

In a move similar to the IAAF’s reseting of Road 5k marks, which has seen a host of athletes like Joshua Cheptetkei break the “world record” just a couple of months ago with 12:51 in Monaco, the Strava Wankers loosening of the rules is “just a natural progression for our sport, just as the Nike Vaporflys were” said a virtual IAAF spokesman who doesn’t actually exist.

Earl’s mark was set on a track and his moving time of 12:05 meant an average pace of 2:24/km. That’s fast, but it was felt that if the right individual came along the mark could be beaten. Enter Richard McDowell. Nothing dodgy about this 5k Strava map at all…

The Hercules Wimbledon runner is no slouch, with a 2:23 marathon best and some good leg speed over 800m with a 2:08 back in 2017, but it was certainly a case of brains over brawn that saw the V40 athlete succeed.

Taking the marginal gains to the limit and operating in the “grey area” that many feel is the future of professional sports, McDowell used a short downhill section of tarmac to nail it downhill, pause his watch before any slowing down and then casually saunter back up to the top of his personal summit before starting the next section of his own 5k. The smart way to run a Ross Barkley 5k… all downhill intervals.

Breaking the mythical 12 minute mark wasn’t enough, with the sub 11 barrier smashed through as well. 10:57 is potentially a mark that could stand for generations, or someone else with a fair bit of time on their hands might have a crack this weekend.

“After smashing Bekele’s 5000m record, it’s a shame that London is looking unlikely as I would almost certainly take him down” said our new world record holder McDowell. “A friend suggested that I could aim at Kipchoge’s 1:59 record, 140 reps at the same pace would result in around a 1:34 marathon, but would take around 9 hours to do”.

Well given that Kipchoge’s mark wasn’t record eligible Richard it seems like a fair competition.

“We’re delighted the record went so early” said the mastermind behind the Strava Wankers account. “Maybe the likes of Marc Scott, Nick Goolab or even the great Kenesisa Bekele himself could target a sub 10 to get his record back?”

The future of #RossBarkley 5k running

Why stop at endurance runners though? Even though your middle distance men might be the first thought of,  surely, given enough time, someone like Usain Bolt could really set a solid time? 50 x 10 seconds (he can’t go full out every time), with maybe a couple of days to keep the watch running, would be 8:20. This is the future we all wanted right?

Or should we be looking to the fells? Having seen Ricky Lightfoot fall like a stone done the side of a mountain could the Cumbrian firefighter have a sub 10 in there too? Could a fell runner or Kilian Jornet be the one to break the 8 minute mark? The world is their oyster.

All we can do is wait for the weekend and see if the big guns take up Richard’s challenge. Shots have been fired and the competition is well and truly underway.

The women’s competition is only just starting too and maybe we’ll see a new world record there? It’s also possible it’s only us blokes who are stupid enough to try.

EDIT: McDowell’s record seems to already have been beaten by Jonny Currie with a 10:48 and a more impressive 1:52:08 elapsed time. Will either be in the top ten by the end of the month?