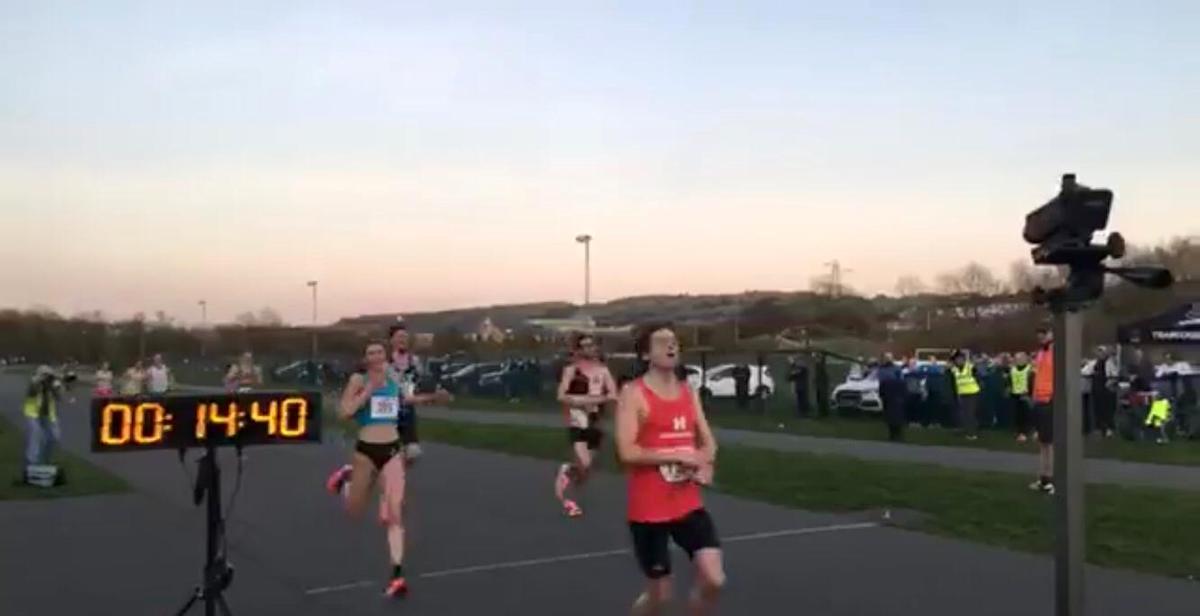 Scottish athlete Beth Potter ran 14:41 at the Podium 5k race this Saturday night and broke the British and World record for road 5k.

In a mixed event Potter crushed towards the line with the clock still well under 15 minutes and even she looked surprised to see the clock show such a fast time.

As the results come through we will update and bring more information, but according to RunningLive’s Dave Norman Potter knew she was in electric shape and asked to join in the faster sub 15:30 race.

Conditions were perfect for fast running and the strong group went through the first kilometre in 2:46 and Ben Riddell, who finished in a PB of 14:46, said he and Potter went through 3k in around 8:40.

The 29 year old 2016 Olympian had run 15:24 at the same event last year and is currently focusing on triathlon, but as we saw with Steph Davis at the marathon trials recently, a bit of cross training can be a wonderful thing.

Yes, Potter is in new era Asics MetaSpeed shoes, but even so, they didn’t carry themselves 5,000m around that race and the hard work and dedication of the athletes cannot be ignored.

There has been some confusion around licensing with suggestions the race only had an Association of Running Clubs (ARC) license and would not be recognised by UK Athletics (UKA) but it seems there was a full UKA License listed on Run Britain for the event.

Podium 5k did tweet that there was full licensing for the event. Although it seems unlikely that everything needed for ratification of a world record, such as drug testing, was in place, simply because this is a far greater result than anyone expected. Even so, it will still be a brilliant PB and should feature on top of the British all time list.

With this being one of the first events in quite some time it seems all the hard training is paying off as swathes of runners ran PBs, with Potter’s race won by Lewis Gamble-Thompson in 14:25, a big chunk of his previous road 5k best.

The Men’s A Race

A fast pace was also set for the Men’s A race with the likes of Tom Mortimer, Phil Seseman and Jonny Brownlee in strong form. It came down to a two man shoot-out between Mortimer and Seseman, both dipping under 13:40, but Mortimer taking it at the line.

Full results for Potter’s race are here and the full evening of events here.

When full results are published we will update this article with a link and more information.