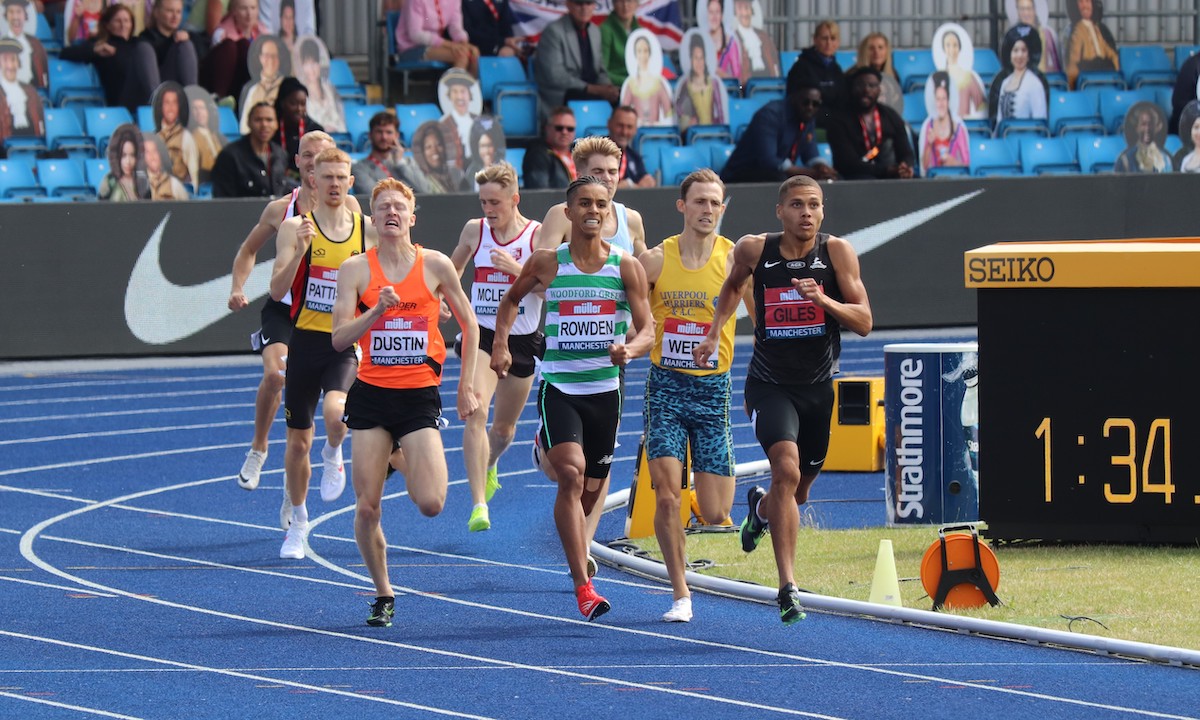 We gave James Rhodes a challenge, to review the whole year in a set word count. One out of two isn’t bad. Sit back, relax and re-enjoy the first six months.

By the time the clocks strike midnight on Friday, 525,600 minutes will have passed since New Year’s Day.

In many ways it has been a year like no other, a rollercoaster for anyone invested in this sport, not helped by the uncertainty and restrictions associated with the continuation of a global pandemic.

Events cancelled, races postponed, goals put on hold. Dreams dashed by the closing of stadium doors, or the ping of a Test & Trace app. Parents unable to reap the reward of the sacrifice and passion of their children in person, and athletes unable to fully celebrate defining moments in their careers.

Despite the uncertainty, the sport pulled through and delivered when it mattered most. Athletes maintained focus and determination, training despite not necessarily knowing what they were training for.

It wasn’t just the athletes, though. Event organisers, officials, volunteers and coaches played invaluable roles in ensuring that, when the time came, athletes could perform to their best. Their contributions to provide racing opportunities despite endless red tape will never get the recognition deserved.

This collective effort meant we were rewarded with spectacular performances on the track, road and cross country. As the year draws to a close, I look back at some of the year’s highlights, starting with January to June. The year started with racing again off the agenda as England entered its third nationwide lockdown. Another anxiety-inducing period, no doubt several times worse for those expecting 2021 to be the pinnacle of their careers.

It was looking good, too, with the Bryggen Sports 3000m in Manchester on 2 January. Who was to know that would be the month’s only track racing in England? The sparsity of races meant the Instagram livestream was well viewed, even if Jonny Mellor did drop his phone from the balcony onto the track midway through the races.

Paul Martelletti’s Strava kept us entertained from quarantine in New Zealand, a week with over 150km on a 150m car park loop, including a 142 lap-half marathon that helped one to realise the 25 laps of a 10,000m could be worse.

The absence of physical events meant virtual races remained in vogue. 2,450 athletes ran five miles at a location of their choosing for the England Athletics Virtual Road Relay​, whilst the Scottish Athletics ​Lindsays Virtual Road Challenge ​filled the racing appetiten orth of the border.

Whilst not strictly virtual racing, Florian Neuschwander broke the 100km treadmill world record, and the thought of covering a tenth of that on a treadmill makes me shudder.

Early indoor highlights included a startling 1:59.03 by Keely Hodgkinson at the Vienna Indoor Classic to better the 800m World Junior Record by two seconds. Perhaps Keely’s fate was sealed when she was born the day the 800m World Indoor Record was set.

Athletes studying in the States made the most of the American collegiate system’s racing opportunities, including Stephanie Moss at the Wooo Pig Classic. I really just wanted a reason to write Wooo Pig Classic. If January provided the appetisers for indoor racing, then February delivered the main course.

Summarising Elliot Giles’ 800m win, I wrote “you can’t help but feel Sebastian Coe’s National Record of 1:44.91 set back in 1983 is on borrowed time”. Call me Mystic Meg as, eight days later at the Copernicus Cup in Torun, Giles broke the record over a decade older than him, becoming the fastest Brit indoors or out for 31 years and going second on the global all-time list.

Adelle Tracey won at the American Track League, but more impressive was 15-year-old Sophia Gorriaran’s 2:02.44 for second. Yes, aged 15. Nick Willis ran a sub-four minute mile, something he has achieved for 19 consecutive years.

With COVID postponing his intended focus on the marathon, Phil Sesemann stepped down in distance with a European Indoors qualifier over 3000m at the Bryggen Sports Invitational in Manchester, one event meaning England wasn’t completely devoid of action.

Staying Stateside, another prodigious teenage was entering the limelight, as American Athing Mu set World Junior Records over 800m and 400m. Could her and Keely ever meet in a race? I wonder.

Valentine’s Day became a day for racing alongside romance, as Beatrice Chepkoech broke the WR at the Herculis 5k in Monaco. Not that you’d know from the coverage, where Paula Radcliffe insisted Chepkoech wasn’t competing, until she crossed the line in the fastest time in history.

There was light at the end of the (domestic racing) tunnel as the Government announced outdoor sports could restart, with England Athletics confirming a roadmap for racing’s return in late March. The European Indoor Championships in Poland provided several athletes with their maiden British vest or their senior debut. Amy-Eloise Markovc, who ran at the World Juniors ten years previously, and Verity Ockenden, who turned 30 in August, perfectly demonstrated that it’s not all about what you do at the start of your career in taking 3000m gold and bronze respectively in their senior debuts.

Keely Hodgkinson took her senior debut in her stride, taking gold in a dominant and tactical win over 800m to become the youngest British European Indoor Champion in 51 years in the first European Indoor final featuring three British women.

Crazily, just five weeks after his first ever 800m, Patryk Dobek won gold over the distance.

It was worth the 515 day wait since the last major championships ended.

Kew Gardens played to the Olympic Marathon Trials, where Chris Thompson made the whole running community smile as he made his third Olympics. At the opposite end of the experience scale, Stephanie Davis ran away from the field to secure her Olympic debut. Men’s marathon winner Christopher Thompson crosses the line and celebrates an amazing week. He has become a father and qualifies for the Tokyo Olympics at the age of 39. Credit: Nigel Bramley

Over two thirds of athletes ran a PB despite the time away from 12.5 laps, with Phil Norman and Jenny Nesbitt fastest at an event that demonstrated the possibilities for domestic middle-distance racing with passionate and dedicated people at the helm.

The States maintained plentiful distance racing opportunities. Marc Scott’s continued fine form saw him go third on the 5000m British all-time list at the Sound Running Invite, an event where Josh Kerr’s season commenced with victory in the 1500m, beating a field including the Rio Olympic gold and bronze medallists.

In the more bizarre, Mo Farah opened his season at the Djibouti Half Marathon in his duty as ambassador for Djibouti’s Ports and Free Zones Authority. Yes, really. April started with a bang, and an advert for Asics’ Metaspeed Sky, as Beth Potter ran an astonishing 14:41 at Podium 5k. Whilst not ratified, that’s two seconds faster than the WR and ten seconds quicker than Paula Radcliffe’s 17-year-old British Record. Three weeks later Beth’s time was bettered as Karoline Grøvdal, in the same shoes, clocked 14:39 at a Norwegian street race.

The Istanbul Half Marathon provided two records, for Ruth Chepngetich over 13.1 miles and for the worst commentary in history. Highlights included repeated confirmation that there was no WR, extensive discussion of Istanbul’s bridges, and line-for-line reading of Wikipedia’s half marathon page. The day that Jake Smith forgot to read his bib before the race. Photo: Mick Hall

After changed dates and venues, the Cheshire Elite Marathon on 25 April saw the birth of the marathon maverick as Jake Smith – instead of pacing to 25km – made his debut to win in 2:11:00, just four days after racing over 1500m. Crazy!

Across the Irish Sea, Emer KcKee won the ChampionChip 5k in 16:40. Astonishing, given she was just 12 (!) and racing a field of adults.

Ending with a slightly longer distance, Aleksandr Sorokin set a new World Best for 100 miles at the Centurion Track 100, his time equating to a mental 6:45 minute mile pace for 400 laps of the track. Ostrava’s Golden Spike is steeped in history, and 2021 was the turn of two British teenagers to take centre stage by dominating in high-quality 800m fields. In the process, Max Burgin lowered the European Junior Record and Keely Hodgkinson broke the British U20 Record set when she was just a few weeks old.

It wasn’t all sunshine as, in their 10000m debuts, Jess Judd and Amy Eloise Markovc narrowly missed the Tokyo standard by less than one second.

The European Team Championships provided a number of athletes with the chance to represent their country for the first time whilst, at home, running clubs, the British Milers Club and plenty of others were providing athletes of all abilities with racing opportunities.

Whilst May was focused on running the times, June saw the spots to be called an Olympian up for grabs at the British Championships.

First up, 10000m. Away from its usual home in Highgate, and once again combined with the European Cup, Birmingham witnessed a hugely exciting race, particularly over the final laps, where Eilish McColgan and Jess Judd confirmed their Olympic places, the latter producing a 66 second last lap in the race of her life to achieve the seemingly-impossible Olympic standard.

In securing his Tokyo spot as British Champion, Marc Scott added being the first Brit to beat Mo Farah over 25 laps to his CV.

Fast forward three weeks to the British Championships in Manchester. Elation for some, heartbreak for others. There is so much I could write, but in short it was a pleasure to witness the dreams of athletes I have followed for many years realised in person. A first British title for Josh Kerr in an Edinburgh 1-2 with Jake Wightman was followed by the tactically astute Keely Hodgkinson passing Jemma Reekie and Laura Muir in the final quarter with laps of 62.1 and 57.5.

Then Jess Judd booked a second event in Tokyo by retaining her 5000m title, and the fastest British Championship 800m in 31 years for Elliot Giles in a photo finish with Oliver Dustin and Dan Rowden. It would be remis to not mention Mo Farah who, whilst not qualifying for Tokyo, ended his track career on a winning note and with a standing ovation.

Elsewhere, Sifan Hassan broke the 10,000m World Record in Hengelo, her celebration short lived as Letesenbet Gidey improved it by five seconds just two days later, on the same track. Scarily, Gidey’s 29:01.03 is faster than four of Emil Zatopek’s WRs for the distance.

Finally, in news that made plenty of people smile, Parkrun was cleared to return!

Keep your eyes peeled for the next six months of review coming shortly.