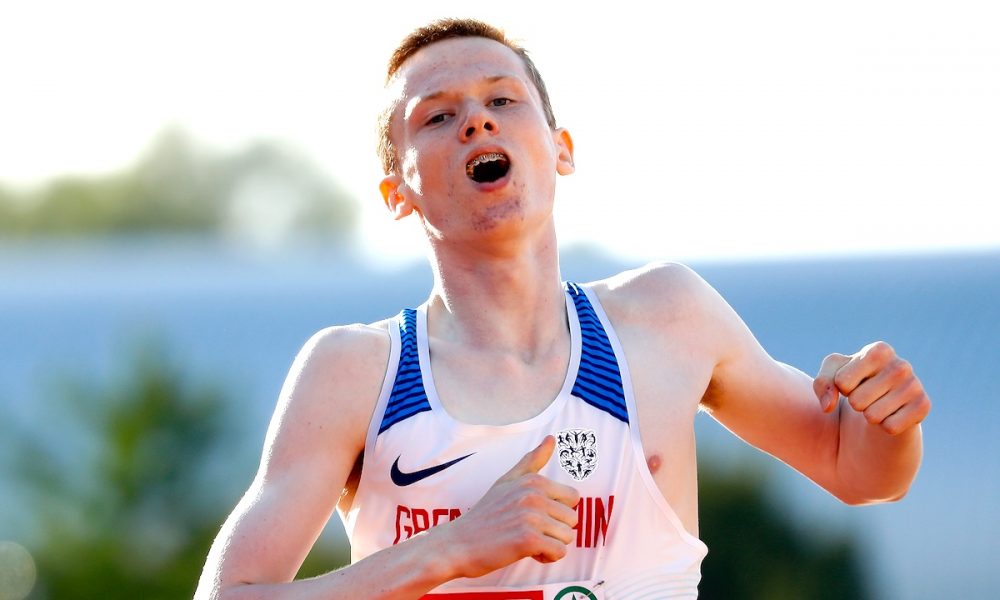 Max Burgin delivered another fabulous display of front running as he stormed to the win in the boys 800m final on the closing day (July 8) at the European U18 Championships in Gyor, Hungary.

The 16 year-old opened up a gap in the early stages of two-lap race and victory was never in doubt as he led from the start to finish before crossing the line in a personal best time of 1:47.36. It was also a championship record and world U18 lead for Burgin as he further lowered his European age 16 800m record.

“It’s unbelievable – it’s a PB as well so it was the perfect race really, everything I could have hoped for,” said a delighted Burgin. “I didn’t know I had that time in me but now that I do, hopefully in a time trial race I can go even faster. We’ll have to see but I’m really pleased with the result. It is a cliché but it is a dream come true.

“It was the safest thing for me [to front run the race]. I just ran my absolute hardest. I left everything on the track and fortunately that was enough. I think I saw the splits at 500m but that’s about all I can remember. I wanted to go through in around 52 / 53 seconds, that was going to be perfect for me.”

One of the best front running displays you will see all season!

Max Burgin, 16, took it out hard from the gun and won it from the front, crossing the finish-line in the 800m in a lifetime best and championship record of 1:47.36. pic.twitter.com/Uk0KC1KX6D

Burgin came through his heats comfortably on Friday, before he booked his place in today’s final with an impressive semi-final performance in 1:52.37.

The Halifax youngster added: “In the heats and semi-finals, it gave me confidence that I could I could do a good time all by myself. During the race, I didn’t really get tight and didn’t blow up or anything so my legs held up well after the rounds.

“The hardest thing over the three days has been hiding my nerves. Controlling them seems to be making me run better. It’s a key part of my preparation for my races, as it should be for any athlete.

Following on from Keely Hodgkinson’s gold in the 800m and victories by Thomas Keen, Kane Elliot, Sam Bennett and Dominic Ogbechie, Burgin’s gold brings Great Britain’s haul to a superb six gold medals at the European U18 Championships.

In the girls 1500m final, Emily Willams led the charge after Ireland’s runaway winner Sarah Healy and her efforts were rewarded with a superb silver medal.

Willams clocked 4:22.11 and said afterwards: “It sounds unbelievable [to be a European U18 silver medallist]. I‘ve mixed between the 1500m and 800m all season, and I think my speed really helped me in the final part of the race.

“I was nervous – but I could see that three of us had moved away from the others. The pace picked up with 200m to go and I knew I had to go with it because I really wanted a medal. My coach and my mum and dad are here to watch me and I’m so pleased they could see me win a medal. It’s great to have their support here, and I want to thank them for everything and making this happen.”

The British team won nine medals in total at the championships to top the medal table for a second consecutive time.