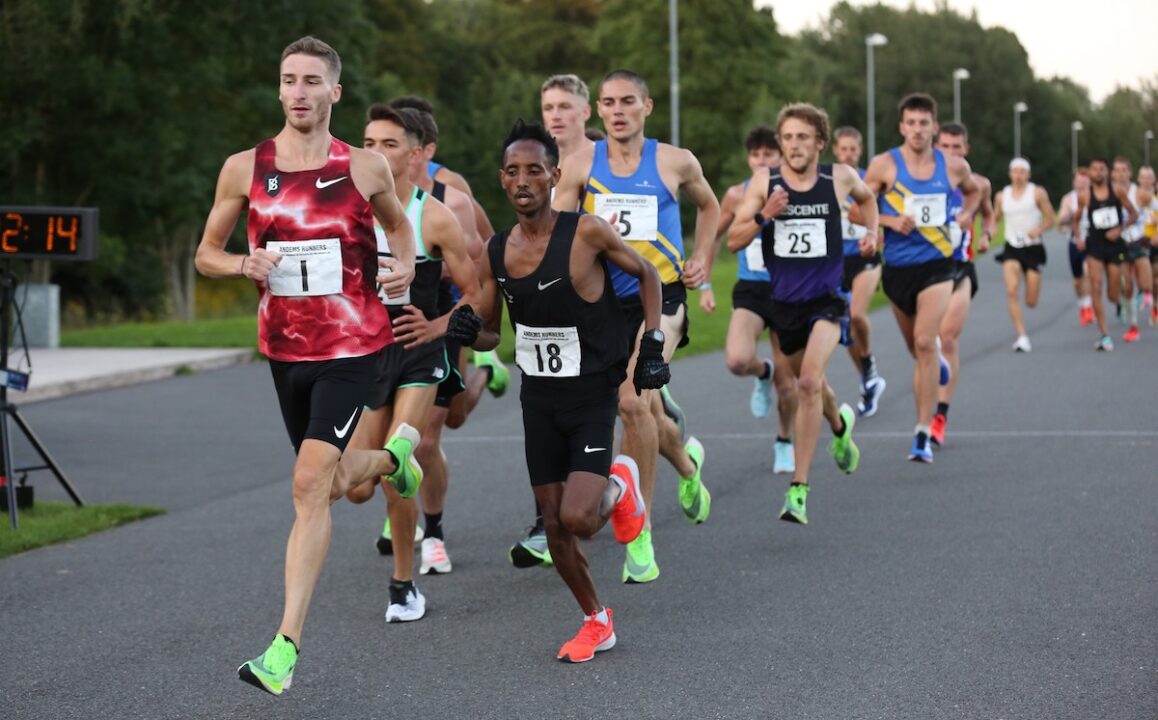 Ahmed, Scott and Yee will be back in action this Friday. Credit: Pete Brown Photography

At the Results Base MK5km PB Special 28 waves of 10 runners take to the roads and paths around Willen lake in Milton Keynes. With three women’s and three men’s elite waves there is plenty of action which you can follow live at the RunningLive Facebook page.

After her stunning PB of 15:45 at the Podium 5km Bronwen Owen will be the athlete to chase in the UK Endurance Conference Women’s Elite Wave A. In March Owen took over a minute off her 10km PB to finish 3rd at Trafford 10km in 33:30.

Ribble Valley’s Eleanor Bolton was another athlete taking a big post lockdown step forward at Podium where she clocked 15:56, following that up with a new 1500m PB of 4:26.86 at the BMC in Stetford just three days later.

Steph: We ok to long run early tomorrow?? Me: • V v happy to be racing again🤩🥳🙌🏻finalllly sub16 after like 4yrs of failed attempts lol. Thanks to @podium_5k for organising!! • 📸 1,2,4 @thatsagoodoneofme

Barlow and McCall feature in ‘B’ Wave

GB Marathon runner Tracy Barlow features in the On Track Physio Elite Wave B. Barlow set a new half marathon PB of 72:12 at Barcelona Half just before lockdown and has a 5km best of 16:31. She is joined by the likes of Steph McCall of Herne Hill (PB – 16:37) and Lauren Cooper (PB 16:45).

The quality of the racing is fantastic and encompasses a third women’s elite wave sponsored by Loughborough Finance for Sport including the likes of Jen Granger, Emily Ruane and Alice Ritchie. Across the 28 waves there are women targeting sub 18 minutes with the depth illustrated by the British Trail Running Champion racing in wave T!

Ahmed, Gray and Sheldon in Men’s Elite A Wave

After a stunning 13:42 at Podium 5km Omar Ahmed is the man to watch in the Fast Running Mens Elite A Wave. Ahmed is a man who went into lockdown in fine form having set a new 10km PB of 28:39 at Telford at the end of last year.

He is joined by Jack Gray who shook off some rust at Podium 5km with 14:08 with plenty of marathon training miles in the legs. With a best of 13:47 he is likely to figure alongside Grant Sheldon. The triathlete took a huge chunk off his PB when clocking 13:51 at Podium 5km.

You have to scroll back through eight waves of men before you find target times slower of 15 minutes+ and the New Levels Coaching Elite B Wave sees the likes of Jordan Rowe (track PB – 14:02), Scottish u/20 National XC Champion Freddie Carcas and GB ultra runner and 2:16 marathon man Paul Martelletti competing.

Conditions look tough with some strong winds expected but that will not dampen the excitement surrounding such high quality racing on the roads post lockdown.

With stacked races from 800m to 3000m the Bromley Twilight Invitational has been put together by Mark Hookway and will be live streamed by Lloyd Kempson on the Team Project Run Instagram page.

Catch the live stream from 6:00pm on the TEAM PROJECT RUN Instagram📸 pic.twitter.com/ndLFcWrYsW

They are joined by the likes of BUCS indoor champion Louise Shanahan, 2:02.02 athlete Ellie Baker and Khahisa Mhlanga who ran a huge PB of 2:02.23 at Lee Valley last week. The women’s 800m is set to be two of the most competitive races of the night.

So stay in, pull up a couple of browser windows and enjoy the buzz of real world racing again!