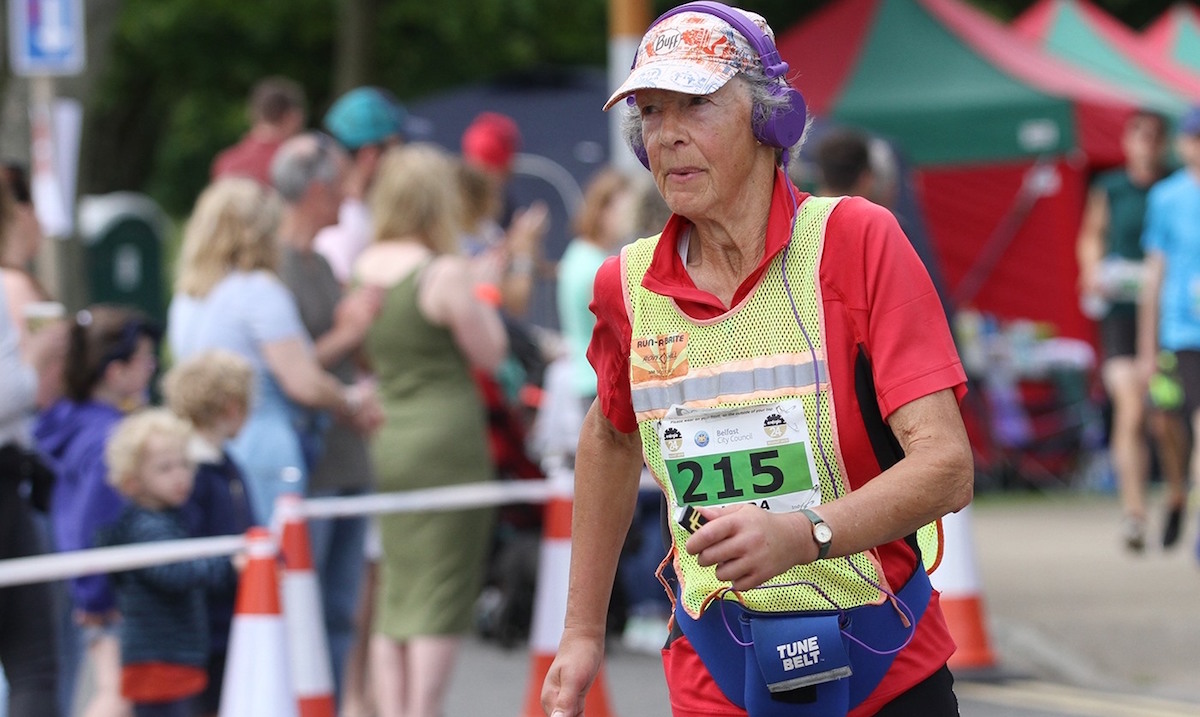 In the tenth and final Energia 24hr race in Belfast, the most experienced runners excel over the ultra distance.

One of Great Britain’s most decorated and experienced ultra distance athletes , 70-year-old  Sandra Brown, stole the show at the last ever Energia 24-hr race in Victoria Park in Belfast at the week-end setting two new world records.

Firstly Brown, from Dorset, went through the 100 mile mark in 21hrs, 15 mins and 33 seconds to crack that record – it was the 204th time she had completed that distance – in itself a record; and then she went on to beat Australian Shirley Young’s long standing world age-group record for the 24 hours.

She, in fact, went nearly four miles further that the Australian covering 113 miles(182 kms) and she didn’t run once. She walked all the way. And, if all that wasn’t remarkable enough her ‘walking’ strategy was good enough for 24th place overall in a field of some 225 ultra runners.

“Sandra Brown is one of the greatest athletes that you’ve never heard of,” says Fast Running’s Robbie Britton. “Along with her husband Richard, the pair have been a part of British ultra running and long distance walking for decades. It is not exaggerating to say they have shaped the current British 24hr running scene with their performances, influence and love of the sport.”

“The sheer number of 100 mile races that Sandra has completed, over 200, is absolutely stunning. The records that come along with this even more so,” continued the GB 24hr runner. “Both Sandra and Richard have been an inspiration for a whole host of our current GB ultra runners.”

Brown’s record meant that four world records had been set at the race in Victoria Park in the last three years, which has earned Energia24 a place in the Guinness Book of Records. A battle for victory

Elsewhere, there was an absorbing battle for the podium places in the men’s race with three Cork men involved.

Padraig Mullins, who had flown in from Boston for the race and was looking to impress the Irish selectors ahead of the World Champs in France in October, was the long time leader before defending champion Aidan Hogan took over building a substantial lead.

However, dramatically, he began to tire as his exhausted body developed an alarming ‘list’ and Eoin Keith, who had considered quitting around 1am in the morning, reeled him in to win his fourth National title (146 miles/235km) with Hogan hanging on for second(142 miles/228km) and Mullins third (139 miles/223 kms).

The women’s race was equally dramatic with a similar pattern. Norway’s Therese Falk was the long time leader before Finland’s Paula Wright came strongly through to take the win (136 miles/218km) from Falk(135 miles/216km) with Newtownabbey’s Louise Smart in third( 132 miles/213km).

Wright, who lives in Tipperary, also qualified through her Newport AC club to win the Irish title from the defending champion Smart with Rosslare’s Lorraine McMahon in third (130 miles/210km).

That meant there were four women in the top 10 showing again that they can match the men in the sport of ultra running.

Stronger as a team

The Team Relay record of  193 miles (310km) had been set by Dublin Bay Running club back on the Mary Peters’ track in 2015. Then it had to be a mixed team, but a rule change this year brought men’s teams into the equation for the first time and the Willowfield quartet of Tim Brownlie, David Proctor, Gary Morrow and Neil Weir proceeded to demolish it.

In fact they added another 15 miles winning  with 208 miles/335kms – a record that one suspects will last for some considerable time.

It was the biggest field assembled outside of the World Championships two years ago in Belfast and of the 225 who went to the line 76 went passed 100 miles- and 12 passed 200km showing the continued growing strength of ultra running in Ireland and beyond.