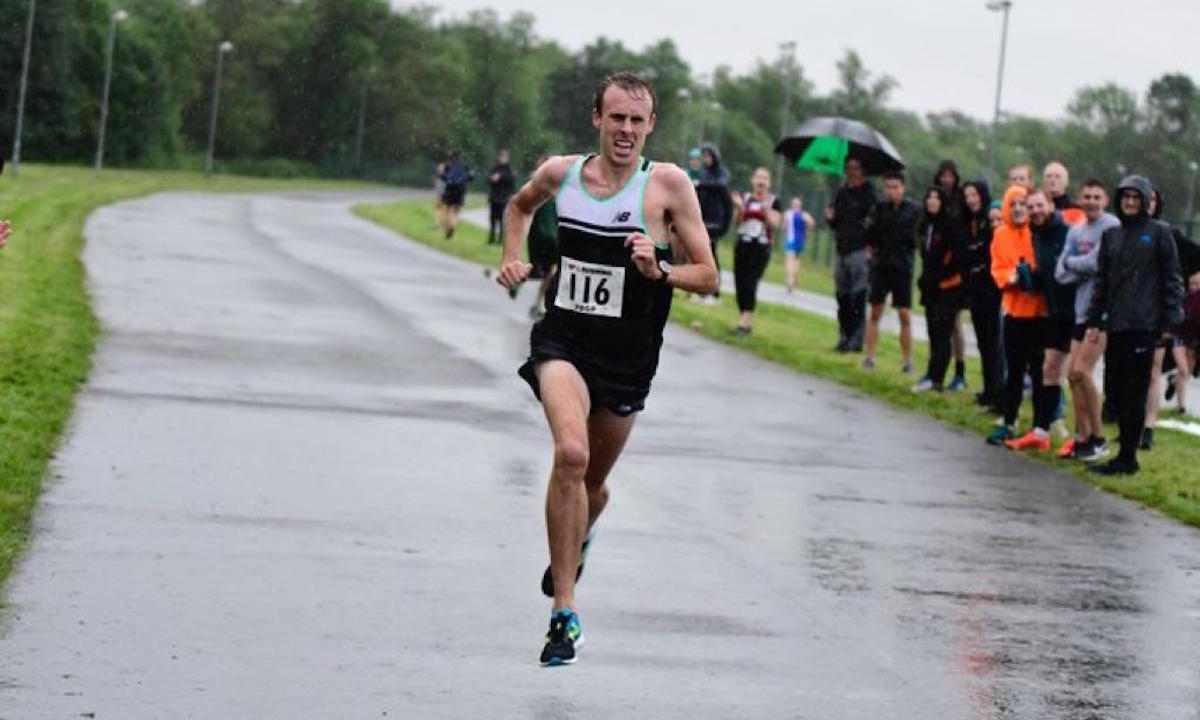 Kaitlyn Sheppard shows us how to finish a race, Ben Connor and Danielle Hodgkinson win confidently in Sunderland and there’s plenty of other racing around the UK

The England U23/20 Champs took place in Bedford this weekend in mixed conditions over the two days. Athletes were competing for places at the European U20 and U23 Championships in Tallinn in July. The final of the U20 3000m took place on Saturday, with the women’s race providing an exciting watch.

U17 Fleur Todd-Warnoth (Blackheath & Bromley) was a few strides in the lead with a couple of laps to go. Kaitlyn Sheppard (Cheltenham & County) looked like she was brewing a fast finish from about 200m out but had perhaps left it too late. In a moment of brilliant tactics and pace injection she snuck through on the inside just before the line to take the gold medal with an eight second personal best of 9:42.45.  Todd-Warnoth’s time was 9:42.73 and Lauren McNeil (U20) of Mansfield Harriers took the bronze medal in 9:48.97.

Let’s take a second to remind ourselves of that incredible battle between Kaitlyn Sheppard and Fleur Todd-Warmoth in the U20 3000m Final earlier today. 😳
Congrats to Kaitlyn on the big PB of a 9.42. 👏
Don’t want to miss the rest of today’s events? Watch here 👇#EAChamps

There are more results to come later today and England Athletics report swift finishes in all the races, so we expect some fast times in the finals as more results come through.

Plenty of quality on show in Sunderland

Events of the North  hosted the Sunderland City Races which were also spread over two days. On Saturday evening the 5k route saw tough windy conditions windy and a course with plenty of tight turns  but that didn’t stop Danielle Hodgkinson (Wallsend Harriers & AC) finishing seventh overall and leading the women home in a rapid 16:30 PB – only six seconds off her PB. Behind her were Lydia Turner (Birtley AC) in 18:02 and Aly Dixon (Sunderland Strollers) in 18:03. Aly was due to be back out in the half marathon on the Sunday but as lead bike for the women’s race. It capped off a good week for Hodgkinson who was also crown Army 800m and 1500m champion at the Army Individual & Inter Corps Champs on Wednesday. From one GB Olympic Marathoner who has hung up her competitive trainers, to those who who are on their way to their first Olympic appearance –  Ben Connor was set to get some good turnover in the legs by competing in the 10k and Jess Piasecki was due to take part in the half marathon.

Connor came away with a solid, comfortable looking 30:03 and first place. He was followed by Graham Rush (Leeds City) in 30:52 and Stephen Jackson (Sunderland) in 31:17. Lees City’s Claire Duck ran 34:36 to beat clubmate Georgia Malir who finished in 34:52 and Georgina Weston (Rotherham Harriers) who was third in 37:35

Now, let’s take a wander back through the week and check out the rest of the results from around the UK.

On Monday in Bebbington the  Wirral AC Mini Meet had a small field of six competitors for its 5000m race but five of them ran PB’s with Thomas Dempsey of Kirkby Milers being the fastest in 16:11.0.

At the Southern Counties Vets AC London Division Closed Meeting  in Kingston Michelle Carter PB’d for the win over 3000m, running 11:09.2 in an all male race. Richard McDowdell won that men’s race in a storming PB of 8:59.3 – over a second clear of Marco Gazelloni.

On Wednesday the North East Counties AA 10000m Championships in Shildon saw Gregory Jayasuriya take regional victory for his club Middlesborough & Cleveland thanks to his 32:46.3 run. Gemma Harcombe-Moore PB’d with 41:56 to take the women’s crown for New Marske Harriers. Kettering Open Meeting  had plenty of young talent out on the track. In their 3000m race Alice Bates (U17, Kettering) won in 10:00.40 and Alex Adams (U17, Stratford Upon Avon) in 9:13.12.

Nothing much was happening in the middle-distance / distance world on Thursday but on Friday The Paul Murray Grand Prix  in Eskra was a chance for U15 Eimar McCarroll (Omagh) to flex her 5k pace and run a brilliant 17:51 to place fifteenth overall and fastest female. Niamh Heaney (U20, Omagh) was second in 18:39 and Grainne O’Hagan third in 19:10(V40, Knockmanny Runners). Gavin Corey (Strive Racing) clocked 15:13 for the overall win, ahead of Eoin Mullan (Omagh) in 15:21 and Andrew Newell (Sperrin) in 16:32.

Midweek means Chase The Sun races and Coventry is one of the newest in the Run Through stable. Luke Morgan (Kenilworth Runners) and Katherine Robertson (Spa Striders RC) were the 10k winners in 34:17 and 42:08 respectively. The 5k had a couple of standout performances from Karl Welborn (B’ham AC & Tri) who won in 15:54 and Kelly Butler who was over two minutes clear with her 18:10 victory.

In Clapham the 10k top spots went to Catherine Airey (Highgate) in 40:38 and Dave Edwards in 36:47. Over 5k it was the Fulham stripes of Cat Simpson that crossed the line first for the women in 20:22 and Horsham Blue Star Harriers’ Luke Tricas bagged the men’s best in 16:55.

Jacob Cann (31:09) and Kirsty Longley (35:22) claimed the wins and both claimed course records at Lancaster Father’s Day 10km. On a busy week of racing in the North West the ever popular Sale Sizzler 5km took place on Thursday evening, and Longley was also in action there, claiming 2nd in 17:17, with Lauren Heyes and impressive winner in 16:25. Elizabeth Renondeau was 3rd just behind Longley in 17:18 as two of the UK’s best V40 athletes went head to head. Andrew Heyes was the first man in 14:09 with Jonny Mellor 2nd in 14:26 with Andrew Davies 3rd in 14:29 in a high quality field.

Sunday saw not only the above mentioned Salford races but also plenty of other racing opportunities. At Colshaw Hall the 10k  had a good field which was led home but Tom Bains in 31:48, just one second ahead of Jamie Arnold and a little more clear from Cam Muir (32:02). Claire Clancy ran 36:41 beating Donna Sherwin (37:02) and Kelly Butler (37:38). At the Eastbourne 10k  it was Patrick Marsden who won in 35:18 for Polegate Plodders (not very plodd-y!) and  Julie Briggs in 37:53 for Arena 80 AC.

The Run Through Wimbledon Common Half Marathon and multiple Southern Athletics League  races took place on Sunday but results are yet to be announced. They will be available later  on Power of 10.

On the trails this weekend, Race to The King covered 53 miles finishing at Winchester Cathedral. David Gaskell was first to the steps in 8:01.34 and Louisa Robbins ran a brilliant race to finish sixth overall and first lady in 8:11.54.

Finally, a quick catchup from last week – the Think Big Half Marathon in Launceston, Aus didn’t quite make our roundup but we couldn’t let it pass unmentione. Nick Earl (City of Norwich) placed sixth in 68:29 and Calli Thackery (Rotherham) ran a fantastic PB of 72:16.