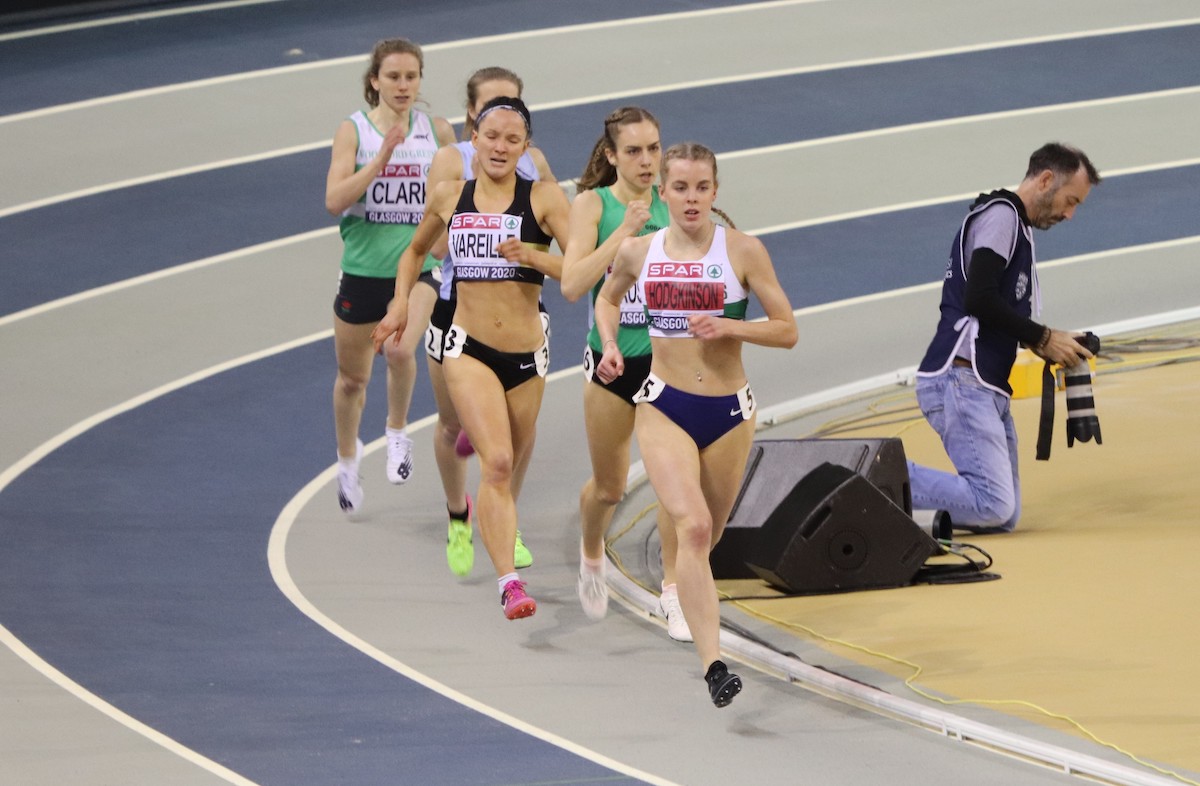 By the time the European Indoor Championships kick off on Thursday evening, it will have been 515 days since a major track and field championships took place. As a big athletics fan, I have waited a long time to say this – it’s Championships week!

Since then there’s been a postponed Olympics, cancelled European Championships, and twice-postponed World Indoor Championships. In a time of travel restrictions and closed borders, it feels an almost-impossible feat that the 36th edition of the European Indoors is going ahead as planned in Toruń, Poland between Thursday and Sunday.

No spectators and a significantly reduced media presence means this is the first major championships I will be watching from home since the Rio Olympics. But, in honest, I am just happy that extensive planning and COVID protocols have allowed it to go ahead. It’s not just going ahead, a record 733 athletes are registered to compete from 47 countries. Great Britain (for non-UK held editions) and Ireland are sending their biggest ever teams. Impressive, right?

It is also a special moment for a number of British athletes who are gaining their first British vest, making their senior debut or experiencing their first time racing for their country on the track. This alone makes it a worthwhile watch.

It has the potential to be a brilliant four days. To whet your appetite, I’ve run through what to look out for in the middle-distance races. To paraphrase Aerosmith, you don’t want to miss a thing. All race times quoted are for the UK and previews based on entry lists as of Tuesday afternoon.

Five men have entered the top-20 of the European All Time list this year. To put that into context, only four men did the same between 2004 and 2020. Three of those men – Jamie Webb, Andreas Kramer (Sweden) and Mariano Garcia (Spain) will be in Torun, with the other two (Elliot Giles and Charlie Grice) focusing on the outdoor season.

They are not the only noteworthy athletes competing – 18 men on the entry list have run sub-1:47 this year, and the previous edition’s podium return (Spain’s Alvaro De Arriba, Jamie and Ireland’s Mark English), as does 2015 bronze medalist Dutchman Thijmen Kupers.

However, for me at least, the standout athlete is Adam Kszscot. Until writing this, I hadn’t fully appreciated his track record – Adam is reigning World Indoor Champion and is undefeated at every European Indoor and Outdoor Champs he’s competed for 10 years, with three outdoor (2016, 2016, 2018) and three indoor (2011, 2013, 2017) titles.

His season best (1:45.22) is third fastest of the field this year, and his fastest indoors in seven years. With his Champs record and being on home turf, you’d be brave to bet against him. I am not that brave.

I mentioned earlier that this Championships was an opportunity for athletes to compete on the “big” stage for the first time. The 800m exemplifies that, with Keely Hodgkinson, Issy Boffey and Ellie Baker all making their British senior debuts. Not only that, there is a serious chance for at least one to take home a medal. Keely is over a second faster this year than any of the other 40 entrants with her 1:59.03 which, until last weekend, was the (yet-to-be-ratified) World U20 Record.

As I wrote at the time, Issy’s 2:02.45 for third at the Boston edition of the World Indoor Tour was a personal highlight of the meeting and I’m excited to see what she will do this weekend. They will have strong competition from across the Irish Sea, though – of those on the entry lists, three of the top seven fastest in 2021 are in Ireland’s team. Such is the strength of Irish 800m running this year that 2:01.67 was not fast enough to book a spot in Torun.

Síofra Cléirigh Büttner and Nadia Power have traded the Irish National Record this year, both running sub-2:01. Nadia has looked at home on the World Indoor Tour this season, whilst Síofra has experience at the outdoor World and European Championships. They are joined by Georgie Hartigan after her equally impressive 2:01.48 in Dublin a fortnight ago.

Competition is likely to come from home-stars Joanna Jowzik and Angelika Cichocka, alongside Norway’s Hedda Hynne. Interestingly, only one of the finalists from the previous edition (Belgium’s Renee Eykens) is in the field. I am genuinely excited for this race! If you were to ask me to sum up the 1500m in three words, I would say “Jakob versus Marcin”. I am of course referring to Marcin Lewandowski and Jakob Ingebrigtsen. A battle of the ages, literally – Jakob was only nine when Marcin won his first European Championships. The Norwegian tends to get the overarching share of plaudits from pundits, but I wouldn’t describe him as the out-and-out favourite just yet. I won’t dwell on either’s achievements, but it’s hard to not mention a few stand out moments.

Jakob famously won a 1500m-5000m double at the last outdoor Europeans, is reigning European Indoor Champion over 3,000m and has won the Junior Race at the last four European XC Championships. Plus, he went second on the 1500m all-time list with a staggering 3:31.80 in Lievin last month.

Marcin’s career is equally as decorated, his resume including three-time European Indoor Champion (twice over 1500m and once over 800m), bronze medallist at the 2019 World Championships, and silver at the 2018 World Indoor Championships. He too has run a PB and NR (3:35.71) this season. Marcin has the upper hand in their head-to-heads (2 to 1), including in this race in 2019, and again on home turf I’d not bet against him.

If you assume the first two spots on the podium are decided, the battle for the remaining is more open, with GB’s Neil Gourley next up of the European lists after his 3:35.79 PB in Toruń last month. Spain’s Jesus Gomez, who took bronze behind Marcin and Jacob, Poland’s Michael Rozmys, Czech Filip Sasinek (2017 bronze) and Jakob’s older brother Filip Ingebrigtsen also feature.

It is also great to see Cardiff Met’s Piers Copeland and Brighton Phoenix’s Archie Davis getting their first senior British vests. His clubmate George Mills is entered as a non-travelling reserve.

BACK TO TORUŃ 🇵🇱

Congratulations, as well, to everyone selected 👏 Let’s do this! pic.twitter.com/Xoe4hoQxrA

In the absence of both all members of the 2019 podium and the two fastest women this year, the 1500m is another that is hard to call. Belgian Elise Vanderelst leads on time, with 4:05.71 in Lievin last month, closely followed by Hanna Klein (Germany) and Spanish duo Esther Guerrero and Marta Perez. Elise is the youngest of the four and lacks senior-level experience compared to the others (although did take silver at the last European U23 Championships behind Jemma Reekie).

Steeplechaser Gesa Krause certainly isn’t lacking in experience, with two World and three European Championships medals. However, she hasn’t raced a 1500m at a Championships since 2015 and her four 1500ms this year have delivered mixed results. British Indoor Champion Holly Archer will be making her Great Britain debut, thanks in part to an excellent 4:10.03 in Manchester last month, an outright PB, and her win at the trials event.

Friday will also be the first time Katie Snowden dons a senior British vest, having represented England over the same distance at the 2018 Commonwealth Games. They go in sixth and eighth fastest this year in the field, and so anything could happen. Ciara Mageaan has unfortunately withdrawn from the Irish squad this week.

If you were to ask me to sum up the 3000m in three words, I would say “Jakob versus Marcin”. Wait, I have a sense of déjà vu. No, in fact, both Marcin Lewandowski and Jakob Ingebrigtsen are down for the difficult-but-not impossible double.

If Marcin wins, he’ll be the first athlete to have European Indoor titles over 800m, 1500m and 3000m. If Jakob wins, he’ll retain his title from Glasgow two years ago. Both could happen. Tactics aside, this is the hardest of the men’s races to call on paper. Six men have run sub-7:45 this year, headed up by Spain’s Mohamed Katir, Frenchman Jimmy Gressier (reigning 5,000m and 10,000m European U23 Champion, although you definitely know him better for his failed knee slide celebration at the 2018 European XC Championships) and Scot Andrew Butchart.

Andreas Almgren (Sweden), Mike Foppen (Netherlands) and Isaac Kimeli (Belgium) have also run sub-7:45 this season and could feature, as could 2017 European Indoor Champion Adel Mechaal. After a withdrawal from Marc Scott, who has decided to stay in the USA, Leeds City’s Phil Sesemann gets his first British vest on the track. He’s noted it as a career highlight, and I am chuffed for him, especially given his focus for this year at one point was the marathon. He’ll be joined by AFD’s Jack Rowe, also making his GB track debut.

Been going at this a few years now so absolutely delighted to be called up for my first track GB vest.

I love so many aspects of this sport but it’s tough to top moments like this.

I cannot thank all those who have supported me along the way enough. https://t.co/Qn9USoMXQu pic.twitter.com/yFrl29WEH0

With the two fastest Europeans of 2021 (Sifan Hassan and Melissa Courtney-Bryant) and reigning champion Laura Muir not competing, the women’s 3000m is another with a somewhat open field. On paper and based on times alone (via the World Athletics website), the charge would be led by Slovenia’s Maruša Mišmaš-Zrimšek (8:48.82), Maureen Koster of the Netherlands (8:49.63) and our own Verity Ockenden (8:51.63), with times run in Karlsruhe, Lievin and Manchester respectively.

Of course, times rarely count for much in Championship races, but it would be fantastic to see Verity feature in what is her first major Champs. She will be joined by two athletes earning their first senior British vests on the track – Amy Eloise Markovc and Amelia Quirk. Based in the USA, Amy-Eloise ran a 8:54.1 split en route to breaking the British Record over two miles in Boston last month, whilst, if I am not mistaken, this will be Amelia’s second ever indoor track race after the trials last month. Quite a debut! Rosie Clarke is named as a non-travelling reserve.

Dutchwoman Jip Vastenburg, who is part of Steve Vernon’s Team New Balance Manchester squad, has run well in Karlsruhe and Manchester this year and could feature.
According to the entry lists, Israel’s Selamawit Bayoulgn and Romania’s Claudia Bobocea (who is entered for the 800m, 1500m and 3000m!) have both run sub-8:50 this year, but these times do not feature on the World Athletics lists for 2021. I guess we will find out on Friday.

All sessions will be shown live on the BBC.