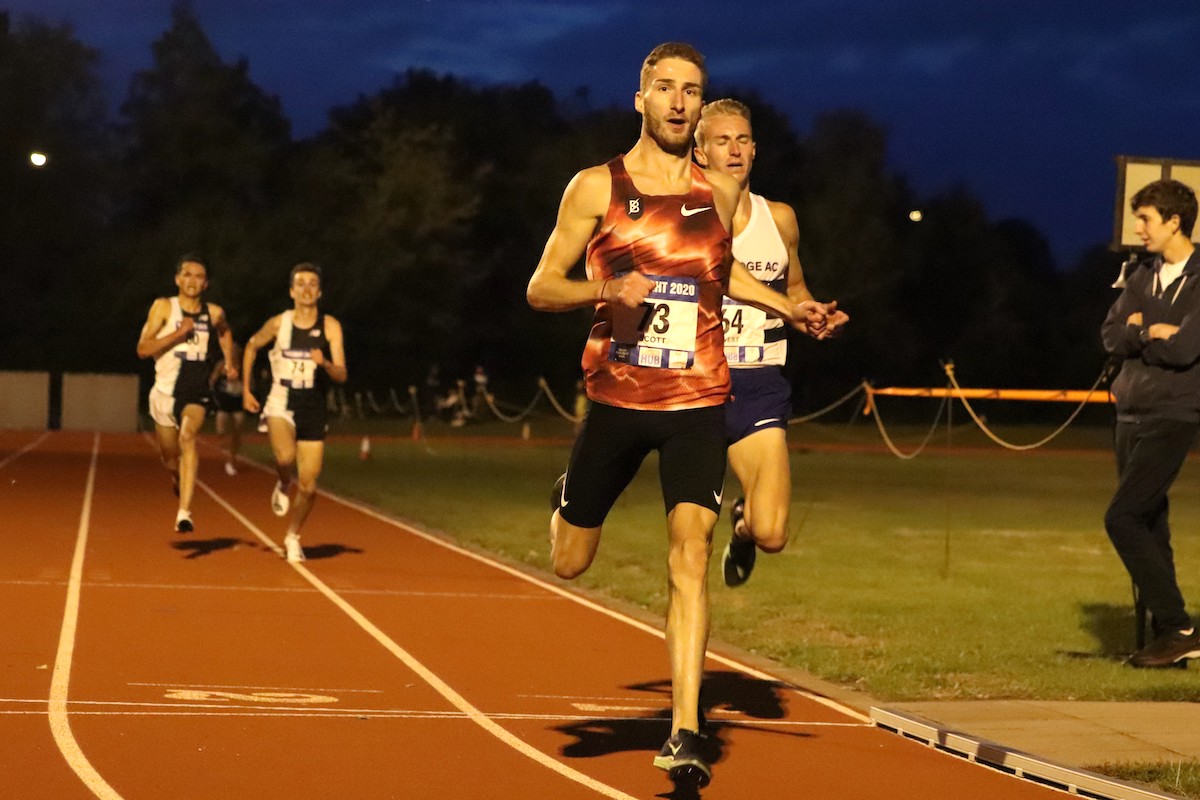 Athletes chase key times this weekend a McColgan and Scott run PBs and olympic standards in California while Ockenden and Rowe set the bar at the European Indoor Trials in Manchester. Gill Bland brings you the action.

Eilish McColgan and Marc Scott were in action at The TEN in California last night. The race was the first of its kind to use a prize pot model where fans contribute, with 100% of that fan-funding split between the winners. Both races were loaded predominantly with Bowerman Track Club runners being paced for the US Trails and Olympic Qualifying Times by teammates – Vanessa Fraser and Courtney Frierichs for the women and Evan Jager and Sean McGorty for the men.

After some perfect pacing to hit their target (31:25 OQT / 32:25 US Trials QT) in the early stages the women looked strong and comfortable, with only Gwen Jorgensen noticeably dropping off pace. As one of only two non-BTC athletes in the race and a last minute flight from Dubai to LA.

McColgan was always going to have a slight disadvantage anyway and especially if team tactics came into play. So, it was a brave but sensible move that led her to duke it out at the front for a good portion of the race with Emily Infeld before 10,000m debutant Elise Cranny and experienced racer Karissa Schweizer stepped up to take it in turns to take the lead.

It looked like the team approach was certainly being utilised, but someone had to win and the pair took it all the way to the finishing straight, both logging a 65 second final lap as McColgan held strong behind them to finish third 30:58.94 taking 18 seconds off her previous best, place second on the Scottish all-time list and fifth on the British rankings, right behind her mum’s 30:57.07 marker.

It was Cranny who snuck a stunning win in 30:47.42, a whisker ahead of Schweizer’s 30:47.99. To underline the quality of the race – the top five all registered the Olympic requirement with Cranny and Schweizer taking third and fourth on the US rankings behind their coach Shalane Flanagan.

Gutted to be just 1s outside my mum’s PB & Scottish Record but can’t complain with a big PB & sub 31!

Definitely worth the last minute flight to LA. 😁

Stunning Scott continues his rise to the very top

After the excitement of the women’s race it was time for the men to step up and see if they could hit their 27:28 / 28:00 goal. There was only one non-BTC racer this time, Ben True, so it was up to the Nike squad to get the job done. Marc Scott stated his intentions straight off, taking the armchair spot as the pacers flew them round their first lap in 66 seconds.

The laps clicked off around the 64/65 mark and while a couple of athletes dropped out, Scott held strong all the way instantly trying to put a gap in the field as soon as the pacers dropped off. Grant Fisher took the lead with a couple of laps to go but 600m out Scott fought back. The pair dropped a 61 second penultimate lap with Soctt driving all the way home to take a 46 second PB and the win in a stunning 27:10.41.

That puts him second on the British all-time list behind Mo Farah whilst Fisher moved up to fifth on his country’s rankings to sit just in front of Meb Keflezighi. All five finishers hit the Olympic and US standards. Woody Kincaid was third in 27:12.78.

You can watch the whole race below, and it is well worth a watch;

The last of the American Track League meets is due to take place in Arkansas today with GB’s Adele Tracey and Ireland’s Siofra Cleirigh Buttner due to race to 800m. Results will be available here.

It wasn’t just in California that the brits were showing our friends across the pond how to race. In North Carolina at the Camel City Elite race New Balance athlete Hannah Seagrave stormed around the aptly named ‘JDL Fast Track’ to win her first 800m race of the season in 2:04.70.

Pleased to take the win today in my first 800 of the season! Thanks @jdlfasttrack for putting on a great meet as always!

Back in the UK, qualifying times were on the minds of athletes in three separate venues around the country. While short sprints, hurdles (except women’s 60m) and field trials were being held in Lee Valley and Loughborough, Manchester hosted the 400m-3000m races for the British Athletics European Indoor Selection Trial Event.

Up to three athletes can be selected for each event and they must have run the qualifying times between 1st May 2020 and 21st Feb 2021. The selections will be announced this Monday, the 22nd Feb. There are a bunch of other criteria which you can read up on here if you want to try and second guess who will come out with a plane ticket to Poland.

The events faced fierce criticism on social media for the lack of live streaming despite British Athletics having cameras in place to collate a montage of clips and highlights. There was also dissatisfaction from some agents and athletes around other aspects of the organisation. Of course the lack of a crowd would not have helped but some of those competing or watching still noted the lack of music or other attempts to make improve the atmosphere.

Energy music building anticipation targeted music to support the pace of a race commentary to build feeling of big event regardless of empty hall athletes pens in hall not outside…bringing a feeling of crowd and involvement, basic showbiz knowledge @BritAthletics @dsstellar https://t.co/nGTE4UeSTG

In the 3,000m all of the top three hit the women’s indoor QT standard to send them to Toruń. Swansea’s Verity Ockenden only set her indoor PB of 8:51.63 at Sportcity last weekend, but 8:56.27 was enough to win her the race on the same track this time.

She commented on Instagram that she had a “four hour karaoke party for one on her drive home” – oh the glamour of the elite athlete life! Amelia Quirk (Bracknell AC) placed second, running a great debut indoor performance of 8:58.57 and Rosie Clarke (Epsom & Ewell) was third in 8:58.97. It was a real shame not to have the events streamed live and even the athletes commented on it.

I am VERY grateful to have raced today. So thank you @BritAthletics BUT
The lack of livestream & even online results is farcical in 2021. A stream would have meant infinitely more to our dedicated supporters than the montage below.
Next time livestream please 🙏 https://t.co/9VvrNLkhgU

These ladies join Melissa Courtney-Bryant and Amy-Eloise Markovc as those who have run under the nine minute mark on the indoor track so far this year. Aimee Pratt of Sale Harriers Manchester finished fourth in 9:03.89 – she’ll be back to chase the 4:13 standard in the 1500m on Sunday.

Philip Sesemann (Leeds City) was third in 7:57.22, though he also holds the qualifying time from his performance on the same track last weekend at the Bryggen Sports Invitational. Marc Scott, Mark Pearce and Tom Anderson have also hit the time this year. Butchart raced again in the 1500m.

“I feel like I have the speed and the strength and it’s all coming together when I want it to so I enjoyed it. It was good just to race and not worry about times, last week it was all about checking off the time and today was fun because it felt easier.”

Of course, we couldn’t round up this week without mentioning Elliot Giles and Jamie Webb’s performances at the World Indoor Tour, but that deserves its own article, so head over here to read up if you’re lagging behind on the news.

Brilliant Brits and Irish in Torun, To Run
Fight to the line Torun Euro Champs for Irish athletes