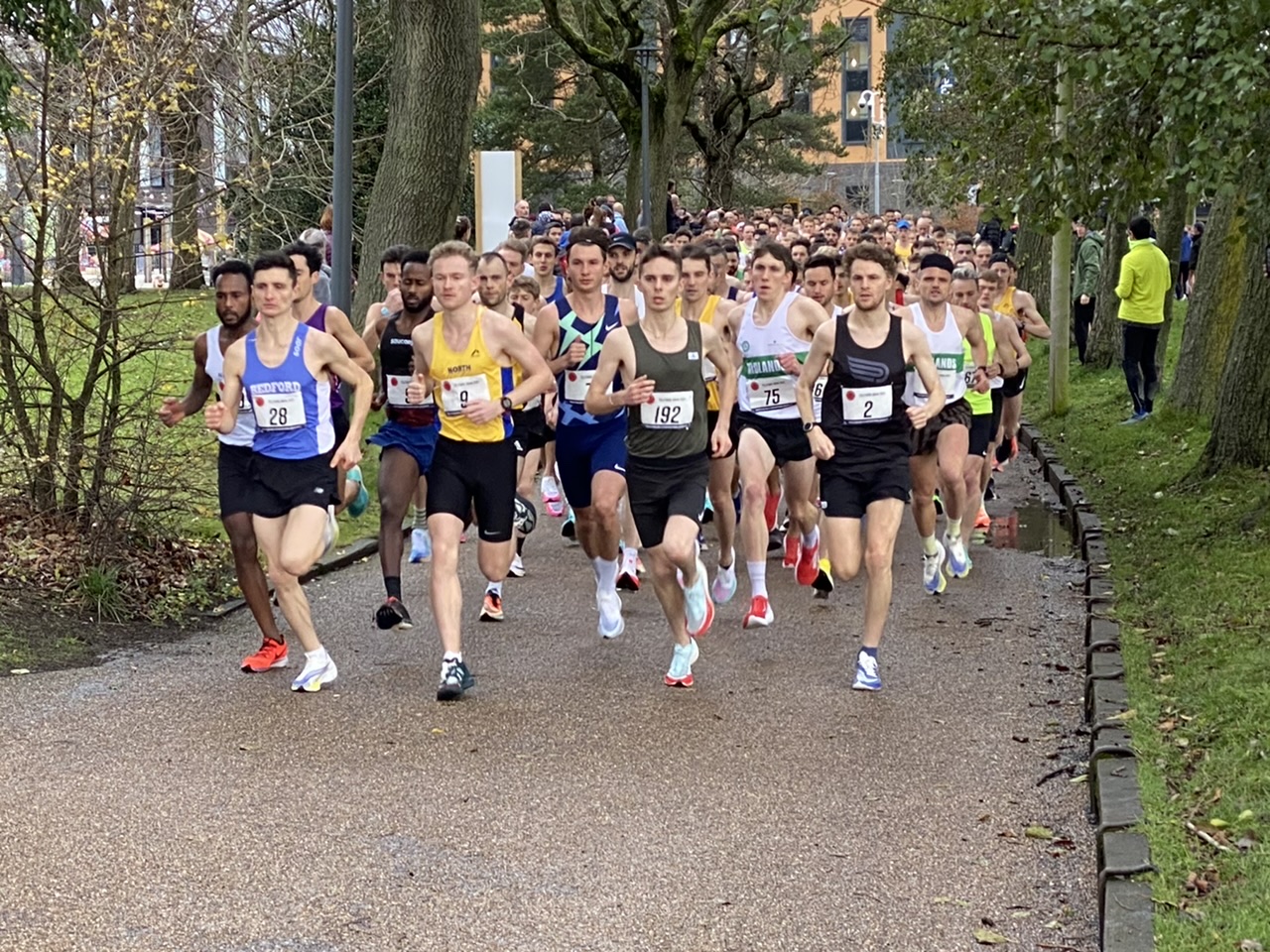 A very busy weekend saw most eyes focused on the European Cross Country Championships in Dublin, however there remains plenty of other racing action to bring you. Get ready for a speedy run through the races of the weekend.

After a year’s postponement due to the COVID pandemic, the European Cross Country Championships made a welcome return, with Dublin providing a fantastic atmosphere and some great races.

It was a hugely successful day of racing from a British perspective, with the 40-strong British team topping the medal table with five golds, including individual titles for Megan Keith (U20) and Charles Hicks (U23).

Megan Keith has had a fantastic 2021 and has dominated the her cross country races over recent weeks. The Inverness athlete found herself at the front of the pack early on and opened up a small lead from Germany’s Emma Heckel around halfway, but the pair continued to jostle for the lead entering the final circuit.

With just under half a lap to go, she made a decisive move that saw her pull away from the chasing pack to cross the line in 13:41. Behind her, good runs from Ellen Weir and Phoebe Anderson secured a team bronze medal.

The men’s U20 race saw Will Barnicoat and Hamish Armitt finish in the top ten helping to secure team gold. They were joined by Henry McLuckie in 15th as the third scorer. Victory to Denmark’s Axel Vang Christensen. A thrilling men’s U23 race saw Charles Hicks, returning following a successful NCAA Championships, subject to a close race with home athlete Darragh McElhinney who took silver. Charles led the race from the outset but took turns for the lead with McElhinney on the final lap, alongside Luxembourg’s Ruben Querinjean.

The women’s U23 team took a third consecutive team bronze medal in the event, led home by Izzy Fry in 21:15 for ninth place. Fry and teammate Amelia Quirk, who finished 12th, were in the leading group early in the race but faded from the leading pack on the final lap. As third and final scorer, Cari Hughes’ 16th place provided a spot on the podium.

In the final race of the day, Jess Judd ran superbly to finish fourth in the senior women’s race, behind Norway’s Karoline Grovdal, Merah Bahta of Sweden and Germany’s Alina Reh. Jess was never outside the top ten in a high quality field, and finished just eight seconds shy of a medal. A good run by Jenny Nesbitt to finish tenth saw her improve by over 20 positions compared to her 2019 performance at these Championships.

Good packing from the senior men’s team was unfortunately not enough to secure them a medal, taking sixth position with winner of the trials race in Liverpool two weeks ago Jack Rowe the first across the line in 18th. The race was won by 1500m Olympic Champion Jakob Ingebrigtsen.

The highlight of this weekend’s domestic calendar was Sunday’s Telford 10k, which also played host to the England Athletics 10k Championships. In near-perfect weather conditions, particularly given an increase in temperature compared to recent days, on a fast course, the athletes certainly made the most of the race.

After a win at last weekend’s Podium 5k in Leicester, Samantha Harrison set out her intent from the outset with a break from the field, a break that saw her rewarded with the win in 32:07, a 24 second improvement and faster than her track best from June, with Kate Holt (32:29) coming in second and Hannah Irwin (32:49) third.

Samantha was not the only one rewriting a PB, there were new lifetime bests for the trio on the podium. There was a 40 second margin of improvement for Kate from her time run at the Saucony Fast Future 10k  in Germany in September, whilst, in her first race over the distance on the roads in two years, Hannah took nearly two minutes off her previous best. The men’s race was equally competitive, with 27 men running sub-30 minutes. A fairly large group ran together for the first half of the race, with the pack bunching at the course’s two 180 degree turns.

Whilst the numbers whittled down it remained a close competition right to the finish line, with only two seconds separating first and third, and the top two recording the same time with 29:06. Alfie Manthorpe was given the nod as race winner (and England Champion) ahead of Lucian Allison, with Matt Clowes third in 29:08.

Those times rewarded Alfie and Lucian with 15 and 22 second lifetime bests for the Alfie and Lucian respectively, and had he not ran a 28:57 PB a fortnight ago in Wilmslow, Matt would also have had a new best to his name.

In a season that has seen him go from strength to strength, Paulos Surafel set another improvement on the roads with a 29:11 in fourth, having made a push for the race win before being reeled in by the three who ultimately finished ahead.

It was not just Telford where athletes were making the most of the unseasonally warm conditions; the Milton Keynes Winter Half Marathon playing host to some equally competitive performances.

In his first race over the distance in over three years, Shane Robinson (66:46) crossed the line first with a 20 second margin ahead of Ronny Wilson (67:06) and Seyfu Jamaal (67:25). If Power of 10 is correct, then that was a fine debut for 13.1 miles by the athlete in second. Jordan Skelly, George Phillips and Aaron Scott also finished in under 70 minutes.

An impressive performance saw Alice McGushin (83:22) finish over 90 second clear of Lucy Waterlow (84:56) and Nicky Steel (86:23). A good run for the Clapham Chaser in her longest race of the year, although having completed the SVP 100K last August, 13.1 miles is certainly not a distance beyond her comfort zone.

Turning to some of the other road races of the weekend and starting with the Blackburn 10k, where Matthew Ramsden (31:27) and Lucy Rawlinson (41:12) took the honours. A good run by Jordan James Rowe (30:47) saw him take over 45 seconds off his lifetime best at the the Mallory Park 10k, which also incorporated the Leics & Rutland 10k Championships, whilst Rosie Weston’s 36:28 gave her the women’s title and a near-one minute PB.

Moving to the village of Llandyrnog in Wales next and the Vale of Clwyd Half Marathon. What a great name for a race! I’m sure Tom Gunby and Owain Llyr would agree, thanks to their times of 86:40 and 93:23 respectively to be first across the line. Another race over 13.1 miles was the Keyworth Scouts Turkey Trot Half Marathon, where times of 82:06 and 73:21 gave Abigail Halcarz and Chris Kilburn respective victories.

Back to the Cross Country

Whilst Britain’s best may have been taking to the grass and mud in Dublin, there was plenty of home cross country action this weekend, although at the time of writing a number of results are yet to be published online.

The Kent Fitness League moved to Betteshanger Park in Deal for its third fixture of the season, where Jonathan Whittall of Medway & Maidstone (30:51) took a close win ahead of Martyn Millard (30:54). There was no such battle amongst the women, with Nichola Evans (34:43) of Larkfield AC having a three minute margin to the rest of the field.

Results are yet to be published for the South of England Masters competition in Lloyd Park in Croydon, but I do know from someone in the race that 2:15 marathoner Nic Torry recorded a comfortable victory in the men’s race.

The North Eastern Cross Country Championship titles were taken home by Gateshead’s Calum Johnson, his time of 36:14 seeing him across the line over a minute and a half ahead of the 285 other men competing. Catriona MacDonald of Morpeth Harriers was equally dominant in the women’s race, crossing the line 44 seconds ahead of Emma Bramley (30:15 to 30:59).

It’s not quite cross country, but I end with the Garda Trentino Xmas Trail in Italy, a 30km race incorporating 1300m of climbing with strong fields. Our own Robbie Britton finished eighth in 2:37:54, with the race won by Christian Moderna in 2:23:36. Natalie White finished an impressive sixth (3:13:57) in a field headed up by Julia Kessler, her finishing time of 2:48:48 ten minutes ahead of the second placed athlete.