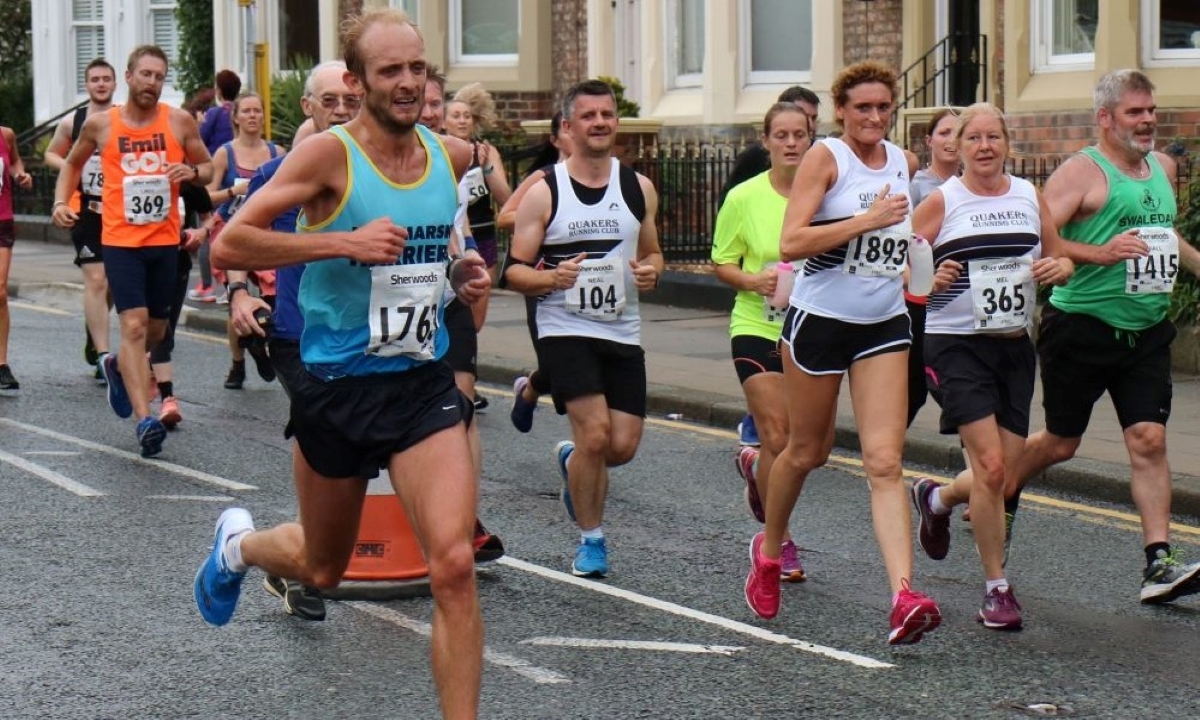 Dominic Shaw wins Darlington 10km in sub 30, Holly Archer and Josh Grace are crowned ‘Champions of the Road’ in Preston and GB have a great day out in the mountains. We take a run through this week’s action on the roads, track and trails.

Sunday saw Preston or ‘Pre5ten’ hosting the England Athletics 5 mile championships and a 10 mile race. Holly Archer of Cambridge & Coleridge AC can head into next week calling herself a Champion of the Road after running a 27:38, a time which would equate to a 2 second PB over 10k.

That result was enough to hold off Fife AC’s Annabel Simpson (28:43) and Rotherham Harriers’ Sophie Cowper (29:45) in second and third.

Champion status for the men went to Josh Grace of AFD in a PB obliterating 23:43 with Cambridge & Coleridge bagging another podium spot thanks to Jack Gray’s 23:46. Ben Johnson of Southport Waterloo AC came third in 24:22.

Champions of the Road

The Champions of the Road Series is a new addition by England Athletics this year which ‘offers individuals and club teams competing in three or more championship events the opportunity to become the outright England Athletics Champion of the Roads’. This race was the 4th in the series – keep your eye on the results of the rest to see who wins the inaugural honours over all:

As well as the EA championship 5 mile race there was a City of Preston 10 mile edition which was won by Joe Beech in 54:51 and Amie Bagnall of Perstatyn RC in 1:05:37.

Second place honours went to David Morris (Cheshire Harriers) in 59:27 and Southport Waterloo AC’s Tracey Allen in 1:08:26. Daniel Deek Schofiled of Warrington RC couldn’t quite dip under the hour but got to take the bronze with his time of 1:00:18 while Emma Bailey of Barlick Fell Runners ran 1:09:33 for her third place finish.

With results still to come in there have already been some solid performances at the European Team Championships for British athletes. Shelayna Oskan-Clarke clainmed a silver medal in the 800m with 2:01.45 and Rosie Clarke a bronze in the 3000m SC with 9:39.85. Emily Hosker-Thornhill finished 9th in the 3000m with 9:19.99 and Jess Judd was 6th in the 1500m running 4:09.89.

At the time of publishing we were waiting results in the women’s 5000m and men’s 3000m. A busy mid week of racing

The Hasty Hare 5k saw over 200 runners take on the final Sri Chinmoy summer race in Battersea Park on Monday. It was a fitting finale as Seyfu Jamaal of London Heathside ran a stunning PB of 15:04, chased home by Nicolas Besson who also set a new PB of 15:08.

That’s not bad at all in any book but it’s especially impressive considering Besson had won the Self Transendence 10k there only two days earlier in 31:58. Here’s hoping those speedy legs get a bit of a rest next week! Billy Hobbs of Tunbridge Wells Harriers was not too far behind taking third place in 15:28.

Emma Davis of Ward Park Runners made a rare 5k outing to update her 2016 PB and finish first in 17:01 (we’ll see more one-second margins later in the roundup). Clapham Chasers took second thanks to Lucie Custance also setting a new PB and running 17:28. London Heathside’s Rebecca Piggot held on to hit 18:00 on the nose and take third place.

Tuesday night saw the Morpeth 10k take place with NECAA medals and prize money at stake. Hannah Wood of Low Fell RC went home with the £60 prize for the women thanks to a run of 37:43 and Jordan Bell took of Blackhill Bounders took the same for the men’s race in 32:35. Second places wen to a North Sheilds duo of Steph Maclean -Dann (38:55) and David Green (33:05) while Morpeth Harriers doubled up in third place thanks to Robyn Bennett (39:10) and Karl Taylor (33:27)

On through the week and Wednesday night meant time for the Netherhall 10k. Champion mountain runner Ricky Lightfoot could not only be seen pounding the tarmac but winning the race too in 32:37 for his club, Ellenborough AC. Mark Walsh was never going to catch him, finishing in 33:30 but grabbed a second place for the host club. Border’s Blain Rooney came third in 35:12.

The final in the Yateley 10k night summer series took place the same evening and was notable mainly for the 4th place runner. That might seem odd but it was Louise Small of A F &D who took that honour and in a time of 34:26. They might need to re-jig their awards and take note of this amusing situation noted in the US this week:

Time are a changing. They didn’t have an award for the first place male. Guess they weren’t expecting a female overall winner #bravelikegabe @fast_women pic.twitter.com/EUGJwN8IVC

Small’s clubmate Joe Morwood (30:13), Gareth Crosley (Reading AC, 34:14) and Stephen Gumbrill (Hart Road Runners 34:23) were the only people ahead of her and you have to look all the way down to 40th place OA to find the next women’s name, that of Edwina McDowall (Headington) who finished in 39:11, a mere eight seconds before Alex Lane crossed the line in 39:18.

On Thursday at Wythenshawe Park Track it was time for the final of another series – the Sale Sizzler 5k in aid of St Ann’s Hospice. Kirsty Longley was the winner in 17:04 in a new course record. The Liverpool Pembroke Sefton runner was joined on the podium by in form Elizabeth Renondeau (17:23), who is currently ranked 2nd v40 at 3,000m, and Laura Hesketh (17:29).

The men’s race was a touch closer to the season record (14:25) as Michael Cayton brought it home in 14:57, running within 10 seconds of his PB. French athlete Quentin Guillon was next up in a tantalising 15:01. Those ‘01’s always make you wonder if you could have given just that bit more, don’t they? Though in a 5k the answer is usually no! Rounding out the medal spots was Tom Charles of Trafford AC. 45 men ran sub 17.

Dominic Shaw retained his title at the SG Petch Darlington 10km breaking his own course record with a fantastic 29:52. Altrincham’s Mohammad Abu-Rezeq was second in 30:39 and Lewis Gamble-Thompson third in 32:08. New Marske man Shaw has been in fine form in 2019 with a PB at 10,000m (29:37) and running 64:28 at Barcelona Half Marathon. Saturday saw the return of the Pride 10k in Victoria Park, London. Despite the high winds Josselin Polini of home squad, Vicky Park Harriers won in 33:10, a little off his best of 32:19 set at a Run Through event at the Olympic Park earlier this year, but given the conditions that’s a decent time. Comfortably behind Polini was London Frontrunners’ James Dance in 34:14 and Thomas South of Dulwich Runners in 34:33.

It was London Frontrunners that led the women home with Jen Baird securing the top spot in 38:24. Theresa Murphy of Kent AC was close on her heels with 38:24 and Isobel Rea kept the top three tight finishing only 20 seconds behind the lead in 38:42

Stour Valley Path was being pounded not just by the weekend’s gales but also by hoards of by ultra runners for what is one of the swifter 50 and 100k races.

A hat-tip also goes to those who braved the weekend weather for the Hermes Thames Meander Full and Half Marathon. With winds at times in excess of 50 miles an hour the race was won by Francisco Perez Cutino in an impressive time on a trail course of 2:40:42. Louis Wright was 2nd in 2:51:12 and Constantin Schaaf 3rd in 2:55:14. The women’s winner was Anneka French in 3:16:23. Mandy Dohren of Victoria Park Harriers was 2nd in 3:20:49 and Krista Brooks was 3rd in 3:49:18.

Quality performances at Newark Half

The popular Newark Half Marathon also took place on Sunday. Joe Wilkinson of Lincoln & Wellington  was the clear winner in 67:29 ahead of Phil Wylie (68:41) and William Strangeway (69:09). A high qaulity women’s field saw a close battle between the eventual winter Samantha Harrison of Notts AC (76:26) and Calli Thackery (76:56). Third place went to local athlete Cloe Hubbard in 80:31.

The best go head to head in the mountains

Both the men’s and women’s records fell at the prestigious Sierre-Zinal mountain race in the Swiss Alps today. In the men’s race both Kilain Jornet and Petru Mamu ran under the previous course record of NZ international Jono Wyatt. Maude Mathys and Judit Wyder also broke the women’s record set by Czech star Anna Pichrtová.

Jornet, ran an astounding 2:25:35 to take minutes from the previous mark. The mountain running star lead from the start in a courageous display of front running. In the final stages Eritrean Mamu, who was banned in recent years for a positive doping test, nearly caught the Salomon athlete running 2:26.31.

Swiss athlete Maude Mathys has also tested positive for banned substances in recent years. She also led from the gun and crushed the women’s record. The race was not as close for the women’s but Swiss orienteer Judith Wyder also snuck under the previous CR by six seconds. British performances were strong once again with Robbie Simpson and Andy Douglas both finishing in the top ten. Simpson, who has podiumed at the event before, was fifth and Andy Douglas was a minute behind in sixth. Fast10’s Jacob Adkin finished in the top 20 with a 19th place.

On the women’s side Holly Page, just one week after finishing second at the Tromso skyrace over 8 hours, was an excellent eight place. Page overtook a large number of runners on the short, but steep, final descent.