Echos of the ACP 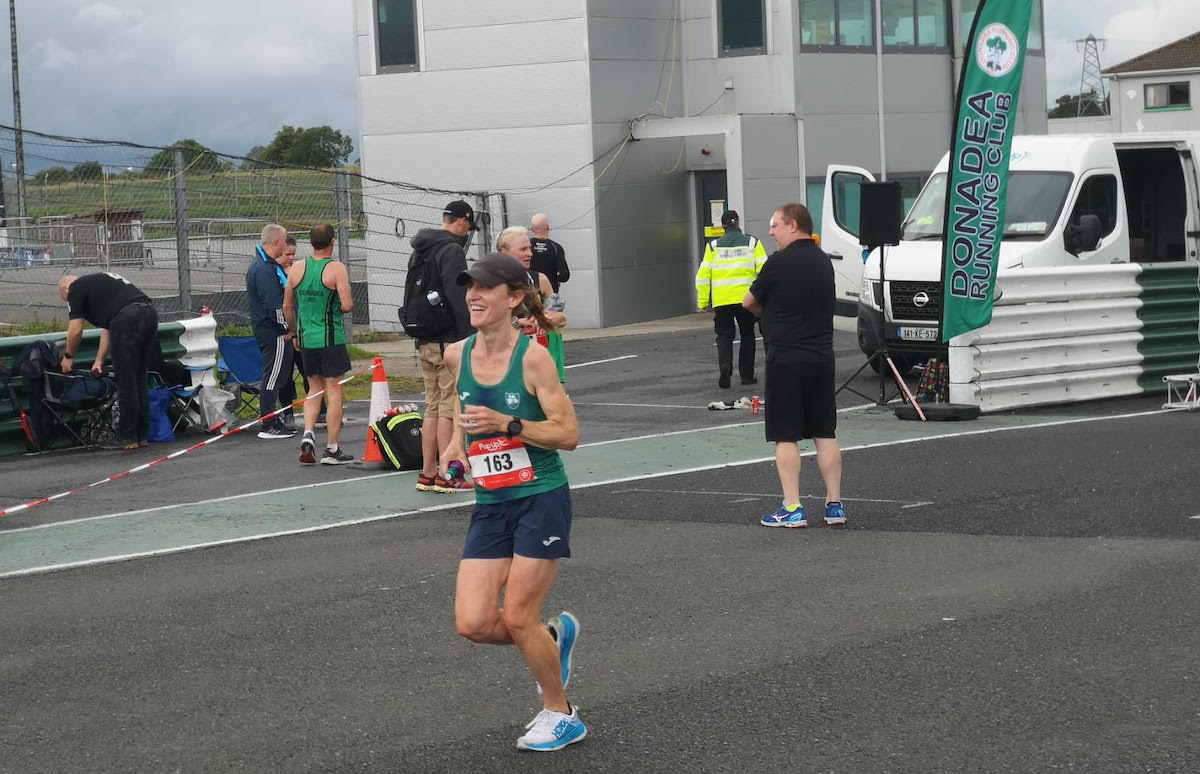 The Anglo Celtic Plate is a race with huge pedigree pitting some of the best ultra runners from Ireland, Northern Ireland, Wales, England and Scotland against each other over 100k. In advance of this weekend’s race Sorcha Loughnane reflects on her experience at the 2021

It starts off easy. Too easy. The pictures from the first 20 miles make us look like hobby joggers. We’re chatting and laughing. It feels like a fun day out, meeting new people with the same (admittedly odd) interests. I take a bathroom break, link in with some new friends, and we chat and laugh some more. But the chatting and laughing are a little more laboured. There are periods of silence – just breathing and running together.

We’re lapped by a tightly bunched group of men – with two women, Caitriona Jennings and Samantha Amend – both elite international ultrarunners – in among them.

“The Clydesdales” one of my new friends calls them, as the cantering hooves recede into the tarmaced distance. The Clydesdales have eased past, their ponytails swishing, and I’m suddenly acutely aware of my pedestrian pace.

We’ve run a marathon. A milestone – but also a reminder that we have quite a way to go yet. All of a sudden, its a bit less fun. The reality that we have another marathon and a half to go lingers in the air, shortening our stride and interrogating our resolve.

One of my new friends is feeling sick. I’m actually feeling great. Probably because I’ve taken on so little fuel. This will be interesting. Much to the amusement of other runners, i’ve brought two burritos – my ultra fuelling knowledge is based entirely on what i’ve read about UTMB and other, much longer trail races. UTMB this ain’t, and the idea of eating a burrito seems comically inappropriate. I’m pretty sure I spend miles 30 to 40 jealously watching other runners slamming gels and carb drinks into them, while I continue to cautiously sip my Maurten, terrified that my hopeless runners belly will turn at any second. I stop at the aid table, forcing myself to eat a banana, and find that it’s actually amazing. I am triumphant.

The triumph of being able to stomach a banana offers only temporary respite from what is now the most psychologically difficult phase. The celebratory fun vibe has been replaced by a grim determination. We’re in no man’s land at mile 40: far enough in to be hurting, too far from the end to be able to indulge the pain. This is where concentration starts slipping; a wandering mind makes for erratic pacing.

The aid table becomes my distraction, a dangerously easy way to break the monotony. I’m not even sure why I’m stopping each time I pass it, I can’t actually stomach anything. I think i probably just want a hug. I’m losing about two minutes per lap to this nonsense. Get your shit together Sorcha. When the conversation dries up

No-one’s really talking anymore. Some are walking. Caitriona Jennings laps me again. She’s long since lost the rest of the Clydesdales. The sub-elite lads who were her co-canterers are suffering. I pass some of them – walking, limping. I’m not lapping them – they’re already several laps ahead of me. Even if they walk the rest of the way, they’ll probably still beat me by at least an hour. That’s just one of the things that is so mind bending about a 100k race on a 56-lap loop.

I’ve stopped obsessing about my fuelling now. I’ve managed a banana, I’m sure I’ll be fine. My quads are already burning – tight, heavy, not working properly. Even the gentlest of inclines causes them to tighten and scream, begging me to stop and sit.
I decide to change my runners. They weren’t really bothering me but I decide they were. Its like when you’re lying in bed, warm and cosy, and suddenly wonder if you might need to pee. Then that’s all you can think about. Mostly I’m aware that the act of changing them will give me an opportunity to stop and sit. Which it turns out is a terrible idea – starting again is torturous and any ragged rhythm I had managed to develop is hopelessly lost.

I start getting really hot. It’s not that hot a day but I can’t cool down. It might have something to do with my burning muscles. I decide this is how it will end for me – a catastrophic inability to lower my core temperature. But then the rain comes. Apocalyptic, epic, heavy cold rain. The best rain ever. I’m wading through rivers, delicious rainwater cooling my aching quads. I’m not hot anymore, and that feels amazing.

I make a final friend. Everyone stopped talking a while back, but now it feels like the right time to share some suffering. I’m at the acceptance stage of this trauma; she’s definitely at anger. She hates this 100k and everything about it. We’ve got less than 10k to go and I’m thinking she might throw in the towel. I feel triumphant that my mental coping strategy of acceptance is far superior.

Turns out acceptance is not actually a great coping strategy for the end of a 100k. I’ve slowly descended into a mindset of knowing I’ll finish, but no longer caring how. My acceptance extends to the 10 minute miles I’m now grinding out, with no real goal in terms of finish time. Anger would have been a really productive mindset right about now; fuck this race, fuck ultras, I’m finishing this in a blaze of glory! I probably could have done with some of
that.

They told us they’d let us know when we had 6 laps to go. I reckon I must be at that – someone tells me they think it’s 5, and that’s it – now we just run and count.

Unless we’ve miscounted. I’m going by my watch, which is almost certainly unreliable at 50+ laps. My family are there to cheer me on and I triumphantly give them the “two laps to go” salute. At this stage they know there’s been a miscount. They can’t bring themselves to tell me. So off I go on what I think is my penultimate lap.

It feels great. I might even be speeding up a bit (although my thighs are stiff as boards so its unlikely.) Caitriona Jennings finished ages ago so I’m not being lapped by her anymore. Or anyone. I guess a lot of people must already be finished, lucky sods. That’s going to be me in one lap! But wait. My family are waving and shouting something. They’re giving me the…two laps to go salute? NOOO. I’m tearily furious. It’s the only point, at almost 98k, that I think I might give up. But finally, crucially, the anger comes, kicking my mind and body into some other gear. Fuck this race. Fuck ultras. I’m finishing this in a – well, the blaze of glory is long since lost, but if I can finish in a blaze of personal achievement, a blaze of not-terrible-for-a-first-100k, that will do.

And then it’s over. I feel awful. Horrible. My daughter and nephew are running towards me with Irish flags and i think i manage a sickly smile and weak hugs. My time was – fine. Not great, but fine. It’s fine enough to help the Irish women win their first Anglo Celtic Plate, largely due to Caitriona Jennings’ Irish record-breaking run.

To be fair, it’s probably not possible to run a good 100k on a banana, a couple of gels and a few sips of Maurten. The burritos remain tauntingly unopened.

But I did it. I can do it. I could do it again. Whether I will or not is another question – one I probably already know the answer to. There isn’t really another experience like it – the camaraderie with the other runners and volunteers; the physical extremism; the fragmented inner world the runner creates for themself; the mind-body interplay; the edginess. The only thing I can really compare it to is childbirth – not very enjoyable at the time, but the pain is forgotten quickly, leaving only the disjointed and unreliable memory of a unique and special experience.

Best of luck to all racing the Anglo Celtic Plate in Perth. A very, very small part of me wishes I was there.