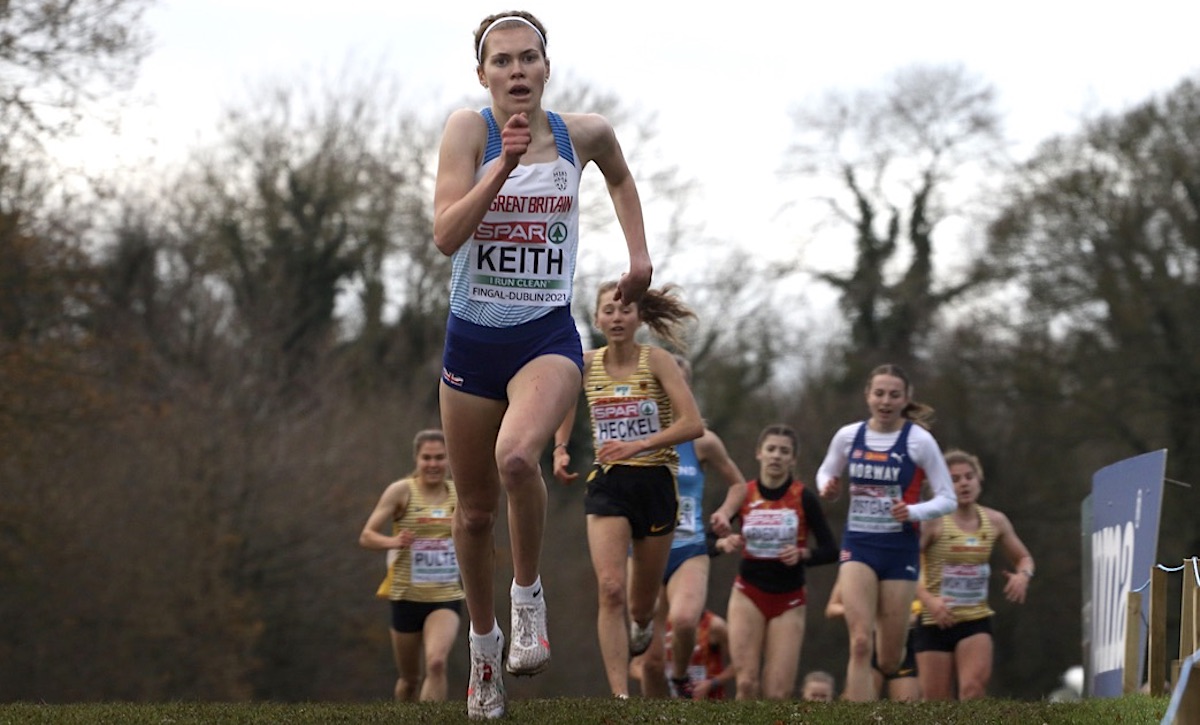 By all accounts the 27th edition of the European Cross Country Championships in Fingal-Dublin, was one of the best in the quarter of a century or so since the inception of the event way back in the mid 1990s.

Once again Team GB excelled in topping the medal table in taking no less than five golds. The Mens under 20s, Senior Women and Mixed Relay Team all took the spoils, whilst Charlie Hicks took a fine U23 individual title along with a 19 year old from Inverness who won gold at the Sport-Ireland campus.

I catch up with Megan Keith just after her win where she is clearly still on a high after a monumental battle between herself and the German Emma Heckel, with the former producing a sustained gutsy uphill surge on the final lap of a challenging 4k circuit to take the spoils (13m41s) by 3 seconds ahead of Norway’s Ingeborg Østgård with the aforementioned Heckel having to ultimately settle for bronze.

Having has the chance to catch her breath, the Edinburgh University student tells me that, “It feels absolutely amazing to be European champion although it still doesn’t feel real, I think it will take a while to sink in!” In terms of an added bonus, along with 14th-placed Ellen Weir and 17th-placed Phoebe Anderson, Keith led GB to team bronze, behind gold medallists Germany and runners up from Spain.

So at what point did she know she was going to win I ask? With a modest touch she confesses that, “But I was completely certain someone was going to pass on the finish straight so didn’t believe it until I crossed the line”. Focus on the process

I then try and take Megan away from thoughts of her achieving her goal towards the process side of the race. I want to know which parts of the course she found most challenging. With a wry smile she responds that, “I knew going into race the hills and mud would be the toughest parts of the course and the bits I could potentially make grounds. On both of the long laps I knew I had to work hard up the hills as there were so many fast 1500m girls in the field with good finishes”.

This was Megan’s second appearance for Team GB in the European under-20 cross country championships. After Covid put paid to the championships which should have been staged last December, we have to track back to two years ago in Lisbon where she picked up a team gold medal whilst picking up invaluable experience in finishing a creditable if unspectacular 27th overall.

Having raced extensively already this winter in British Cross Challenges, I ask the young woman who edged out Jess Bailey (U17) and Alice Garner (U20) in the trials what her Christmas training plans are likely to include under the watchful eye of her excellent coach Ross Cairns.

“I think I’ll be doing more of the same cross country training I have been doing the past few months and probably some longer reps since all my races over the country get longer after Christmas”, she says – clearly alluding to the significance of an endurance athlete building a strong aerobic and strength endurance base at this point of the periodisation cycle.

Its clearly too soon for the athlete who placed 4th over 3000m at the European Juniors in Tallin last summer (PB of 9m16s) to begin to think about the summer season, despite her also sporting promising 1500m and 5000m bests of 4m19s and 16m08s respectively. So I steer the conversation to what the rest of this winter may have in store at least until March 2022. Clearly a fan of the mud, she is quick to assert that, “The rest of winter will hopefully include more Cross Country races.

I am looking at targeting both the Home Countries Cross Country International in Antrim (Saturday 22nd January) and the ‘National’ (Saturday 26th February)”.

In an allusion to the conviction held by the likes of the late great Peter Coe who once famously said, “If speed is the name of the game, never stray too far away from it”, Megan signs off by conceding that, “there is the potential for an indoor race this winter”.

Matt Long has served as both an England Team Manager and England Team coach and welcomes contact for coaching support through matt longcoach@gmail.com