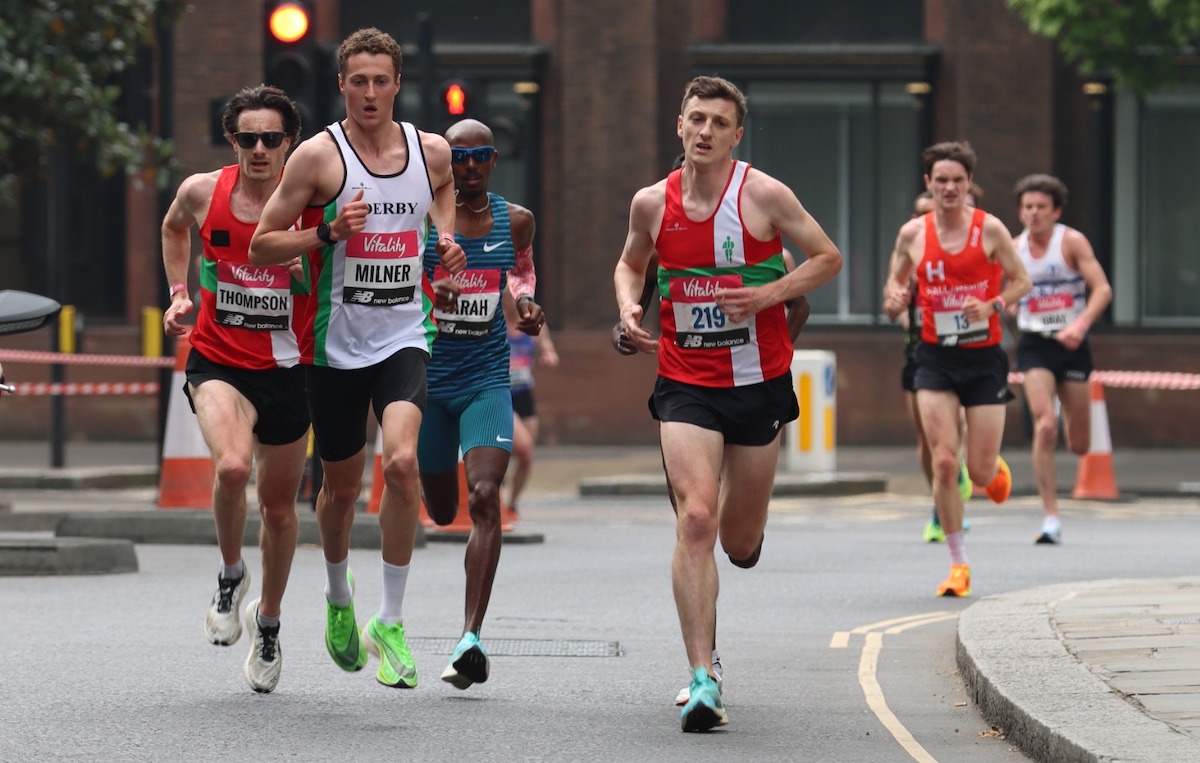 There has been no shortage of racing activity over the past few days and long weekend, so much so we have pushed the round up back by 24 hours to pick up as much as possible. Let’s get straight to it with action from the roads, track and trails.

One could suggest the fields assembled for the Vitality London 10,000 were the strongest for a road 10km since the start of the COVID pandemic, despite late withdrawals from Andrew Butchart and Charlotte Purdue. The women’s field was headed up by Eilish McColgan, fresh from her 14:45 5k British Record in Malaga last weekend, alongside Tokyo Olympian Jess Piasecki, Sam Harrison, Clara Evans and Naomi Mitchell.

Eilish’s eyes were firmly on adding the 10k British Record (plus European Record) to her collection by improving on Paula Radcliffe’s 30:21. This proved slightly out of reach as Eilish crossed the line in 30:23, two seconds shy of Paula’s record but a 16 second improvement on her mum’s Scottish Record. Nothing should be taken away from the performance, however, which was a largely solo effort after the first couple of kilometres, with just the camera motorcycle for company, on a course that is neither the flattest nor quickest (“great for racing, but not the fastest” as Steven Gardner put it), and I am convinced that 30:21 is on borrowed time. The men’s race provided an ‘upset’ of sorts, with Ellis Cross taking the biggest win of his career with 28:40, ahead of four-time Olympic Champion Mo Farah (28:44) and Mo Aadan (28:44). A lead group containing the trio alongside Chris Thompson and Hugo Milner ran together for the first half of the race, before one-by-one dropping to the leading three. A decisive kick from Ellis in the final kilometre saw him move away from the two Mo’s, with neither able to respond. In a quality field it was a fantastic result for the Aldershot athlete, who was not part of the elite field, and he has also allowed the press to generate clicks with “club runner beats four time Olympic Champion” headlines.

In fourth, Chris Thompson’s 29:10 is a British V40 Record. An all-round fantastic morning of racing in the capital.

There are a number of races that were born during the COVID pandemic, and Friday Night Under the Lights has proven to be one of the most popular. With strong fields and a fast course it has played host to some lightning fast times over the past twelve months, and Friday’s edition was no different (except for the extra addition of runners passing the film crew for Magic Mike 3!).

Toby Cooke had the race of his running career, moving away from Jacob Allen (14:06) and Alex Lepretre (14:09) on the second lap to cross the line in 13:58. Whilst his first road 5k since 2016, that time is a 30 second improvement on the Winchester athlete’s best this year at the fast Dulwich Parkrun and also 32 seconds faster than he has gone on the track.

Holly Dixon had a good run to finish in 16:04, just five seconds shy of her PB set at Ardingly last year and ten seconds quicker than running on the Battersea Park track at the Comeback 5000 a fortnight ago. She was followed across the line by Louise Small (16:28) and Megan Marchant (16:29), the duo both setting PBs in the process.

Earlier in the day and about two miles to the north, the Serpentine Last Friday of the Month 5k took place in Hyde Park and saw Ollie Garrod (15:24) and Katie Rowland (17:28) take the honours. Whilst Friday Night Under The Lights has built its reputation for fast racing in the past year, it is fair to say the pedigree of the Race for Victory Cardiff 5k has grown since its inception in 2016. The ever popular event returned to Whitchurch Village on Sunday evening with strong fields across both genders.

The races did not disappoint with Jake Smith taking a dominant win in the men’s race, his 13:59 clocking a Welsh All Comers Record and a 15 second improvement of Adam Hickey’s 2019 Course Record. It was also a 24 second PB for the NN Running Team athlete, a mark he set just one week ago in Bristol, and his first time under 14 minutes on the road. Behind him, there were good performances from Alex Brown (14:17) and Thomas Bridger (14:22 PB) to round out the top three.

Danielle Hodgkinson (15:50) had her best race of 2022 to win the women’s race, taking nearly half a minute off her previous best – run on 10 April – in the process. There were also significant improvements for Ellie Wallace (15:59) and Anna Bracegirdle (16:09) to complete the podium, the pair entering the race with bests of 16:04 and 16:43 respectively. This weekend may have seen some runaway victories on the road and track, but it was a different story at the at the Mid Cheshire 5k where seven seconds separated the top seven finishers, and just three seconds split the top three. It was David Devine (14:19) who came out victorious ahead of Cameron Bell (14:20) and James Knockton (14:21).

It was not so close amongst the women, however, as Lily Partridge came home in 15:46 comfortably in front of Amelia Samuels (16:01) and Mollie Williams (16:06). All three were rewarded with PBs. A noteworthy performance from Kirsty Longley, who’s 16:48 finish cements her position as third on the V45 UK all-time list behind Bronwen Cardy and Jo Pavey.

Sticking with 5k but moving to Germany, where Emile Cairess recorded a 13:38 5k PB at the Adidas adizero Road to Records event in a race where Yomif Kejelcha and Nicholas Kimeli ran the third and fifth fastest times in history over the distance (12.53 and 12:55).

The highlight of this weekend’s domestic track action has been the BUCS Outdoor Championships, making a welcome return after a two year absence due to COVID at a new home in Chelmsford. The three-day event saw students from across the UK take to the track and field, including appearances from some top-class elite athletes.

He may have been running in the “b” final, but a strong and solo effort from Zakariya Mahamed saw him take the title with 14:15.39. It has been a good few weeks for the Southampton athlete after taking victory at the Comeback 5000 last month. Silver and bronze went to Luke Duffy (14:18.81) and Alfie Manthorpe (14:19.22) respectively. That time is a shade outside Luke’s lifetime best, whilst Alfie’s efforts enabled a 30 second improvement on his PB.

The two lap races saw a dominant performance from Issy Boffey (2:05.17) as she built a gap from the rest of the field within the first 100m, and a surprise victory in the men’s race for Dan Howells (1:47.97 PB), with pre-race favourite Jamie Webb finishing fourth.

Back to the Roads

Whilst most eyes were focused on the streets of London, this weekend saw a host of other 10km races across the country. They included the Alderley Edge Bypass 10K where victories went to Ben Riddell (31:26) and Ruth Jones (35:03), with Ben Heron (31:43) and Philippa Taylor (39:49) taking the honours at the Langtoft 10k.

Crossing the border to Scotland and it was Iain Whittaker (33:25) and Laura Mooney (42:15) taking the plaudits at the Forth Road Bridge 10k.

Elsewhere on the Roads

Staying in the north and to the Gateshead Half Marathon, organised by Runthrough, where Conrad Franks (70:48), finishing almost two minutes ahead of the rest of the field, and Laura Thompson (88:33) were victorious over 13.1 miles. The associated 10k race went to Sally Braithwaite (40:33) and Chris Alborough (33:27).

Adrian Mussett had an impressive outing at the Recipharm GEAR 10k in Kings Lynn with 32:06, the best result for the V50 athlete over the distance since 2016. Meanwhile Laura Thomas followed up her PB at the Manchester Marathon with 36:18.

The Morecambe Half Marathon saw Preston Harrier Sam Evans (74:16) finish over a minute clear of Jordan Strachan (75:21) and Maciej Trzeciak (78:19), whilst Erica Booth (92:10) was the quickest woman in the field. The associated 5k race was won by Nicola Archer (18:45) and Jackson Sloan (16:54). Sticking with the half marathon but moving from Morecombe to Staffordshire, Carl Moulton (72:55) and Kelly Butler (86:19) were victorious at the Uttoxeter Half Marathon.

Record Setting in the States

I usually leave my quick-fire round up of track activity from the States until the end, but this weekend it seems fair to move it up the order with two British Records set at the Payton Jordan Invitational.

Neil Gourley (1:46.38) was less than three seconds off his PB in his first race outdoors of then year at the Desert Heat Classic in Arizona, whilst fellow Scot Aidan Thompson recorded a win and lifetime best over 3000m (8:07.85) in Nashville.

Organised by Glasgow Athletics and held in conjunction with BMC races, the Scottish 10,000m Championships saw titles go to Sandy McDougall (37:51) and James Donald (29:29.67), both of Dundee Hawkhill Harriers.

A sunny Battersea Park played host to the London Open, organised by Worthing & District Harriers, where Archie Davis opened his season with a 1:49.48 clocking over 800m. Davis’ Brighton Phoenix clubmate Alice Wright left South London with a 2:10.56 PB over two laps. Jack Woods (4:20.44) and Emma McCluskey (5:19.29) were quickest over the mile. Harrow AC’s second open meeting took place on the other side of the River Thames and two days earlier and saw Curtis Stevens (4:46.52) and Sofia Latham (5:34.61) fastest for the mile, the former in his debut over the distance, with Izzy Ions (2:24.33) and Finn Combe (2:04.99) doing the same over 800m.

The week also saw a handful of regional British Milers Club meetings, at Leeds, Exeter and Wormwood Scrubs on Monday, Tuesday and Wednesday respectively. At the former, the best times were recorded by Corey Campbell (8:17.90) and Abbey Brooke (9:49.32) over 3000m, with both setting lifetime bests, and by Jodie Martin (2:11.30 PB) and Charlie Roberts (1:53.56) in the 800m.

U17 athlete Fleur Todd-Warmoth’s performance was the highlight of the races at Wormwood Scrubs, her 9:16.35 for 3000m moves her to third all time on the age group rankings behind Jess Judd and Emilia Gorecka. Rowan Meill-Ingram was the quickest overall over the distance (8:21.17). Archie Parkinson (1:54.66) and Nicole McGovern (2:12.63) took the honours over 800m.

Ending this week’s round up is the 67th running of the Three Peaks Fell Race, which played host to the British trials for the European Mountain and Trail Championships. Victories went to Brennan Townshend (2:55:34) and Sarah McCormack (3:23:21) on the course that takes in 23.3 miles and over 5,250 feet of elevation gain.

The GB team had automatic selections for the first two eligible athletes so in addition to Townshend Billy Cartwright will be looking forward tot he call from the selectors. For the women Sharon Taylor of Helm Hill and Nichola Jackson for the first two GB athletes home. Lowdown on the NCAA
Potteries craftsmen