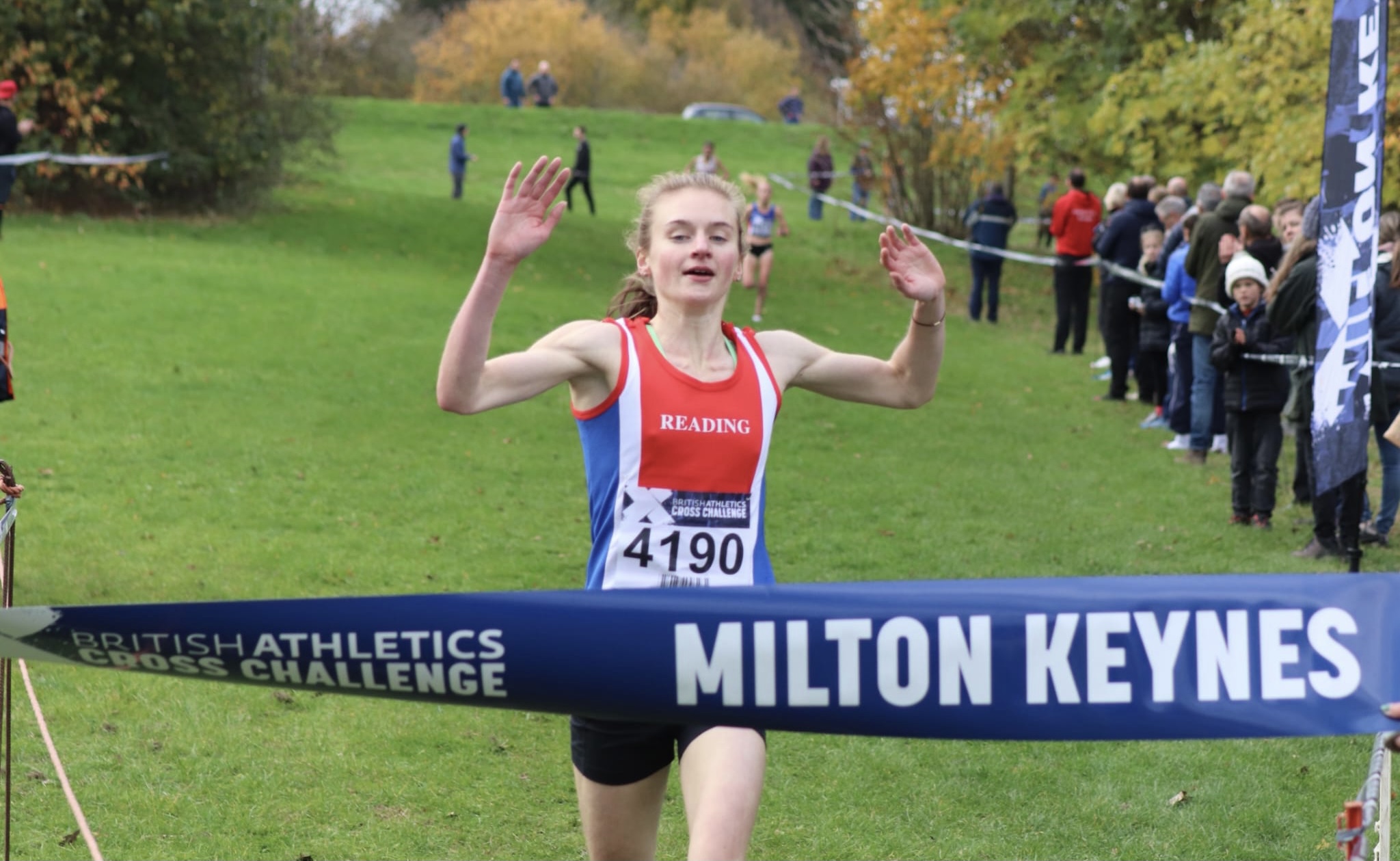 It is fair to say the focus of this article is very much cross country, so much so those two words appear ten times in this article. However, it is only natural for this time of year and, with some of Britain’s best athletes in action across numerous races, it is only fair that the focus sits here. I hope you have your spikes, trail shoes or just your reading glasses at the ready.

The highlight of the cross country action this weekend was almost certainly the British Athletics Cross Challenge at Teardrop Lakes in Milton Keynes, the second of five fixtures that form the series, where races took place across the age groups before culminating with two excellent senior races.

In particular, the women’s race provided plenty of quality, including Jenny Nesbitt, Kate Avery and Hannah Irwin. Jenny Nesbitt led for much of the early parts of the race, trailed by Jess Gibbon, Hannah and Kate; however, the second lap saw Jess move into the lead, a position she did not relinquish for the remaining distance. Indeed, she crossed the line in 19:41 to Jenny’s 19:50, a step-up after finishing third at the first Cross Challenge event in Cardiff last month.

The men’s race was an equally close affair, with Hugo Milner and Zakariya Mahamed taking an early lead from the outset.

The two athletes were running side-by-side for much of the 9.6k race, before a final turn of speed from the Derby athlete to take his second title in as many fixtures, crossing the line in 28:35 to Mahamed’s 28:38. Having been in the position for much of the race, Bedford’s Dan Jarvis finished third in 28:52. Earlier in the day, Megan Keith and Hamish Armitt took wins in the respective junior races, with Megan’s 23 second margin of victory the most impressive of all races.

The Cross Challenge moves to Sefton Park in Liverpool in a fortnight.

No Shortage of Cross Country

A multitude of regional races also took place this weekend, and I must start with an apology if I have missed any; the nature of XC scoring means the majority of events have yet to make their way onto Powerof10. Omissions are unintentional!

I’ll start off at the Surrey League, with the women’s races and men’s Division 1 race taking place at Wimbledon Common, with the remaining men’s fixtures a day later at Denbies Vineyard.

Clapham Chasers made the most of running close to their home patch at Wimbledon with both a team and individual victory, with Olivia Matthews (22:19) finishing ahead of Thames Hare & Hounds’ Ruby Woolfe (22:31) and Guildford & Godalming’s Carolyne Baxter (22:36) in Division 1.

At Wimbledon Common, it was Guildford & Godalming’s Andy Coley-Maud (26:20) who took the honours in Division one, finishing ahead of Dylan Evans (26:27) and Dan Cliffe (26:42) of Belgrave Harriers and Hercules Wimbledon respectively. Dan’s position helped Hercules to finish top of the nine league teams, with five athletes in the top eight.

In good conditions on a challenging course at Denbies Vineyard in Dorking, Dom Nolan of Croydon Harriers recorded a commanding win in Division two, his 28:08 time almost two minutes ahead of Nick Bowker (29:56) of Clapham Chasers and clubmate James Hancock (29:58). Nolan’s next race will be the British Athletics Cross Challenge in Liverpool in a fortnight, which doubles up as the trials for the European XC Championships.

On the same course, George James (30:02) crossed the line first, leading a top-three for home club Dorking in Division three/four.

Kent Athletes in Action too

Moving slightly eastwards and Danson Park in Bexleyheath hosted the Kent League on Saturday. Over a 7,950m course, it was Verity Hopkins who finished top of the podium, her 29:11 time 18 seconds ahead of Cambridge Harriers’ Megan Marchant (29:29). A successful day for Tonbridge’s women, taking five of the top ten placings. The U20 and U17 titles were taken by Charlotte Young (17:01 over 5,120m) and Amy-Jayne Goodhand (17:12 over 4,620m) respectively.

In its second fixture of the season, the Met League moved to Welwyn Garden City, with both the men and women in action. London Heathside took three of the top four spots in the senior women’s race, with Beth Hawling (28:09) taking an impressive win, finishing almost 90 seconds ahead of clubmate Tamara Armoush (29:38) and Victoria Park & Tower Hamlets’ Laura Kaye (29:59).

For the men it was a similar story for Highgate, with the north London club finishing in first, third and fourth. The margin of victory for Jacob Allen was considerably smaller however, finishing in 23@58 to Thomas Frith’s 24:17. Alexander Lepetre was third in 24:18.

Returning from the Marathon

Starting with the cross country action happening in the south does not mean it was home to the only high quality racing in the mud this weekend. Indeed, the Manchester League may have provided the greatest depth of the regional leagues over the past 48 hours.

Taking place in Sherdley Park, Jonny Mellor (31:34) finished ahead of Sale Harriers and Fast 10 athlete Nigel Martin (231:42) and Callun Davidson (32:00). This was the Liverpool Harriers’ first cross country race of the year (and, according to Power of 10, his first since 2013!) and his first competitive action since his eleventh place finish at last month’s London Marathon.

A rare outing over the XC and the win for @jonnymellor9 in yesterday’s @ManAreaXC 👏🏻 pic.twitter.com/yrKLuhlff0

There was a close finish in the senior women’s race, with the top two separated by just two seconds. Wirral AC’s Sophie Tarver just got the better of Lauren Heyes of Leigh Harriers, finishing in 26:48 and 26:50 respectively. The two were clear of the rest of the field, with the top three completed by Sale Harriers’ Sophie Wood (28:09).

Finally, the Hampshire League moved on to King’s Park in Bournemouth. Jack Rowe, fresh from his win at the Great South Run, took a commanding victory (28:28) in front of Stuart McCallum (28:54) and Ben Bradley (29:10) in the men’s race.

Other XC races taking place this weekend included the East Yorkshire League in Welton, Herefordshire League in Croft Castle, Birmingham League in Crewe, Sussex League in Brighton and the Cumbria League in Keswick. Despite my best efforts, I’ve not been able to locate results for these – but I’ve no doubt they hosted some equally impressive performances.

With the multitude of off-road racing taking place this weekend, it feels as if this weekend has seen a considerable reduction in the number of road races taking place. However, that does not mean that I have no results to bring you news from the tarmac.

I’ll start at the Derby 10 Mile race, where Ross Millington’s 48:37 was both a win and course record. It was a good day for his Team New Balance Manchester, as teammate Jip Vastenberg of the Netherlands was the fastest female, her 56:16 also a course record. Millington’s time puts him sixth on the UK rankings for the year.

A good day for the team with wins and course records for @JipVastenburg 56:16 and @ross_millington 48:37 at the @Derby10m and a win for Jonas Raess at the Swiss European XC Trials pic.twitter.com/XcjjUM0xuu

Course records were a theme of the day, as Calum Johnson rewrote the best time of the Heaton Harriers Memorial 10k in Newcastle with 28:26; that time also takes over a minute of the Gateshead Harrier’s lifetime best, previously 29:38 from 2019. A time of 33:29 saw Sonia Samuels record a convincing victory also, her fastest time over the distance in four years.

Moving to London and Simon Williams (36:27) and Annie Arnold (39:02) can call themselves winners of the Regents Park 10k thanks to a race organised by Nice Work. The EDF Lydd 10k 2021, definitely not in the capital but much further south (the southernmost town in Kent, to be precise), went to Marshall Smith (31:07) and Louise Rollison (46:34).

Moving northwards to Wisbech in Cambridgeshire, home to not one but two races over 10k this weekend. Firstly, Saturday saw the Piling 10k, where Gary Gregory (34:40) crossed the line nearly a minute clear of second placed Jason Parker, whilst Heather Travis’s 43:50 was the fast female. Fast forwarding 24 hours to the George Mundy 10kand it was the turn of Marcela Gracova (38:31) and Glen Watts (34:14) to take the top spots.

RunThrough continue to provide a steady stream of racing opportunities, with action in three venues this week. The Alton Towers Half Marathon saw Natalie Lawrence (84:46) and Michael Roderick (72:38) take wins on Sunday, whilst Saturday’s 10k went to Benjamin Goodfellow (33:17) and triathlon star Lucy Charles-Barclay (35:47). The 5k races, also on Saturday, were won by Diane Mercer (17:47) and Matthew Beacock (17:32).

Racing also returned to the fast Battersea Park on Saturday, where Ben Leaman recorded a significant win (31:17), finishing precisely 90 seconds ahead of the rest of the field. Georgia Holden was the first female across the line, her margin of victory even more impressive at over three minutes thanks to her 36:25.