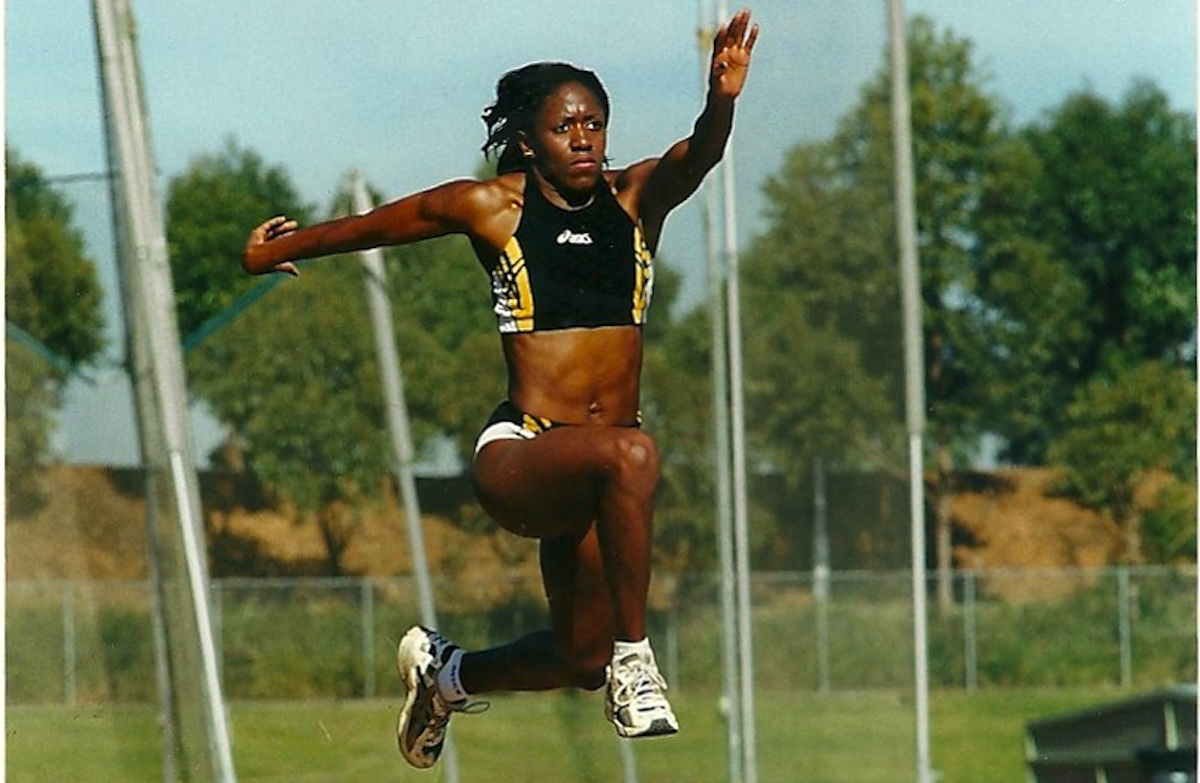 Since winning bronze at the 1998 Commonwealth Games, Connie Henry has gone on to found her own Track Academy and been awarded an MBE. She recounts her story to Paul Zanon…

The award winning triple jumper entered the world of athletics relatively late. She explained. “I was born in Kilburn, went to school in Colindale and was raised by a single parent. My mum worked about three jobs to keep things going, so my homelife is what you would call functional. School was a haven for me, but it was at the age of 15 when my true family started. I walked onto the track at Willesden Sports Centre and that day changed my life.

“I met my coach Dave Johnson, who became ‘in loco parentis’ to me. I introduced myself to him on the track and he asked, ‘What do you do?’ I said, ‘I’m a long jumper and hurdler.’ He said, ‘Okay. Let’s have a look.’ He puts some hurdles out and said, ‘Go over the hurdles.’ I gave it my best shot and he said, ‘Let’s see you jump now.’ I went over to the long jump pit and did my best ever jump. Before I even landed in the sand, he shouted, ‘You’re a long jumper,’ and walked off.”

Despite winning silver and then bronze at the AAA Championships in 1992 and 1996, the hop, skip and jump was not officially recognised for women. Henry explained. “When I started at 15, women were not allowed to triple jump or pole vault. Up until that point I was recognised as a long jumper. The training between long jumping and triple jumping isn’t too dissimilar, so when the rules changed in 1996, all of the first triple jumpers in the world would have been long jumpers. After my first ever triple jump indoor competition, I was ranked fourth or fifth in the country. I remember my coach Dave telling me, ‘Yeah. Now you’re a triple jumper.’”

A leap of faith

In an effort to maximise her potential, Henry took a leap of faith of in 1997. “I was coached by Frank Attoh but made the decision to leave the UK and live and train full time in Australia under Keith Connor. Between 1997-1998 I made huge improvements as an athlete and when I came back to compete in 1998, it turned into a very big season for me.”

That year certainly proved to be fruitful. Henry won the AAAs, then set a personal best of 13.95m before winning bronze at the Commonwealth Games in Kuala Lumpur with a jump of 13.94m. Henry added. “By the time I left Oz in 1998, I had set the Australian allcomers triple jump record [13.86m], so I knew I was in good shape. I had a devastating European Championships and didn’t compete well, which gave me real motivation at the Commonwealth Games. I promised myself I wasn’t leaving without a medal. It wasn’t the colour I wanted, but I got a medal.”

The longevity of any athlete is relatively short. Henry recalled the moment she realised her time was up. “After 1998 I worked to get into the 1999 World Championships, which I didn’t achieve. The year after was Olympic year, which you can never quit on, because that’s what every athlete dreams of. I went back to Australia to start training and find my form, which I never did. Then in 2000 I had an opportunity to work at the Olympic Games in Sydney in media. At that point I was still an athlete, so considering whether to train for the World Championships.

“Then I had a day which changed everything. I was watching Kathy Freeman running in her full body suit and saw her take off and hit the top bend, pretty standard, then saw her run the back straight, once again pretty standard. Then I saw her coming off the bottom bend and into the home straight. When she came off that bend, she lifted her hips another inch and drove herself home to the finish. I watched her cross the line and a little voice in my head told me, ‘It’s over’. That was the wake-up call that made me realise I’d dragged as much as I could out of my body. When I came home, I resigned from British Athletics.”

With the world of competition behind her, Henry chose a new career path. “I decided to pursue journalism and applied to a training programme at the BBC and also a voluntary role at The Voice newspaper. One of my first assignments was a press conference, for a heavyweight boxer called Danny Williams, promoted by Frank Warren. This was shortly after the 2000 Olympics and Audley Harrison was a big name, having won gold [at superheavyweight]. Audley was a semi-friend of mine and Frank started talking about him, saying he wasn’t anything special. I started to get a bit offended and ended up arguing with Frank instead of asking him questions like a reporter should. After, I felt embarrassed and was packing up getting ready to leave, when Frank asked who I was. He then said, ‘What are you doing now?’ I said, ‘I’m going home.’ He said, ‘No. Come to lunch.’ He asked about my ambitions and said, ‘Come and work for me.’ That was it for the next seven years.

Henry recalled a particular episode with Warren that influenced her mindset for life. “One day I sent Frank a text and said, ‘I’m feeling really low. What do you do when everything around you is telling you ‘no’, and it just feels like it’s never going to happen for you?’ One word came back instantly in capital letters. FIGHT. It was none of this appeasement stuff. There was no stepping back. It was step forward and fight. That moment and word was emblazoned in my brain for the rest of my life.” In 2007 the ‘Track Academy by Connie Henry,’ was launched. The Commonwealth medallist explained how the organisation came to fruition. “The sports centre I first went to when I was 15 had been knocked down and rebuilt in 2007. I was headhunted to come and get back that atmosphere and buzz of track and field. I was happy to do so alongside my broadcasting career, but it was a short term vision for me at that point.

“The children coming to the sports centre were doing some running and jumping, but they came with such deeper issues. It became morally unacceptable to just ignore these kids, let them run and chat and go home with their problems. I spoke with Clarence Callender, a great coach and person, and within no time we found ourselves more and more talking in schools and homes explaining to teachers and parents how we could help these children via the academy. So, we naturally began to mentor the kids.” Since Henry’s involvement and leadership, the Track Academy has grown from an organisation with an income of £30,000 per annum to about £250,000 with a team of over 20. In June 2022, Henry was awarded an MBE for charitable services to young people through sports and education.

“The beauty of the Track Academy is twofold. You might just want to try athletics or simply have a bit of fun,” she added. “Not everyone who comes to us has to have some kind of disfunction. Whatever their circumstances are, most stay because they’ve found a family 52 weeks of the year, come snow, rain or shine. Some kids come to us, turn their lives around and do incredible things with their lives. Sometimes they don’t. The life skills we teach help to make them realise that they are more than the person they have been born into.”

Paul Zanon is an award winning sports journalist. He has written eight books, with almost all of them reaching the number-one bestselling spot in their respective categories on Amazon. He has co-hosted boxing shows on Talk Sport and has been a pundit on London Live Boxnation.  He is a regular contributor to Boxing Monthly and a number of other publications. Paul is member of the British Boxing Writers Club. Paul is the author of The Ghost of Johnny Tapia, published by Hamilcar Publications. Connect with Paul on Twitter.