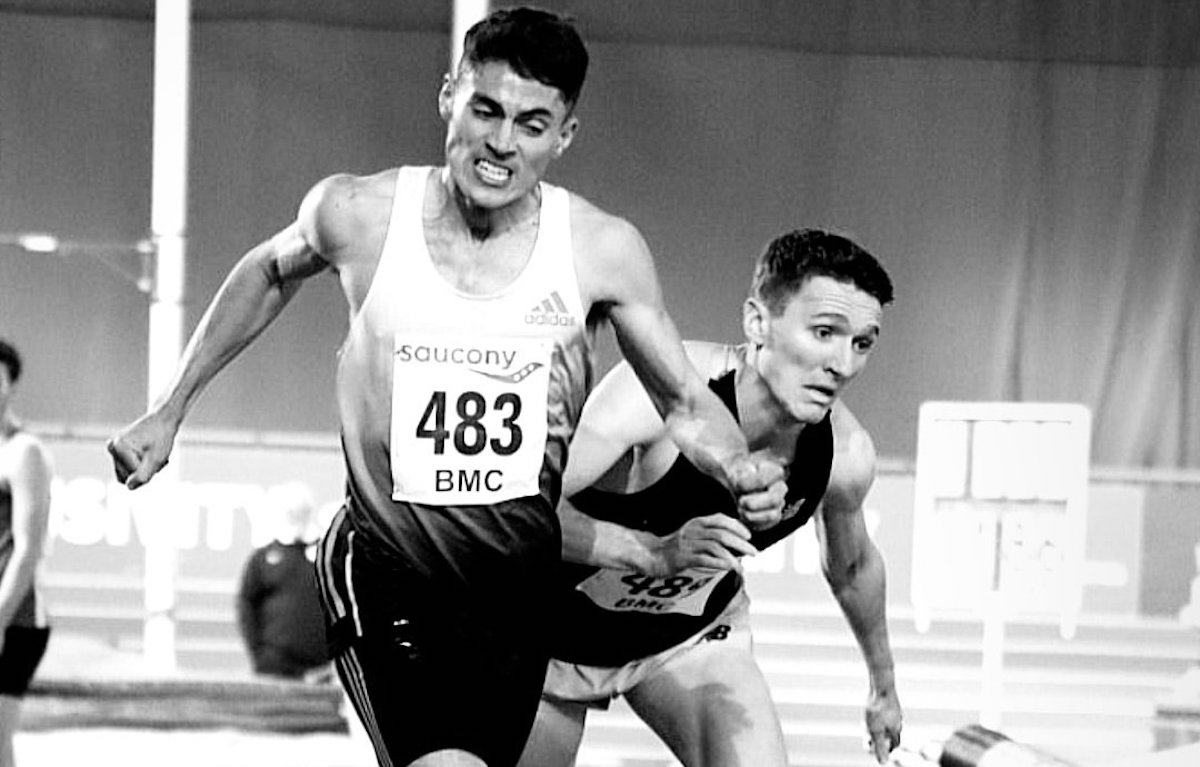 Roads, cross country, trails and track, this weekend had it all. Let’s crack straight into it.

I start with a caveat. There were in the region of 30 county championships taking place this week, each with a varying level of technology to record and upload results. Naturally, that means details were not available from all events at the time I write this. If I’ve missed you off, please know it wasn’t intentional!

Despite a fall mid-race, Dom Nolan (39:39) finished strongly to take his first Surrey Championships title for Croydon Harriers at their home venue of Lloyd Park. A course known for its challenging conditions after any rainfall did not prove an insurmountable challenge for Hercules Wimbledon’s Fred Slemeck (39:56) and Sam Eglen of AFD(40:02) who completed the senior men’s podium. It was a close fought finish in a senior women’s race that saw AFD’s Nancy Scott (30:03) finish just five seconds faster than Suzie Monk of Guildford & Godalming (30:08), with Sutton & District’s Dominique Corradi (30:34) third.

Across the county border, it was a good day for Tonbridge at the Kent Championships at Brands Hatch, with clear wins for Phoebe Barker and James Kingston. Barker built up a 90 second advantage over the 8km course to finish (31:33) clear of Cambridge Harrier Kate Curran (33:05) and Lucy Elms (33:43) of Kent, whilst two of the podium spots in the senior men’s race went to Tonbridge, with Kingston (39:33) finishing a minute ahead of Ashford’s Marshall Smith (40:41) and his clubmate Alexander Howard (41:01).

Witton Park in Blackburn played host to a home win for Blackburn Harriers’ Daniel Bebbington (31:46) in the senior men’s race of the Lancashire Championships in a race with the top three completed by Chris Livesey of Salford Harriers (32:25) and Liverpool Pembroke & Sefton Harrier Ross Harrison (32:46). Having finished third at last year’s edition, it was a gold medal winning run for Ruth Jones of Salford Harriers (24:02) over the 6.7k course, running away from Keswick’s Nichola Jackson (24:25) and Phoebe Hayashi of Lancaster & Morecombe (24:32) in second and third respectively.

Running as a guest / non-scorer, Matthew Rees of Swansea Harriers was first in the senior men’s race at the Gloucestershire Championships at Cotswold Farm Park (32:28), followed by Craig Williams (32:58), another non-scorer, and Rob Green of CLC Striders (33:04). U20 athlete Westbury Harrier Tilly Spinney (24:36) took the ladies title ahead of Cheltenham & County Harriers duo Ciara Thornley (24:47) and Nicole Frith (25:25).

Border Harriers dominated the senior men’s race of the Cumbria Championships held at Hunter Hall School in Penrith, taking four of the first five spots. They were led home by Scott Nutter (36:12), with teammate Tom Humphries third (37:40) and Kewsick’s John Battrick second (37:35). One of the largest XC winning margins of the weekend went to Scout Adkin of Ambleside, taking the senior women’s title by over three minutes (31:01) from Rachel Brown (34:06) and Sophie Likeman (34:37).

Racing over approximately 7k, Hannah Lucas of Bury (26:59) got the better of clubmate Sophie Whittaker (27:14) and Rachel Bailey from Bolton United Harriers (29:09) to take the senior women’s title at the Greater Manchester Championships in Bolton, with the men’s top three, raced over 10k, going to Joe Steward (Salford Harriers, 31:47), Alex Lawton (Sale Harriers Manchester, 33:22) and Benjamin Coop (Bury, 33:50). Joe even had time for a swim in the rather large puddle traversed by the field. There were wins for Callum Bowen-Jones (32:20) and Jo Andrews (38:48) in the respective senior races the Norfolk Championships at Earlham Park.

Moving to the Hampshire Championships at Fairthorne Manor, it was the turn of Tom Sycklemoore from Basingstoke & Mid Hants (35:22 over an 11.8k course) and Helen Hall of Winchester (28:26 over a 8.15k) course to claim the respective senior titles. Southampton’s Sam Costley (35:40), Benjamin Willis of Bracknell (35:44), India Lee from Winchester (29:13) and Guernsey’s Natalie Whitty (29:17) completed the two podiums.

Herts Phoenix and Shaftesbury Barnet took the top two spots in the senior women’s and men’s races respectively at the Hertfordshire Championships held at Cassiobury Park in Watford, thanks to Elizabeth Janes (28:07) and Mark Pearce (37:49) taking gold and Annabel Gummow (28:28) and Tom Butler (37:57) silver. There were third place finishers for Garden City Runners’ Lizzie Parry (30:11) and Oscar Bell (39:12) of Herts Phoenix.

Phillipa Williams (Hallamshire Harriers, 31:12) moved away from the rest of the field at the Yorkshire Championships at Lightwater Valley Theme Park to cross the line over a minute ahead of Leeds City duo Jemima Elgood (32:27) and Georgia Malir (32:48), with Leeds City also taking second and third in the men’s race thanks to Josh Dickinson (35:28) and Graham Rush (35:39), the pair finishing behind City of York’s Angus McMillan (34:47).

Plenty on the Roads

In a weekend with plenty of 10k races taking place both on the roads and trails, I’ve tried to highlight some of the fastest performances in the first instance. Steeplechase specialist Daniel Eckersley (32:24) and Rachel Wiseman (34:48) started their 2023 with excellent performances at the Mornington Chasers Regent’s Park 10k in London, with a 29 second margin for William Boutwood (31:29) at the Stubbington Green 10k, whilst Cassie Thorp (34:50) finished an even more impressive 90 seconds ahead of Rebecca Lord (36:29).

There were two Nice Work organised races this weekend, in Northamptonshire and London. Joanna Male (17:56) was the quickest of the field at the Oundle New Year 5k, with Ross Brown (18:42) the fastest male. Doubling in distance, it was the turn of Phil Martin (33:30) and Alice Brear Clarkson (38:31) to record the quickest times over 10k. In the scenic settings of Richmond Park, the first place positions went to Ben Ruddle (38:37) and Freya Macken (47:36) in the Richmond New Year 10k and Amy Valentin (24:47) and Curtis Evelyn (19:4) in the associated 5k.

This weekend saw the first tranche of races organised by RunThrough. On Saturday, Birchfield Harrier Jason Bennett (32:10) took a convincing win by over three minutes at the Tatton 10k, with Carla Green of North Wales Road Runners the fastest female (41:09). In the capital, just five seconds separated Nick Bester (68:11) from Jon Collier (68:16) at the Battersea Half Marathon, the latter setting a significant PB in the process. Rhys Doherty (70:25) was third. It was a clear-cut victory for Carmen Smid amongst the women racing, albeit with no evidence of her on Power of 10 I can’t tell you how it relates to prior performances. Her clocking of 87:28 saw her cross the line over three minutes ahead of Miyuki Okubo (91:04) and Lily Bridgwood (91:16).

There was home success at the Central Lancashire New Year Half Marathon as Fylde Coast Runners’ Belinda Houghton (84:25) took victory alongside Brandon Quinton (68:41) in what I believe is his debut at the distance. Margins of over two minutes secured victories for Liza Bradshaw (88:50) ahead of the second placed Fiona Toff (91:42) and Nicholas Barry (70:10) over Stuart Donnachie (73:33) in the North Lakes Half Marathon.

Former international steeplechaser Hatti Archer, silver medalist at the 2010 European Championships and fifth on the UK rankings for the discipline, appears to be making a welcome return to racing and returned to winning ways at the No Walk in the Park 5k organised by North Derbyshire Running Club (18:24). Charles Bell (17:13) was the fastest amongst the men racing.

The January event in the Weston Prom Race Series, raced over five miles, went to Kieron Summers (27:15) and Kelly Dicks (30:55).

Yorkshire played host to the Harewood House Trail Races on Saturday, with athletes able to choose from a half marathon, 10k or 5k. The longest race of the day saw a victory for Lauren Conway (84:01) over 13.1 miles, with Robert Liddell (84:22) the fastest male. The 5k races were won by Joanne Biltcliffe (23:54), finishing third overall, and Darren Baker (23:21). The 10k results suggest Jess Richardson completed the course in a storming 31:30; however, given that would be the tenth fastest by a Brit in history on the roads, plus the fastest performances across the other distances, I am going to hazard a guess this is incorrect (possibly a 5k runner). In which case, Aidan King (37:36) and Colleen Fotherby (44:06) recorded the fastest times.

Staying on the trails, Tom Rehal (38:08) finished over five minutes clear of the rest of the field at Essex Trail Events’ Rayne Trophy Trail, with Shukila Jordan (50:34) the fastest female and third overall. Located to the north east of Glasgow, the Lenzie Jog covers approximately 9km off-road, with Andrew Joyce (31:14) and Victoria Black (39:21) taking wins.

Given the weather of the past few days, maybe it is preferable to race indoors. That was certainly the case for Phil Sesemann at the British Milers Club meeting in Sheffield, as he pipped 1500m World Champion Jake Wightman on the line of a thrilling 3000m, clocking 7:54:34 to Wightman’s 7:54:58. Charles Wheeler (7:57.06) set a lifetime best in third. A solo run from Hannah Nuttall in the women’s race saw her rewarded with a 8:53.63 clocking and PB.

The highlight of the meeting, however, may have been an outright PB and European Indoor Championships Q for Issy Boffey (2:00.99) over 800m in a solo effort without a pacemaker. As the UKA policy requires athletes to show fitness by running standards in 2023, she becomes the first athlete to have a Q mark in the correct time period for Istanbul.