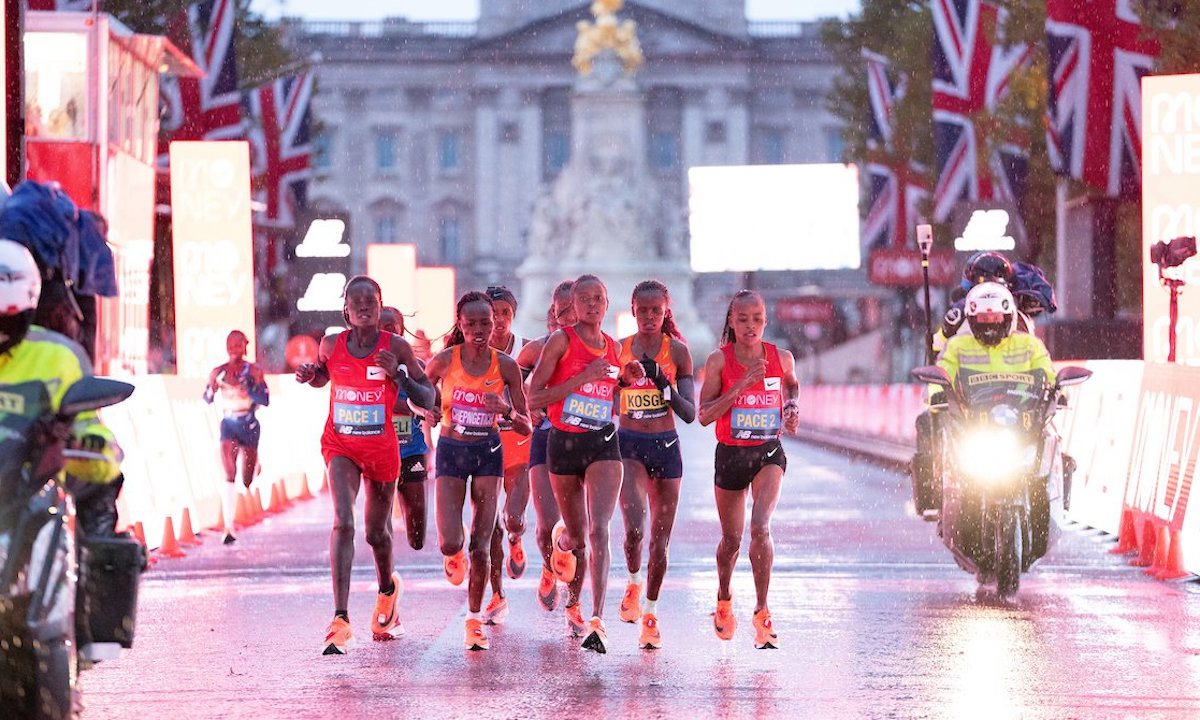 This weekend all eyes were on the marathon distance, specifically, The London Marathon. Athletes took part in the 40th and incredibly unique year of the event in search of PB’s, Olympic qualifying standards and British titles. Despite all the intense organisation that went into ensuring the race was covid secure, no level of organisation could hold off the typically wet British weather!

The London Marathon; considered a running event like no other that usually sees thousands upon thousands of people take to the streets of London, some in search of fast times or to raise money for charities close to their heart, others to cheer on those tackling the distance. However, in incredibly unique circumstances, The Cutty Sark, Tower Bridge and even Big Ben were all cut out of the course as elite athletes, from all over the globe, took to the streets around St. James’ Park to battle it out over the 26.2-mile distance.

In addition to the lack of monuments along the way, spectators and non-elite runners were forbidden from attending and asked to watch/run from home. Despite the lack of people there on the day, the virtual set up saw thousands of people, all over the world, take on their own marathons in order to raise money for some well-deserved charities.

The Best of British marathon running.

Around 19.6 laps of the 2.15km loop course, the elite women were the first to take to the roads at 7:15am. This event saw some of British marathon racing’s best elite women, consisting of Steph Twell, Lily Partridge, Tracy Barlow, Natasha Cockram, Tish Jones, Helen Davies and Naomi Mitchell, toe the line together.

Outside of the British field, it was world record holder, Brigid Kosgei, who battled it out for the win against world champion, Ruth Chepngetich, with Sara Hall running alone slightly behind. The athletes set out with intent and at the halfway point, which they reached in 68:15, they were still within the women’s only record time (2:17.01). As the field spread out, the medal positions became less certain. It was clear that Kosgei would take the win, and that she did, in an incredible 2:18.58. Whilst quite some way off of her best, she took a clear win and gave a solid run in tricky conditions.

The following medal positions took us all by surprise and were only decided in the finishing straight. World champion, Chepngetich appeared to be running on empty and it was in the final 150m that South Africa’s Sara Hall had an astonishing race, giving it her all (as shown by her grit) to overtake the champion and claim the silver medal position in 2:22.01. Thus, Chepngetich settled for third place (2:22.05).

🇬🇧 Natasha Cockram wins the battle of the Brits at the #LondonMarathon

Heading into the race, it was self-coached athlete, Steph Twell, who had the fastest PB on paper, of 2:26.40, which she set in Frankfurt last year. However, the field took us all by surprise, as the conditions meant it was anyone’s race. After pulling out around the halfway mark, due to an injury she has been battling, Steph Twell chose to call it a day. She gave a gutsy race, but it was evident that she wasn’t comfortable.

Going into the final quarter of the race, after Naomi Mitchell (Reading AC) pushed into the lead, Lily Partridge too decided that her marathon race needed to come to an early end as she struggled with the cold conditions. However, at this point, current British leaders Naomi Mitchell and Natasha Cockram had already pushed on in the tough conditions and Barlow was moving into third place.

As the race unfurled it was a battle between Cockram and Mitchell, but in the end Cockram had the slight edge. On what looked like very tired legs, Natasha Cockram, Welsh record holder, crossed the line to crown herself British Marathon Champion in 2:33.19, and place 13th overall! Just five seconds behind her, in 2:33.24, a massive personal best by over four minutes was Noami Mitchell.

Mitchell ran what can only be described as the race of her life to secure the silver medal. Tracy Barlow gave a strong race to claim 15th position and third Brit in 2:34.42 after putting up with torrential downpours at some points of the race, making up some ground on Cockram and Mitchell on the final lap. Tish Jones (Belgrave Harriers) came home in 2:36.25.

In the men’s race, after the initial Kipchoge versus Bekele battle was off as Bekele withdrew due to injury, it was ‘assumed’ that Kipchoge would take the win. However, from the start, it was clear ALL podium positions were up for grabs by any of the impressive field as Kipchoge was faced with a bad day at the office. The British men’s start list, alike the women’s, was a very stacked one, including Ben Connor, Johnny Mellor, Chris Thompson, Fast10 runner Jack Gray and Ollie Lockley.

With 15 minutes to go, Kipchoge was no longer in contention for the win. As the lead group drew further ahead, it was down to a group of 6. It was just in the final 500m that three athletes pushed on, taking on the battle in style of a track race. Down the home straight, Shura Kitata and Vincent Kipchumba were stride on stride as they dug deep and strove for the finish line, but it was Kitata that had that little bit of extra strength over Kipchumba and took the win in 2:05.41 and 2:05.42 respectively. Third place was claimed by Sisay Lemma as he dropped off in the final 200m.

The Brits, being paced by Sir Mo Farah in the second group, managed to stay together for a large part of the race. Working closely alongside one another, battling through the tough rain and wind, the leading British males went through the halfway mark in 1:05.18. As the race progressed, it became clear Connor and Mellor were the best of the Brits on the day.

Using each other to push for the line, it was Mellor who came out on top, charging ahead of Connor in the final lap. Mellor (Liverpool AC), who already has an Olympic qualifying time, crowned himself British Champion, crossing the line in 2:10.38, once again within the QT. Ben Connor (Derby AC) who made his marathon debut, was openly in search of that Olympic time. The New Balance athlete didn’t disappoint as he stumbled across the finish in 2:11.20, 10 seconds inside the required Olympic standard.

Third Brit to run through the finish banner was Swansea’s Josh Griffiths in a new best time! Griffiths knocked over a minute off of his previous time, running an impressive 2:13.11. Fourth Brit, in 19th overall, was marathon master, Chris Thompson (AFD), in 2:13.32. Charlie Hulson followed just seconds behind Thomspon with a solid 2:13.34, also a rapid best time. Next Brit in his second ever marathon was Southend’s Adam Hickey in 2:17.38.

Making their marathon debuts were some more of GB’s greatest distance athletes. Josh Lunn of Bedford & County was among these to tackle his first 26.2-mile event. Lunn secured an impressive debut time of 2:17.59 for 7th Brit and 25th overall. 8th Brit and multiple Isle of Man record holder, Ollie Lockley did himself proud in his second marathon. Lockley, who boasts a half PB of 63:01 stopped the clock on 2:19.40, a whopping almost 5-minutes fastest than his previous time in 2017. This also breaks the 47-year old IOM record!

Paul Martelletti of GB, who has become a master of the ultra-distances finished behind Lockley in 2:20.02. 10th placing Brit was the phenomenal Jack Gray of C&C who, alike Lockley, also made his marathon debut. Gray, who battled with injury a few weeks back, proved his determination by clocking 2:20.26.

More in our Irish roundup but a word here too for Steve Scullion who had a stunning race clocking 2:09:49 looking serene and running a large part of the race solo.

In the wheelchair event, yet another win was uncertain. Unfortunately for the eight-time winner, David Weir, the opportunity to win his ninth title was taken from him by Canada’s Brent Lakatos. Weir said, ‘It was very tough conditions… I knew it would be a sprinter’s race. I knew Brent Lakatos would be the strongest over the sprints.’

The winner of the women’s race was won by Nikita Den Boer, and sadly for Britain’s Shelly Woods, two-time champion who was racing London for the first time in four years since the birth of her son, had to drop out.

Battling conditions the theme of the day.

Also in London, over the slightly shorter distance was the Queen Elizabeth Park 10k. Taking the win was John Henry in 35:14 and Gabriella Moriarty in 38:11.

In yet again brutal weather, the open and windy Dorney Lake Marathon saw some determined and tough runners grind it out. Will Mackay of Bedford & County AC secured himself the win with a time of 2:26:14. A minute behind in second place was Jack Blaiklock of Thames Hare & Hounds in 2:27:17 followed by Chris Richardson (Metro Aberdeen) in 2:27:41.

Sara Willhoit (Shrewsbury AC) was the first woman to run across the finishing line in 2:49:30, an impressive 4-minute lifetime best. Second woman was Jessica Welborn (Serpentine) in 2:51:31 and third place went to Anna Hollingworth in 2:54:21.

Away from London, was the Isle of Wight Marathon. The event saw Ross Skelton take the win in 2:28:30, an impressive 7-minutes faster than the previous record. It also saw Skelton have a major negative split, going through the second half in 71 minutes, in what Terry Skelton described as ‘some of the worst conditions I’ve ever seen!’. Further results weren’t published at time of writing.

On the track, in the last open meeting of the season run by Harrow AC, was a mile and 3k open meet. In the 3,000m event, there was a world record attempt by David Clarke, adding extra excitement to the event! Clarke chased after the M60 record which stands at 9:29.47. Finishing with a time of 9:34.65, Clarke narrowly missed on achieving the record, however it is obvious the ability is there, and it is only a matter of time! Good luck David! For the mile distance, the overall win went to Mukhtar Musa who clocked 4:22.42 over the line. Joseph Chamberlain had a solid race to come in second place in 4:28.80. It was Louis Hodge who took third in 4:31.52.

On the women’s podium it was teenage domination as two U15 athletes claimed the top two finishing spots. Francesca Baxter took the win with 5:21.12 ahead of Maddie Hughes in 5:23.25. Running the third fastest time was Lucy Henson with a time of 5:31.08.