Brits fly in the US and domestic racing returns – weekend roundup 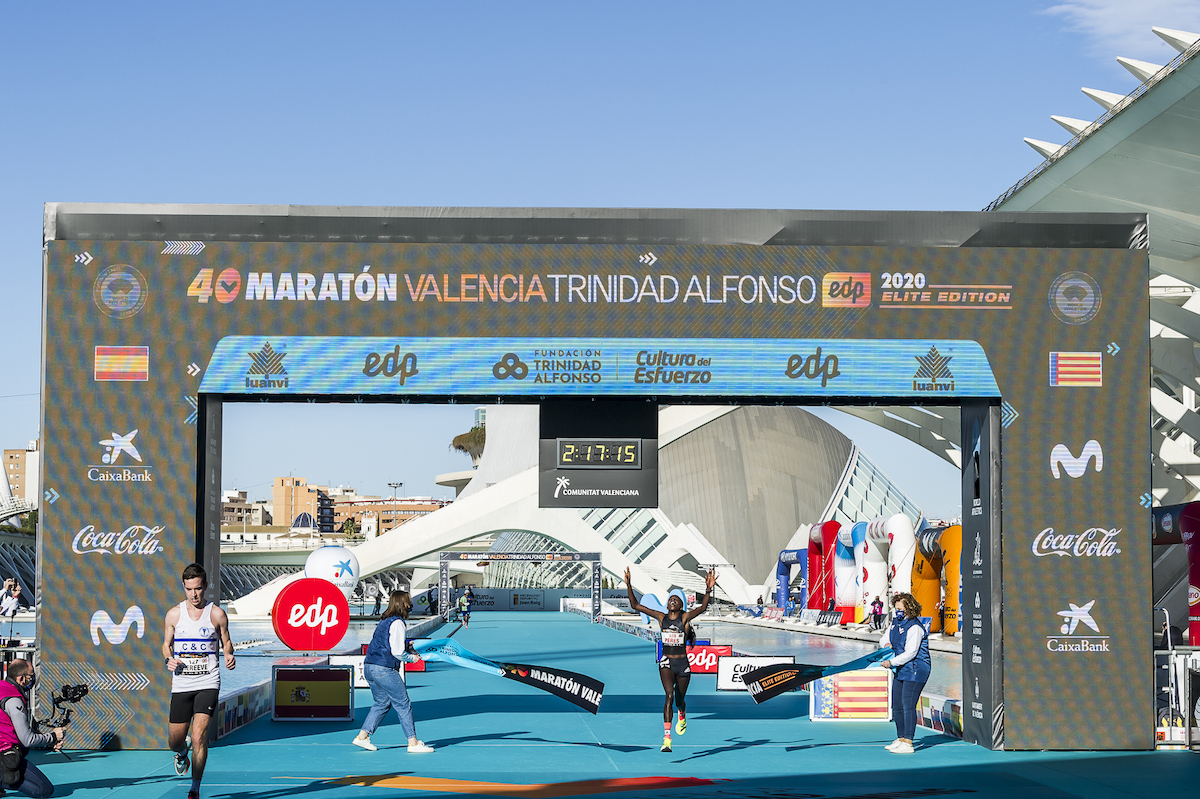 After another month of quiet on the racing scene, I am delighted to bring you a roundup of some real-life racing once again! There were some phenomenal performances by Brits abroad, as well as some home successes. One thing was for certain, people were just over the moon to be back racing, and it showed!

In the US, plenty of athletes showed the sheer quality of British runners. The Yorkshire athlete, now based in Seattle, Tom Anderson, had a smashing performance in San Juan at The Track Meet and even came out with a shiny new PB. He improved his previous 5,000m best of 14:15, by a huge 41 seconds to stop the clock on 13:34.05.

Anderson came third in the Men’s sub 13:30 race, less than 2 seconds behind the winner, Matt Centrowitz. The British success didn’t stop there. Representing Tonbridge AC was Chris Olley. In what was his first race in months, Olley dipped under the 14-minute mark to run an impressive 13:42 in LA. Milton Keynes athlete, Jack Meijer, finished just behind Olley in 13:44 for 11th place.

Records continued to fall in America by the Irish at the same event. Roisin Flanagan had an astonishing run for Adam’s State University to clock 15:38.27 for the 5000m. According to PO10 this was her first official race over that track distance, and she managed to shave 12 seconds off Emma Mitchell’s 3.5 year old record. Roisin was not the only Irish athlete within the record time. Her sister, Eilish, ran 15:40.17 to finish just 2 places behind Roisin. A true family affair!

Over double the distance, Brits continued to fly around the track to secure fast, Olympic qualifying times. GB’s Sam Atkin came in 4th in the men’s 10,000m. He ran an astonishing 27:26.58, sneaking inside the 27:28 Olympic barrier, and only 24 hours after having run 13:18 over 5,000m. This puts him 4th on the UK all-time list after Mo Farah, Jon Brown and Eamonn Martin. Atkin is definitely one to watch on the GB team as he prepares for Tokyo 2021.

Over at Valencia Marathon the race was billed as one of the fastest line ups in marathon history. Whilst there were some key successes, others found the lack of racing a shock to the system and weren’t quite able to execute their plans as they had hoped. Leading it in for the Brits was Staffordshire’s Matt Clowes. Not quite a PB time, but after feeling the struggle in the last 5km, he managed to hang on and come out with a time of 2:15:46.

Second GB runner was Norman Shreeve of Cambridge & Coleridge. In what was his first marathon in 3 years, the C&C athlete chopped his PB down significantly from 2:37:23 to a phenomenal 2:17:14. A 20 minute improvement! Representing Ireland was Gary O’Hanlon who crossed the link in 2:19:06 and the final Brit across the line was Paul Martelletti in 2:19:56. Also representing the Irish flag was female athlete, Ann-Marie McGlynn who finished in a strong 2:35:31. After battling with a Tibialis Anterior tear 3 weeks ago, Derek Hawkins was unable to finish. Peter LeGrice and Scott Overall also faced difficulties in the race that meant they were able to cross the line. We wish them all the best and hope they are back fighting fit soon. Full details on the races in Valencia can be found in this article.

Scottish Masters Athlete of 2020, Terrigal Trotter & Umina GP Joasia Zakrzewski today finished the Coast2Kosci, a 240k run from the beach at Eden to the top of Mt. Kosciusko (& back down to Charlotte’s Pass). 3rd place overall & 1st female & a new ladies Course Record of 28:18:53 pic.twitter.com/3PskmkRHNH

Pushing up the distance in the Australian Coast2Kosci was Joasia Zakrzewski. The event sees athletes span 240km from Boydtown Beach to Mount Kosciuszko, the highest peak in Australia. It is for those brave enough to tackle the testing course which is an uphill course along dirt and sealed roads.

It passes through forest, countryside and the alpine region of Mt Kosciusko National Park in the heart of Australia’s ski fields. Zakrzewski did not disappoint as she went out to break the course record and did just that! Not only did she break it, she smashed it. She broke the 7-year old record (30:04:28) by almost 2 hours in a time of 28:18:59.

Back on British soil

Proving the immense depth of talent in the British racing scene was the Remembrance Herts event. The top three finishers in the men’s race all dipped under the 30-minute barrier! Taking home the win, in the fastest time on the day was Ryan Burling. The Marshall Milton Keynes athlete shaved 1 minute and 20 seconds off of his personal best. Burling crossed the line in 29:49, for his first ever sub-30 10k. Just 5 seconds behind Burling was Thomas Frith (Southend) in 29:54. This is also a new PB by 23 seconds. Timothy Lefroy (MK Distance Project) came in third in 29:58.

The women’s podium consisted of another three high quality performances. Taking home the gold medal position, in 35:36, was Marshall Milton Keynes runner, Elle Roche. This bizarre year has clearly treated Roche well as that was just of 2-minutes faster than her previous best time. Roche’s teammate Alice Ritchie joined her in setting a personal best. Ritchie took 50 seconds of her previous time and clocked 36:05. In third place was Hannah Wardley in 38:49.

At home in the UK, racing was back up and ‘running’ following the end of the second lockdown. The Running Grand Prix at Goodwood Motor Circuit saw the fast times continue to flourish.

Sadly the 5km was 400m short by roughly 400m but taking the win for the women was Holly Dixon who clocked 15:08 with an impressive lead. Grace Copeland who goes from strength to strength in her comeback from injury came in second in 15:40. Georgia Perfrement was the third female across the line in 15:54. Joe Croft claimed the men’s win as he crossed the line in 13:53. Second place was secured by Sam Tyas in 14:04 ahead of Ben Brown in 14:10.

In the 10k Dean Crump earned the win. His chip time wasn’t accurate, but his gun time was a speedy 30:16. The rest of the podium saw Guildford and Godalming domination occur. George Dollner had a strong run, getting ever closer to that 31-minute mark. Dollner ran 31:08 for second place. Third place finisher was club mate Tom Foster in 31:54.

Following on from her London Marathon success where she was the second Brit across the line, Naomi Mitchell (Reading AC) took on the shorter 10k distance. Mitchell ran 34:47 for a convincing win. Second athlete to cross the line was Helen Hall in 35:58. Emily Proto was third with a cracking 36:25.

Going up the distance in the half marathon, some of Britain’s finest distance runners were out in force. After a close race between Ross Skelton and Paul Navesey, it was Skelton who just had the edge to take home the win. Skelton stopped the clock on 1:06:48 followed by Navesey in 1:06:52. In third was Kevin Moore with an impressive 1:07:12.

Also following on from her London Marathon success, it was Tracy Barlow who took the women’s title in the half marathon. Barlow ran 1:18:13 for the win ahead of Alexa King in 01:19:25. The third fastest female at the event was Rebecca Gallop in 01:21:44.

The winners of the marathon were Ewan Cameron who had a spectacular race to clock 2:19:18. Steph McCall (Herne Hill) showed that all her hard work has been truly worth it by clocking 2:45:10 for 26.2 miles, over 6 minutes faster than her previous best!

RunThrough once again put on an impeccably well organised event at Tatton Park. In the 10k, it was Tom Charles who secured himself the win, sprinting through the line in 31:30. Just 13 seconds behind in 31:43 was Karl Darcey. Rounding off the podium by a clear distance ahead of 4th place, in 32:03, was Joshua Birmingham.

The women’s event saw some equally fast girls take to the roads over the 10k distance. Vicki Cronin (Trafford) and Sarah Thomas both recorded equally fast times of 37:56 to the second, however Cronin just took the win with a faster net time. Tracy Rogers came in third in 41:06.

The Queen Elizabeth Olympic park 10k saw Stephen Blake take home the win with a solid 32:05. The women’s win was claimed by Isabel Clark in 36:26. Over the 5k distance, Matthieu Marshall was only just a few seconds off the 16-minute mark. He ran 16:05 for first place. For the women, it was Kija Dee who won the gold medal in 18:13.

The Running Grand Prix at Oulton saw Fast Running’s own Gill Bland (Huncote) take to the roads to test herself over the marathon distance for the first time this year. After what hasn’t been an easy year for anyone, Bland was just 3 seconds off her best time, which she set 4 years ago. Bland ran 2:53:25 to win the women’s race. Second female finisher was Keely Smith with a solid 3:01:24. Katie Ellis completed the podium by running 3:20:12.

Over half the distance, the two winners were Adam Peacock and Georgina Weston of Bromagrove & Redditch and Rotherham respectively. Peacock ran 1:09:08 for a lifetime best by almost 3-minutes. Weston ran 1:25:04 for the half distance. The 10k winners were Byron Edwards (33:19) and Veleska Wills (38:12) and the 5k champions were Ryan Jones (15:03) and Rachael Flynn (21:58).