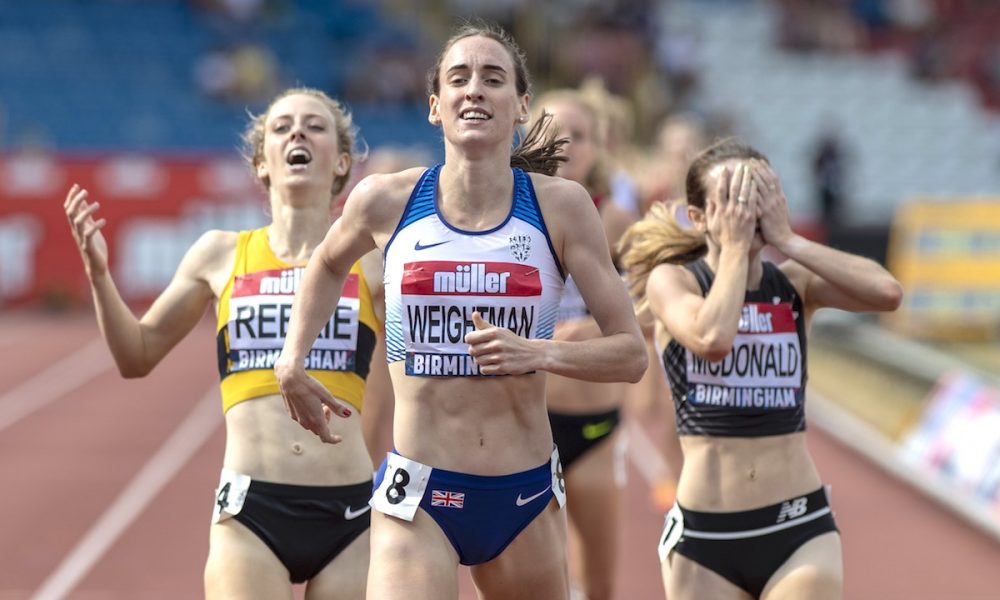 The best in the country will descend on Birmingham this coming weekend as British titles and spots on the Great Britain & Northern Ireland team for the IAAF World Championships are decided.

36 British champions will be crowned across two days of action in Birmingham, with the championships serving as the final major event at the Alexander Stadium before its redevelopment for the 2022 Commonwealth Games and tickets are still available.

Webb and Sharp lead the challenge

Six women have achieve the world 800m standard over the last two months with four lining up this weekend. 2nd on the UK rankings behind Laura Muir this year is Lynsey Sharp clocking 1:58.61 at the Anniversary Games. Alex Bell is in fine form after her PB of 1:59.82 at the same event and they will be challenged by the likes of Shelayna Oskan-Clarke, Hannah Segrave, Mari Smith and Adelle Tracey.

Leading the charge in the men’s 800m is European indoor silver medallist Jamie Webb, with his personal best of 1:44.52 set this year the quickest time produced by a Brit since 2013. With the event seeing eight athletes hold the world qualifying standard however, it is all to play for.

2nd in the UK rankings Kyle Langford will be looking to build on this excellent 1:44.97 PB performance at the Anniversary Games. Webb and Langford will be joined on the start line by the likes of Elliot Giles, Max Burgin and Guy Learmonth.

With only five of the eight qualifiers racing the men’s 800m, the other three missing qualifiers have opted for the 1500m instead. Jake Wightman, Josh Kerr and Charlie Da’Vall Grice all hold the standards over both events, three of five in total who have the world qualifier in the 1500m with all of them racing the distance this weekend. James West and Neil Gourely are the other two men with the times banked.

Just like in the 800m six women have hit the 1500m qualifying mark with Sarah McDonald’s time of 4:00.46 making her the quickest in the field in 2019. With McColgan, Weightman and Courtney running the 5,000m Jemma Reekie is the 2nd fastest athlete in the field this year.

Clarke and Seddon clear favourites in the chase

Elizabeth Bird is likely to be Clarke’s biggest challenger as the only other athlete in the field to have acheieved the world standard. In the men’s race Phil Norman and Jamaine Coleman are 2nd and 3rd ranked in 2019 both within 2 seconds of the world mark.

The women’s 5000m sees international medallists Eilish McColgan , Laura Weightman and Melissa Courtney as the leading trio coming into the event, with five out of the seven in total who have the standard racing. Amy Louise-Neale and Jess Judd being the two other athletes who have hit the mark.

With the likes of Sarah Inglis, Verity Ockenden, Jenny Nesbitt and Hayley Carruthers also lining up its set to be one fo the highlights of the weekend for distance fans.  We will also be keeping a keen eye out for Fast Running’s own Hannah Irwin who is having a fabulous 2019 so far. Andrew Butchart lines up in the 5,000m after clocking 13:06.21 in July. He will be going up against Nick Goolab who will be looking for a strong come back after a disappointing 14:27 at the European Team Championships. Other steong contenders are likely to be 13:21 man Marc Scott, British 10,000m Champion Ben Connor and Sam Atkin who currently sits 6th in the UK rankings.

World Champs places to be finalised

“The Müller British Athletics Championships is one of the stand-out fixtures in the calendar for our sport and holds pivotal importance in the season.

“With places up for grabs in the team for the IAAF World Championships, and also several of the country’s leading para athletes competing here as a crucial part of their preparation for the World Para Athletics Championships in Dubai later in the year, this is set to be a hotly-contested two days of domestic athletics action.

“In regards to engaging the local community, we are also playing host to another Couch to 5k for women only before the action begins on day two (Sunday 25 August) of the championships, with all of those who take part receiving a complimentary ticket to watch Sunday’s action.”

“Finally, we look forward to welcoming both fans and athletes to Birmingham for this bumper weekend of athletics, and once again we are delighted to have the support of BBC once again who are broadcasting the Championships across the network.”