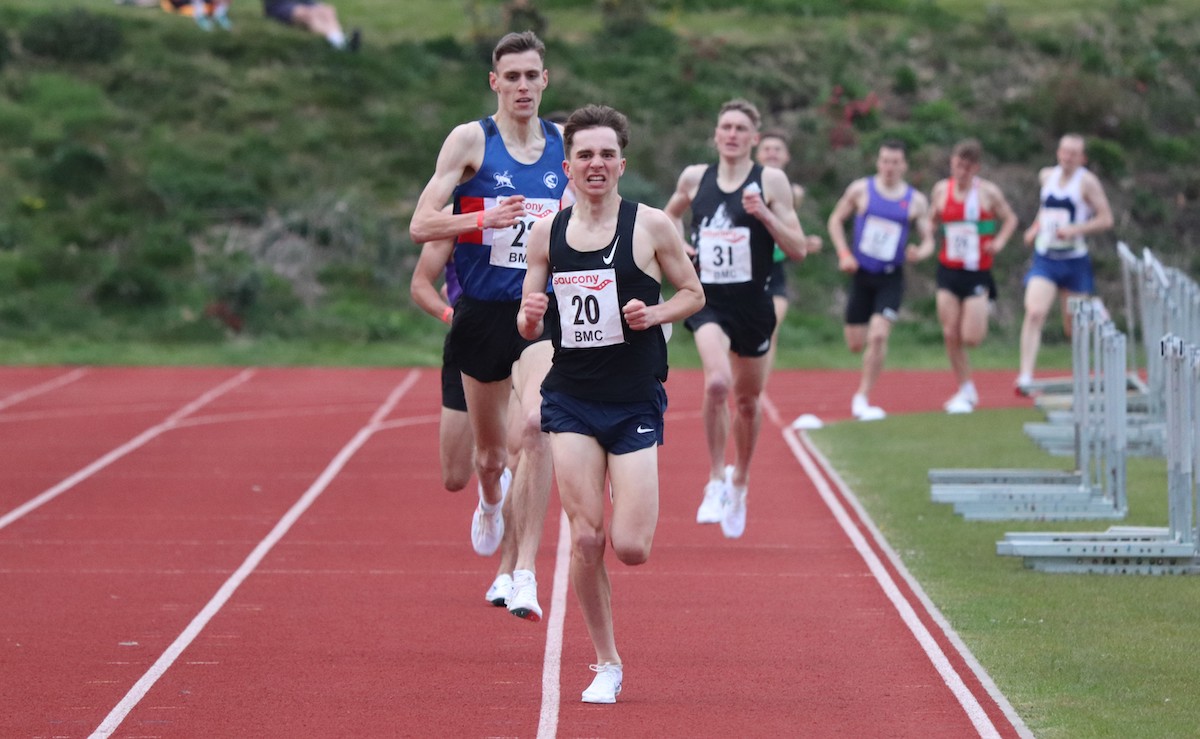 Saturday sees the first of five Saucony British Milers’ Club Grand Prix meetings take place in Trafford on the outskirts of Manchester, James Rhodes brings you a preview of what is set to be an exciting meet

Excellent fields have been compiled for races over distances between 400m and 5000m at a venue that has been hosting BMC meetings for over 40 years. Races are set to run between 16:30 and 21:20 with all the action to be streamed live on Vinco.

It is, of course, the first BMC Grand Prix of this Olympic year. For those who believe in such things, you might be interested to know that in the first Grand Prix of 2012, winners of four of the six events went on to qualify for the London Olympics (Lynsey Sharp, 800m; Laura Weightman, 1500m; Ross Murray, 1500m; and Jo Pavey, 5000m). The other two winners were elite athletes from abroad. Will similar patterns emerge this year?

This is probably the strongest domestic track meeting of the year so far, and to whet your appetite I will take you on a stat-filled run through of some of those expected to be in action and particular times to keep an eye on. I will also be there providing updates on the night via social media (details at the end).

The men’s 5000m may provide the strongest depth of Saturday’s action, with a who’s-who of British middle-distance athletes entered including ten who have run inside 14:00 and two under 13:30.

Based on PBs, Jonathan Davies is the leading entrant thanks to his 13:23.94 best. The Reading / University of Birmingham athlete has a number of accolades on his racing resume, including 2015 European U23 Cross County Champion, silver (5000m) and bronze (1500m) at the 2017 World University Games and 2020 British Indoor Champion over 3000m. His outdoor season got off to a winning start with victory over 3000m on his home track at Birmingham University last month, his 30th appearance at a BMC event. He will be looking to continue the winning trend on Saturday.

Phil Sesemann will be looking to continue his good form from the indoor season which included gaining his first British vest on the track at the European Indoor Championships and three runs under eight minutes for 3000m, including a new 7:51.27 PB. Indeed his outdoor season has started strong with a second-place finish at the BMC’s Gold Standard Race in Birmingham last month (3000m, 7:57.44) and a 13:40 at Podium 5k, just one second outside his 2020 PB. By my count, this will be Phil’s 34th BMC race since his debut back in May 2013 and his eighth time on the Trafford track. Eyes will also be on youngster Henry McLuckie as he targets a World U20 Championships QT. His PB of 13:56.20, set in March at the Comeback 5000, is one second shy of the required time, although almost half a minute inside the European U20 Championships QT. Henry also competed at the BMC’s Gold Standard Races in Birmingham last month where he took the win over 1500m (3:42.71).

Also looking for age-group qualifying times will be U23 athlete Tom Mortimer. His PB (13:43.47, set in taking bronze at last year’s British Championships) is well inside the standard, but outside the time period. His 13:39 at Podium 5k suggests it should be an easily achievable target. Tom is also no stranger to the Trafford track, taking the win over 3000m at last September’s BMC meeting.

I must also add – it is exciting to see Scott Overall entered for a track race! A man best known more recently for his exploits on the road, his 5000m PB was set back in 2008. Indeed, this will be his first race on the track in six years (save for a DNF at the 2019 Night of the 10k PBs) and only his second BMC appearance since 2006. Since then, his career needs no introduction, with highlights incorporating the London Olympics, a host of major marathons (including London, Berlin, Boston and Chicago) and multiple victories on the domestic road racing scene. This year he has taken wins over 10km at Goodwood and Kempton Park, and has the UK lead over the distance by over 20 seconds.

Mick Hill, fresh off his V45 British Record for the distance on the roads, may have his eyes on improving his sixth place on the all-time V45 list on the track, a list topped by Nigel Gates’s 14:42.67 from back in 1998.

There is also considerable depth in the women’s races over 12.5 laps, led by Jenny Nesbitt and Kate Avery who are two of five athletes on the entry list to have broken 16 minutes.

It has been a good couple of months for Cardiff’s Jenny Nesbitt, with victories on the track at the Comeback 5000m in March and the Speedway 10k last weekend (although making it clear on social media she was unhappy with how that race went) alongside a 3000m PB when coming second to Jess Judd at the BMC in Birmingham last month. With a PB less than one second shy of the qualifying standard, eyes may well be on a second Commonwealth Games and the Welsh QT of 15:30.

Another athlete with Commonwealth Games experience is Kate Avery, who finished fourth in the 10,000m in Glasgow in 2014. The Shildon athlete has no shortage of international experience both on the track and cross country, including team wins at the 2013 and 2015 European Cross Country Championships. Kate took a comfortable victory in the BMC’s 3k Road Race at Tameside last month in her season opener, her 31st BMC race having made her debut as an U13 athlete back in 2004. Three others on the entry list have run under 16 minutes; Claire Duck, Louise Small and Mhairi McLennan, all of whom will be opening their track seasons having run 5k on the roads. Scot Mhairi ran an impressive 15:47 at Podium 5k, four seconds faster than her track best, and one would expect her to feature here.

Two Herne Hill Harriers will have their eye on a particular time, with Saskia Millard and Charlotte Alexander looking for European U23 and U20 qualifiers respectively. Saskia’s PB (16:02.03) was set last summer, but she needs to replicate this in 2021. Charlotte meanwhile ran under the 16:40 standard at the Comeback 5000 in March; however, the use of male pacemakers means the run does not count for qualifying purposes.

The women’s 1500m features one of the few international athletes competing with Ireland’s Sarah Healy leading the entrants. Sarah is no stranger to success at the age-group championships, having won gold over both 1500m and 3000m at the 2018 European U18s and silver over 1500m at the European U20s in Boras in 2019. Her PB of 4:09.25 is over a second faster than anyone else entered and is well inside the European U23 qualifying time of 4:14.00.

Revee Walcott-Nolan is also entered and certainly one to watch. Whilst perhaps best known as an 800m runner (with a 2:01.74 PB), she has been experimenting over longer distances in recent weeks, with a 9:09.9 3000m at the Comeback 5000 in March, her first time over her distance since 2012, and a 15:50 on the roads at Podium 5k. This will be Revee’s second 1500m of the season, having run 4:14.88 for second behind Alexandra Bell at Birmingham University last month.

Two athletes will be targeting Championship qualifiers, Erin Wallace (U23) and Emily Williams (U20). Both have PBs inside the respective qualifying times; Erin has a PB of 4:12.57 and was less than one second shy of the 4:14.00 U23 standard during the indoor season. Emily took silver at the 2018 European U18 Championships behind Sarah Healy, and her 2019 PB of 4:16.89 is inside the World and European U20 QTs. However, it will be her first race in 15 months and her first outdoor track race since July 2019.

It will also be interesting to see how Issy Boffey, reigning European U20 Champion over 800m, goes in only her second race over 1500m. Issy is mixing up the distances in the early part of her season and is due to race over 400m next week. Her 4:20.67 PB was set at the 2019 Loughborough International when finishing third behind Dani Chattenton and Rosie Johnson. She’s improved her 800m PB by over two seconds since that race, and so an improvement would be no surprise. Danielle Hodgkinson is the England 1500m Champion and returns to the track after getting over Achilles issues which hampered her training in 2020.

The 1500m entrants are led by U23 athlete Thomas Keen, who has an indoor PB of 3:41.44 set in Vienna last February. The 2018 European U18 Champion over 3000m has spent recent weeks training in Flagstaff, Arizona with Jake Wightman and the race will be his season debut after three indoor races in January and February. He is no stranger to the Trafford track, having finished fourth at this meeting two years ago.

He will be joined by Michael Wilsmore in his first race of 2021 and Rory Leonard, fresh from his 3:45.70 PB last month in Birmingham. The Morpeth and Hoka One One athlete is in good shape after a 13:50.22 at the Comeback 5000, comfortably under the European U23 Championships QT.

It is expected to be a battle of the young guns in the men’s 800m, as U23 athletes Ben Pattison and Alex Botterill head up the field. Both set 1:46 PBs last year, inside the European U23 Championships standard. Ben will be looking to make his third age-groups championships this summer, having taken silver at the last edition of the European U20 Championships and competed over 400m at the European U18s in 2018. He took the win at his last two BMC races (over 800m in Watford in 2019), and Saturday will be his first outing in Trafford.

City of York’s Alex Botterill has made a positive start to the season after taking over three seconds off his 1500m PB (3:49.43) at the BMC Gold Standard in Birmingham last month. Alex ran under 1:47 for the first time last summer at the Bromley Twilight meeting and will have fond memories of the Trafford track, having set his previous PB here on his last visit in August 2019. Another to watch will be Brighton Phoenix’s Archie Davis, who took over a second off him 800m PB (1:47.26) last weekend Worthing.

Three U20 athletes (Henry Johnson, Joe Ewing and Daniel Joyce) have PBs within one second of the European U20 Championships standard and will undoubtedly be looking to get under the 1:49 mark required.

There is good depth expected as the women take to the track for two laps, with six of the field holding PBs under 2:05. They are led by 1:59 runner Alex Bell, fresh off her win over 1500m in Birmingham last month in her second fastest time over the distance. The Pudsey & Bramley athlete has no shortage of experience of the Trafford track, having raced on it 16 times over the past 14 years. This will also be her 30th BMC race, and she will be looking for her ninth BMC victory.

World Indoor Champion representative Mari Smith, who opened her season with 2:03.77 at the Birmingham University last month, and Irish Indoor Champion Louise Shanahan, who set a PB of 2:01.67 indoors in February, will be looking to challenge.

Katie Kirk (who in the spirit of continuing the London 2012 references was one of the seven athletes to light the Olympic Cauldron at the Opening Ceremony), Kirsty Fraser and Amy Griffiths also feature on the entry lists. Katie and Amy both opened their season in Birmingham last month (2:05.17 and 2:07.37 respectively), whilst this will be Kirsty’s first race of 2021. In conjunction with British Athletics, the BMC is also looking to provide domestic competition and Olympics qualification opportunities through the addition of 400m and 400m hurdles races to the schedule, a first for the BMC.

The evening’s action will be streamed live on Vinco via: https://www.vincosport.com/live/132376/. I will also provide updates from trackside via twitter (@james_athletics) and Instagram (@jrhodesathletics).