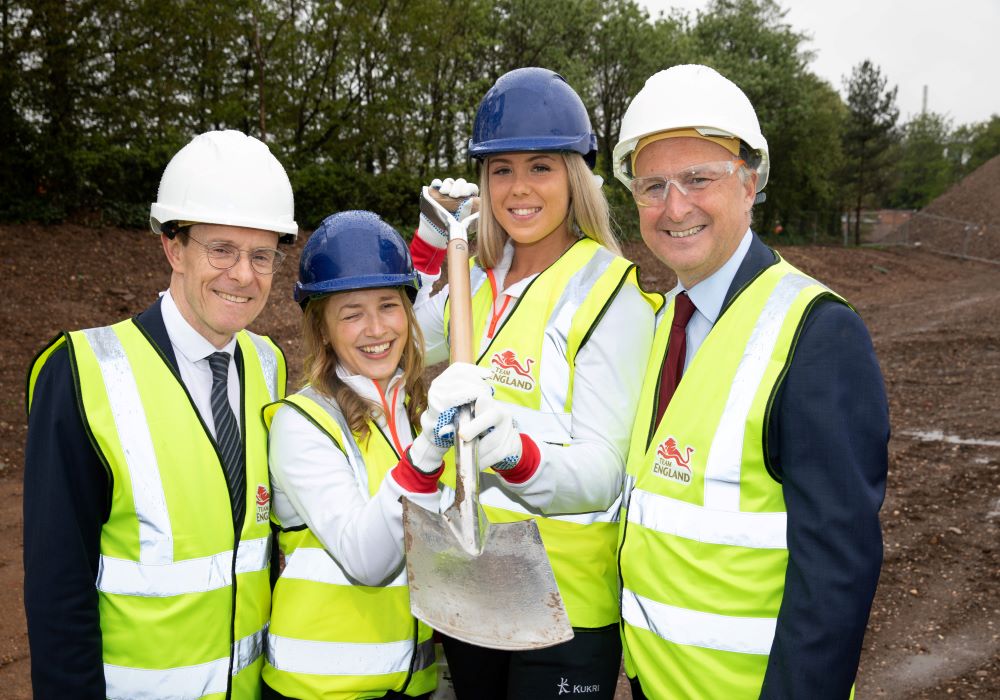 The site in Perry Barr will host 6500 athletes from over 70 countries from sports as wide ranging as lawn bowls and mountain biking through to Rugby 7s and of course the centre piece of any major games – athletics. The construction work for this residential element of the village, built on the site of the former Birmingham City University campus, is due for completion in early 2022. The ground breaking was attended by the Mayor of the West Midlands as well as Paralympic sprinter Katrina Hart and heptathlete Katie Stainton.

Paul Blanchard, Commonwealth Games England chief executive, said “When Team England compete in Birmingham in three years’ time, we know our athletes will have a great experience staying in the Athlete’s Village and will be given the support and opportunity to perform at their best in front of a home crowd. It’s very exciting to see the work that has been done so far on the village and the plans for the future with the legacy that the Commonwealth Games will bring.”

Post-Games, the development will be converted into more than 1,400 homes for the people of Birmingham, the first phase of a long-term regeneration plan for Perry Barr and surrounding areas that will provide 5,000 homes. The residential site alone is anticipated to create 400 jobs, including 50 new apprenticeships and 30 paid summer intern placements. The athletics events will take place in an upgraded Alexander Stadium, close to the athlete village site. New sport and leisure facilities will be developed and improved transport links, cycling and walking routes will make access to the stadium greatly improved post games.

How to Create a Great Athlete Experience

So what can Birmingham could do to make a great games experience for athletes attending? Louise Damen, who finished 7th in the Commonwealth Games marathon in Glasgow said “A great athlete village should have all the amenities on site, making them easily accessible; a gym, medical facilities, a canteen, laundrette etc. This makes it easier for athletes to focus on delivering their best performance at the Championships. A place where you can develop a sense of community is also really important. As an athlete you want to feel part of a team and part of the Championships that you are competing at.”

Heather Fell won a silver medal in modern pentathlon at the Beijing Olympic Games and recently ran a sub 3 hour marathon told us “There is something special about an athletes village, you are in a very safe yet completely surreal bubble. As an athlete you’ll know all of your direct competitors and even be friends with many of them off the field of play, even at a world championships everything and everyone is familiar. Going to a multisport games that all changes. The atmosphere; the mix of athletes yet to compete and those recovering, some partying, some as reserves, it is a melting pot for pure energy that everyone feeds off, whatever your role or situation there. Top that with the fact there is so much to do, so much great food to eat, brilliant ways to relax, new friends to make. But ultimately none of that matters until after your race, and then it’s time to let the fun begin.”

Bring in Local Athletes and Knowledge

Martin Williams, who competed in the marathon in the Commonwealth Games in Delhi said “I think Birmingham should try to think out the box and consult with all the differing events on what would make a great games experience. On the distance running side – how about organised routes athletes could use.” Williams who also raced in the European Championships in Barcelona highlighted the benefits of harnessing local knowledge – “Plenty of local athletes would be able to volunteer and chaperone runners for a set distance or pace. How about minibus’ out to the various parks i.e. Sutton Park? Break up the monotony of the ‘cabin fever’ of the athlete village. I would’ve loved to have had that option in Delhi. It’s great for international athletes to sample the different locations round the area. Something I’m willing to help out on also being local.”

A View From The Past

“The Brisbane Games were tagged The Friendly Games” says Mike Gratton bronze medallist in the 1982 Commonwealth Games marathon. “From participant point of view this was evident in the efforts to make it inclusive with the residents of the City of Brisbane. The climate helps, but during the three weeks the England team where there before the athletics started there were daily Bush Walks and trips out on millionaire yachts to white coral sand islands off the Brisbane Coast and BBQ’s, all with local volunteer groups.”

Gratton, now owner of 2:09 Events highlights the benefits of being able to relax in an around the village – “On site everything was very relaxed including a cinema with beanbags instead of seats showing a mix of Australian releases and motivational films – I managed to watch Picnic at Hanging Rock and Man on Snowy River, that had been released that year, and then Rocky the night before the marathon, which gets the adrenalin going. The England team had rented a couple of holiday apartments at Surfers Paradise as a bolthole from the games village just before competition – I was caught red handed by Chris Brasher eating a hamburger walking along the bay front a couple of days before the marathon!”.

The stars are out for Ipswich Twilight Races
Can a plant based diet sustain an active runner?