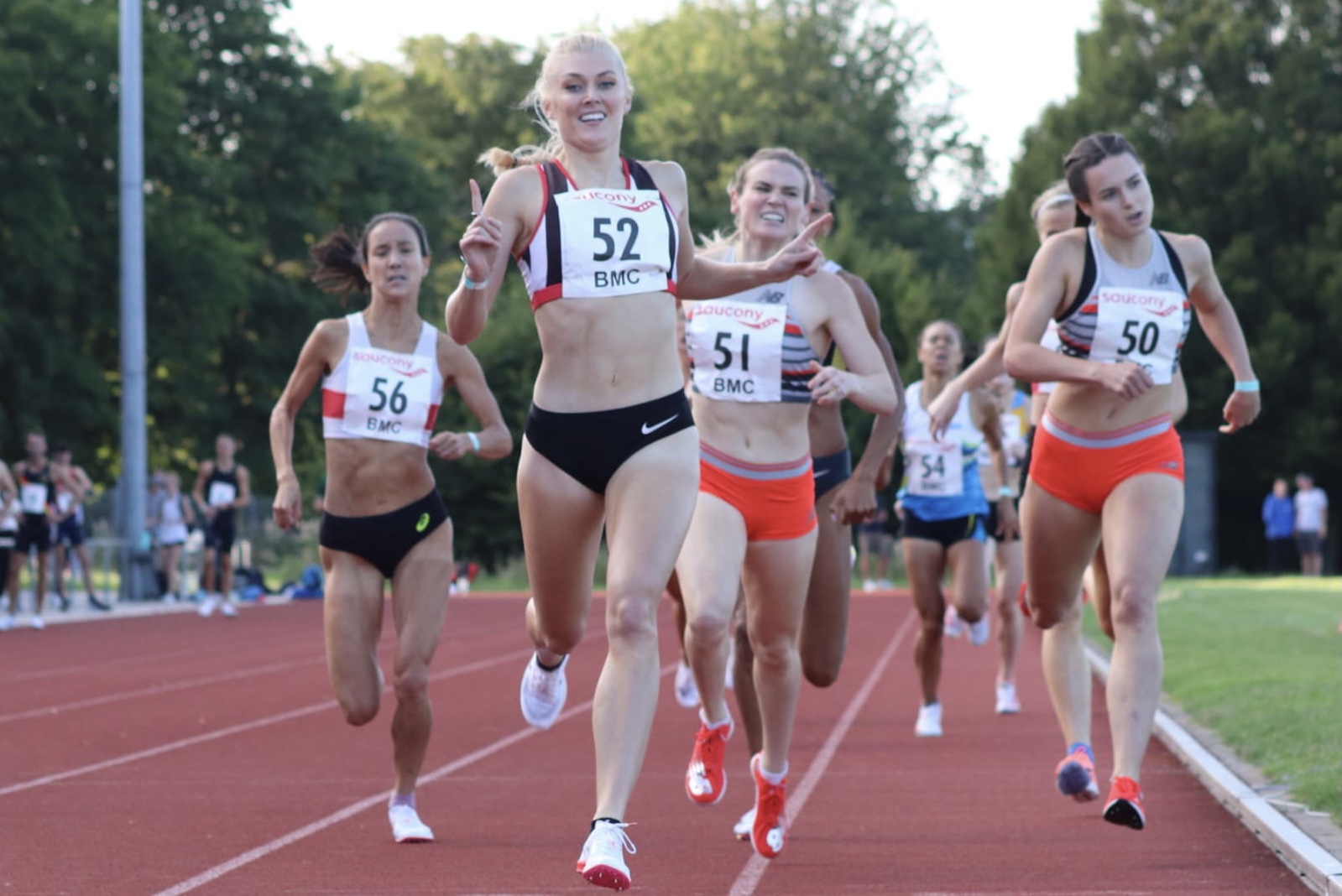 It’s been a big BMC week again this week, culminating with the BMC Grand Prix in Eltham last night where Jenny Nesbitt ran her eighth 5000m race of the year. At the last BMC grand Prix she ran tantalisingly close to the Welsh Commonwealth Games standard of 15:35.00, winning the race in 15:34.86.

Her consistency and grit has been admirable and everyone was willing her on in this attempt, but alas it wasn’t to be and she finished with a victory on the day, but in 15:39.55. She’s said that’s her last outdoor track race of the season, but she’s still got her eyes on a Commonwealth place so we will have to wait and see how that manifests itself. Abbie Donnelly was second behind Nesbitt, running 15:46.69 and Annabel Simpson third in 16:02.35.

It is three years since Callum Elson last raced 5000m and he has just stepped up into the senior category so he should be pleased with winning the men’s A race in a time of 14:07.71 and bettering his previous by well over a minute. Mitchell Byrne also ran a new best to take second in 14:08.79 and Ben Branagh was third in 14:17.48. In the men’s B race Aiden Lennan, who until this year could mainly be seen at parkrun and not much else, continued his excellent foray into racing knocking another 18 seconds off his best to win in 14:32.28.

In the B race Sam Steven’s got on the winning PB train with a huge improvement of 3:41.1. Over 800m Thomas Randolph was fastests in 1:47.4 and Ellie Baker in 2:01.66. This was the last of the Grand Prix fixtures for the season.

The BMC Gold Standard races in Watford on Wednesday night saw eight of the fourteen entrants in the women’s 1500m set new bests. Ellie Baker and Adelle Tracy were within a whisker of each other to go 1-2 in PBs of 4:06:54 and 56. Georgie Hartigan came in third in 4:13.99. Congratulations to Holly Dixon, Abigail Ives, Cheryl Nolan, Izzy Fry, Emily, Thompson, Maisy O’Sullivan for upgrading their targets. In the men’s competition St. Albans’ James McMurray ran a season’s best of 3:39.19 to take the win over 1500m, holding off U23 Tom Mortimer who ran an excellent PB to finish in 3:29:22. Just behind them was Mats Hauge of Norway, also setting a new best with his time of 3:39:40.

Going backwards through the week, it all kicked off for the BMC on Monday their Regional Races in Chester-le-Street and Leeds. In County Durham the 3000m saw Lewis Jagger of Sheffield & Dearne run a season’s best of 8:11.99, holding off Callum Elson who ran a new best of 8:15.64. Fife’s Steph Pennycock topped the mixed race in 9:24.28. The 800 went to U23 David Mullarky in 3:44.60 and Kate Avery in 4:21.8. Meanwhile, Leeds Beckett University it was only the double-lap option on offer and U20 Will Bellamy ran the winning time of 1:51.92 with Olivia Vareille setting a new best to take the women’s top spot in 2:05:59.

Elsey Davis continued her rise in the mountain running world, winning the incredible Scafell Pike Marathon, which is part of the Golden Trail Series and formed the trial race for the GB team for the World Championships in February. Davis’ time of 4:08:12 was enough to finish 9th overall.

Nichola Jackson finished second which should see her achieve GB selection in 4:18:40. Georgia Tindley was third in 2:24:19. Kirsteen Welch is currently top of the women’s Golden Trail table came in fourth in 4:28:13.  The next in the series will be the Ring of Steall on the 18th Sept.

A very different kind of racing and a lot of fun to watch, the International Inter Area Relays, organised but Northern Athletics saw teams from England, Armed Forces, area teams from the North and Midlands and a combined Leeds University team compete over two mile legs in Leeds today.

The England squad of Kate Avery, Nicole Taylor, Lucy Robinson, Sarah Astin and Lilly Coward won with a combined time of 52:10 – the fastest leg being run by Taylor in 10:15. Jess Judd took the Northern team off to a flying start with a 9:55 for her leg (the fastest of the women’s race) and contributed to their second place combined time of 52:27. The Midlands team took the final place on the podium in 54:21 – Eleanor Wallace was their fastest leg in 10:38.

The England team also took the men’s win with Miles Weatherseed, Alfie Manthorpe, Daniel Bebbington, Ricky Harvie and Jonathan Escalante-Phillips clocking 45:45 to beat the team from the North who ran 46:28 with Midlands third in 47:46. Alfie Manthorpe and Angus McMillan both ran 9:04 to clock the fastest leg.

Around the country – a bit of everything

The Trafford Grand Prix on Tuesday gave Chris Livesey victory over 3000m in a time of 8:40.90. Sadly there was only one woman racing over that distance, so a special mention to Amelia Beaman for her 11:13:56. Over 1500m it was a 4:23:26 run from Stephie Pennycook that secured her the victory and a 3:51.86 personal best for Jacob Cann in the men’s competition. At the Charnwood AC Open Daniel Hayes took the win over the 1500m in 4:02.35 and Eleanor Wilson in 4:46.56.Slightly further away, Archie Davis ran a 3:38.49 at the Ed Murphy Classic in Memphis, TN to place fifth.

Michael Mannings of Oldham & Royton Harriers and Heather Brown of Bolton Utd Harriers took home top marks at the Rochdale Harriers’ 10k with a 34:40 and 41:09 respectively, while one the Isle of Man there was the No Rest for the Wicked (10k) which either means junior Corrin Leeming and Rebekah Pate are wicked, or unrested, or something? Anyway, they won in a rapid 34:16 for the youngster and a solid 39:48 for Rebekah Pate.The Bugatti 10k is not named after the racing car but after the Bugatti Inn at Gretton. First home to the pub this year were Paul Hocking in 34:56 and Nicola Juniper in 40:24.

Gateshead Harriers hosted a very good quality field at the Quayside 5k which included Calum Johnson and Danielle Hodgkinson obliterating the course records with times of 14.10 and 16.21. The runners-up in each race certainly weren’t slacking either, with Liam Taylor taking second in 14:52 and Nathan Baker third in 14:56. Catriona MacDonald gained a confident second in 17:50 to beat Gillian Manford’s 18:17.

Calum Johnson and Danielle Hodgkinson (Wallsend Harriers) seriously smashed the course records at the #Quayside5k last night with times of 14.10 and 16.21.
Thank you to both and congratulations. pic.twitter.com/0W9Vjn8JM0

The Guernsey Athletics Track & Field Series had a 10,000m on offer on Thursday in St Peter Port. William Bodkin left the rest of the field trailing behind, clocking 31:08.2 for the win. Alex Rowe smashed out a 32:08.2 debut over the distance for second and James Priest was third in 33:24.2. Nicole Petit was top lady in 40:36.7.

Guess what the distance was at the Nuneaton Open -Night of 1500m PB’s was? No, me neither. No idea where the name came from either. Anyway, Adam Peacock (BRAT) and Brogan Wallace (Heathside) didn’t PB but they did win, so I’m sure they won’t mind. They ran 3:56.96 and 4:36.76 to lead home the field.

Burnham Beeches Half was won by Aran Davidson of Chiltern Harriers in 1:12:25 and Vaness Fursden in 1:30:29. The 10k saw Pippa Woolven second overall in a blistering time of 34:41 with Rich Peters just ahead in 33:58. Forfar RoadRunners also hosted a 10k today which resulted in wins for Natalie Wangler (37:14) and Jonas Muller (33:08).

South of the river, the Clapham 10k & 5km saw regular Dav5 Edwards top the table again thanks to his 35:41 and Steph Ede led the women home in 42:35. Sophie Bhatt clocked 21:03 for her 5k victory and Charlie Osbourne 18:29 for the men. In Solihull the distances stepped up to Half Marathon and 10k. Emma Styles left the rest of the field behind, racing home in 1:17:27 – five minutes ahead of second place Alice Daniel. Jason Bennet’s margin was smaller, he finished in 1:12:25 just 18 seconds ahead of Ludovic Renou. Over 10k the story was similar with Becki Timmings winning in 39:26 over three minutes ahead of her nearest rival. Owen Alexa on the other hand only had a twenty second buffer with his time of 36:25.

Both the Welsh and Scottish National Track Championships went ahead last weekend too, with the men’s 5000m being the most hotly contended endurance event at both. Tom Marshall won in Wales with 14:51.85, just two hundredths of a second ahead of Osian Perrin in 14:51.87.

Jamie Crowe led an impressive seven athletes under 15 minutes in Scotland, winning comfortably in 14:19.88, nearly ten seconds ahead of Alistair Hay in 14:28.98

Constance Nankive was the first of only five athletes in the women’s 5000m in Grangemouth stadium, in 17:38.52. We have been unable to find the results of the Welsh Athletics women’s 5000m, although we did hear that it was cancelled due to too few participants entered, which is very disappointing, especially as the Men’s 3000m steeplechase was able to go ahead with just two entrants.

Looking ahead to next week there’s the Manchester International and the The World Athletics U20 Championships in Nairobi starting on Wednesday. Then at the weekend we’ll see lots of returning Olympians duking it out at Hayward Field in the Prefontaine Classic and closer to home, the Big Half Marathon, which is always a great teaser for the London Marathon. We’ll have more news about startlists for you in the next couple of days. Lot’s to look forward to.