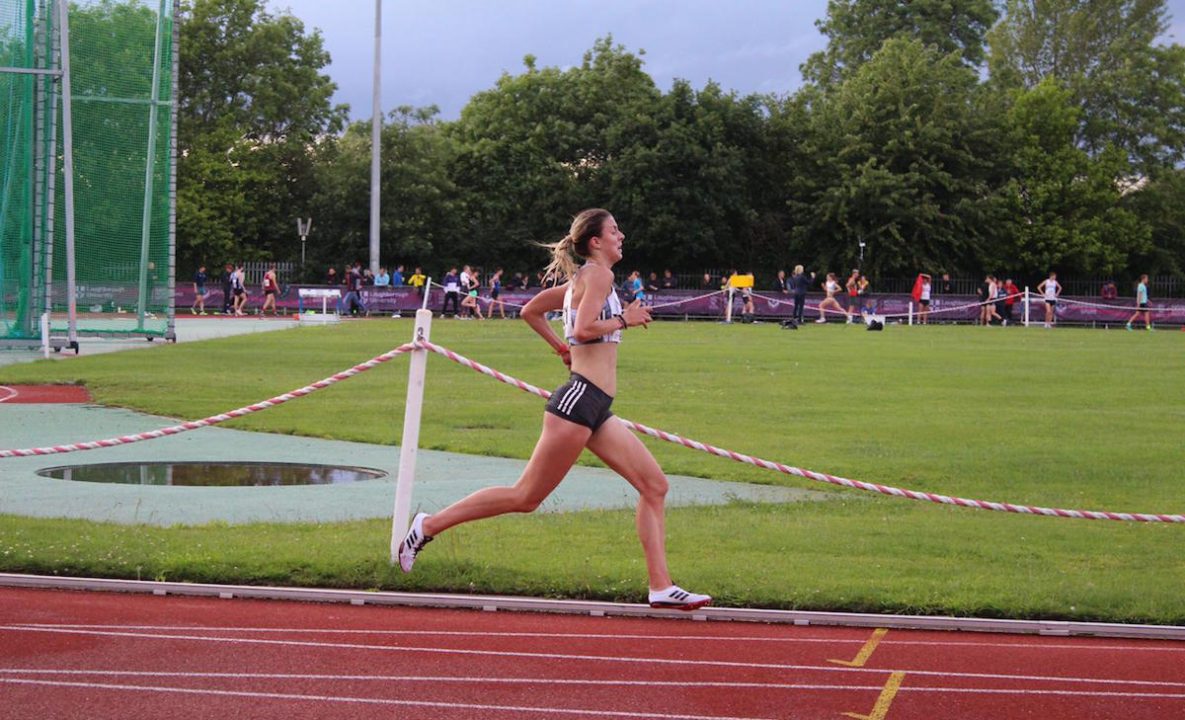 International runners Ben Connor and Jess Judd clock fast times over the 5k distance, whilst the rest of the weekend was filled up with half marathons in the Czech Republic and Dartford.

The weekend also saw speedy 10k’s at the Speedway 10k, Richmond, Pilling, and Nottingham and a handful of British runners getting World Champs qualifying times in just one 1500m race in the US.

Fast10’s Hannah Irwin was not only racing over 5000m this weekend but brings you the weekend round up for UK athletes at home and abroad.

Friday’s Podium 5k road race saw some cracking performances, with 33 people running 16:35 and under, despite being faced with truly wet British weather conditions.

Ben Connor took gold in a time of 13:54, 48 seconds ahead of second place. The St. Helens & Sutton athlete, Matthew Crehan, ran the exact same time of 14:42 as he did at the Fast Friday 5,000, even with the conditions not being favourable. One second behind in third place, was Morpeth’s Nick McCormick in 14:43. In Scotland the race was run over 5 miles at the Black Rock 5. Both the men and women pulled out brilliant performances. Lamar university student, Jamie Crowe, ran his first 5-mile race since 2013, running a four minute, 21 second PB of 22:05. Behind Crowe, in 22:44, was James Donald followed by Neil Renault in 23:23.

The former European Junior 1500m Champion, Morag Millar, ran to the top of the podium. Millar ran a strong race to cross the line in 25:25, 36 seconds ahead of second place, Stephanie Pennycook. Third across the line was Central AC’s Natalie Stewart in a time of 27:32.

Saturday night at the races

Saturday was filled with races on the track and road, including the BMC Grand Prix in Loughborough, the Mattoni Olomouc Half Marathon, the Dartford midnight half marathon and the Pilling 10k.

The U20 Halifax athlete, Max Burgin showed his strength over the 800m distance. Burgin set a new PB of 1:46.80 in a race he front ran from the gun, placing himself seventh in the all-time U20 rankings.

The Judd sisters dominated the Women’s A 5000m race. Jess ran her first PB in 2 years, to set a cracking time of 15:31 to take first place. Jodie, the younger Judd, was the first U23 to cross the line in a time of 16:04, one second inside of the U23 European qualifying time! The Swansea athlete, Verity Ockenden continued to prove her form, running 15:47 to place herself second to the elder Judd. [Weekend roundup author Hannah also ran an excellent PB of 16:36 at the event – Editor]

The Men’s 5000m race also had an impressive field. The St. Mary’s athlete, Emile Cairess, took the win in 13:50 to get himself a four second PB. Cairess was closely followed by Ellis Cross in 13:52 with another PB. Jake Shelley took bronze, crossing the finish line with a time of 13:56.

Also on the track an outstanding performance was given by Edinburgh AC’s Josh Kerr at the Brave Like Gabe men’s 1500m. Kerr crossed the line in 3:33:60 to get the win and break Steve Cram’s British U23 best! There was also a 3:35.95 PB for fellow Scot Neil Gourley and 3:35.74 for James West [who “bitch-kicked Gourley in the home straight”, whatever that means – Editor]

All three ran inside the qualifying time for the 1500m for the World Championships, which is a great sign for British middle distance running.

Over four times the distance, Steph Twell took to the road in the Czech Republic at the Mattoni Olomouc Half Marathon. Twell finished in fifth, crossing the line in 75:57. The 2:30 marathoner and recent winner of the Vitality London 10,000 led until halfway through the race, but faded in the second half.

The Dartford Midnight Half also took place on Saturday. Annaka Charters of Victoria Park Harriers dominated the race, finishing with a massive PB of 1:25:00, in an outright win.

The Pilling 10k, part of the Lancashire Race Series, saw Simon Croft of the Red Rose RR claim first prize in a time of 34:01, just under two-minutes ahead of Border Harriers’ Steven Berry. First woman across the line in a time of 43:59, was Blackburn Harriers’ Rachel Gavin, followed by Heather Travis in 45:05.

The fast and flat Speedway 10k did not disappoint. The rain managed to hold off to allow a very classy field of athletes to perform. At the top of the men’s podium, in an impressive 29:55 was Cardiff’s Matt Clowes. Behind him in second place was the Swansea athlete, Josh Griffiths. Griffiths clocked 30:12 whilst James Hunt ran 30:44 to come in third.

The first lady across the line was Lauren Cooper in a huge PB time. Cooper ran a 1 minute 34 second personal best to achieve a time of 34:54. The second lady home in 36:14 was Alaw Beynon-Thomas.

Also over the 10k distance, as part of the Surrey Road League was the Ranelagh Richmond 10k. Epsom’s Ollie Garrod claimed first place in 32:22, followed by Simon Baines of Thames Hare & Hounds in a time of 32:45 and Nick Marriage in third in 33:31.

The women’s race was won by Liz Davies with a significant lead. Davies just popped under 35-minutes, running 34:58 for the 10k distance. In second was Emily Wicks in 36:20 and third place went to Alice McGushin in 37:26.

In Nottingham, the Run For All- Nottingham 10k took place. Patrick Townsend of Notts AC took gold in the men’s race in 34:40, whilst Nicole Swaffield was first female across the line in 38:30.

The long running Seven Hills of Edinburgh is described as “a combination of road-running, cross-country, hill-running, and urban orienteering [with] 14.3 miles in length and with 2200 feet of ascent/descent”. The men’s winner was New Zealand international runner Sam McCutcheon in 1:37:21, running for Corstorphine AAC and the women’s winner was Irish international Nicola Duncan running for Carnethy in a time of 2:05:46. Danielle Hodgkinson and Omer Ahmed are your quickest parkrunners this weekend (June 15). Check out the full rankings here.