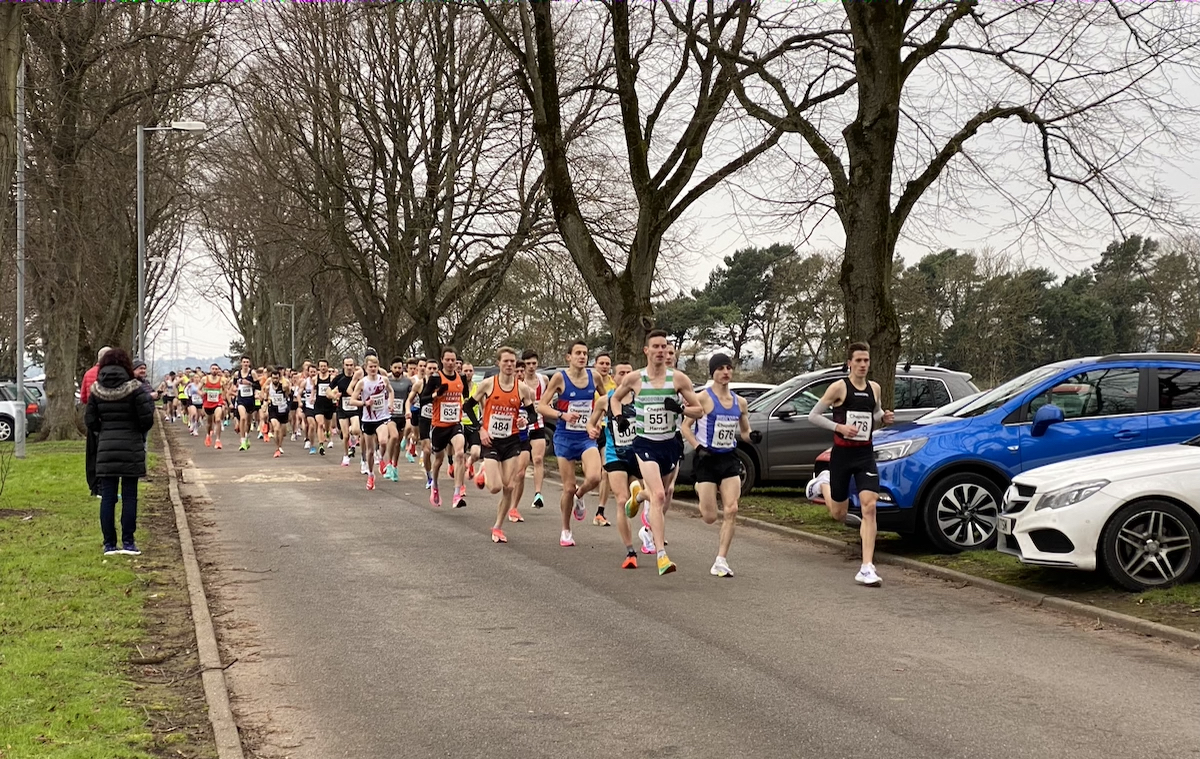 The highlight of this weekend’s cross country action came at the Northern Ireland International in Belfast, part of the World Athletics Silver Cross Country Tour which also incorporated the fourth stop of the British Athletics Cross Challenge, the Celtic Games and Home Countries International.

Making a surprise visit to Belfast, reigning World Cross Country Champion and two-time Olympic medallist Hellen Obiri led the senior women’s race from the outset and did not relinquish that lead, completing the 8km course in 26:44. There was a good battle behind, however, which saw Fast Running’s Hannah Irwin have an excellent race and move away from Mhairi MacLennan in the final home straight, with the duo completing the podium and taking the top two spots in the Cross Challenge.

Eleanor Bolton had a good race to move through the field and finish fourth, four seconds ahead of last month’s European Cross Country U20 Champion Megan Keith.

After fourth and second place finishes in Cardiff and Milton Keynes, Zakariya Mahamed made it to the top of the Cross Challenge podium with a win in the senior men’s race. Mahamed was joined by Stuart McCallum and Italian IIlliass Ouani in a break midway through the 10km race, and a strong last lap saw the Southampton athlete finish seven seconds ahead of Ouani (29:49 to 29:56), with McCallum a further seven seconds back for third (30:03).

In my review of 2021, I gave a cheer to Bryggen Sports for organising one of the only indoor events in England last year, getting across the line (pun intended) just before the nationwide lockdown curtailed all racing opportunities.

This weekend it was once again Vicente Mohdal’s team who kicked off the indoor season with the Boxx United Manchester World Indoor Tour at Sportcity on Saturday. The event also had the honour of being the first event of the prestigious World Indoor Tour that culminates with the World Indoor Championships in Belgrade in March.

The highlight from a distance perspective came from Osain Perrin who bettered his own 3000m British U20 Record (7:54.41) and became the third fastest European U20 in history over the distance. His time was a four second improvement from his previous best run in Sheffield a fortnight ago and suggests a strong season is ahead for the Welshman. Qatari Mohamad Al Garni won the race with 7:52.68. The fastest over 800m were Issy Boffey (2:03.11, her second fastest indoors) and Ben Greenwood (1:48.04, an indoor best). In all, 16 athletes set qualifying marks for the World Indoor Championships, a great start to the indoor season. It was not just Manchester that was providing indoor competitions over the weekend, however. In the capital, Lee Valley was playing host to the London Indoor Games, one of the largest indoor athletics competitions since before COVID-19 entered our dictionaries with over 850 athletes registered. The longest race distance of the weekend was 800m, where Ben Murphy (1:49.96) and Abigail Ives (2:06.07).

Taking place amidst COVID restrictions that limit the number of athletes allowed indoors at any one time to 30, Sunday’s Cardiff Met Non-Thomas Open included a series of races over 800m and 1500m. Highlights included outright PBs for Blake Moore (3:44.84) and Ellie Wallace (4:24.79), the fastest over 1500m.

Finally, to the British Masters 3000m Championships in Sheffield, hosted as part of a wider set of open competitions on the track and field. A four second margin of victory provided steeplechase specialist Daniel Eckersley (M35) with the fastest time of the afternoon (8:44.34), whilst an even bigger margin saw Alexis Dodd (W35) the fastest of eleven women in the field (10:52.74). Behind her was an impressive run by W60 Fiona Matheson in 11:01.55.

It would be remiss of me to not start the road roundup at the Santa Pola Half Marathon, where Jess Piasecki ran a superb 67:20 to finish second. That time sees her move to third on the British all-time list, behind Paula Radcliffe and Liz McColgan, and is a two minute improvement on her best. Safe to say it has been a fantastic twelve months for Jess that have included the Tokyo Olympics and a 31:19 10km at the Leeds Abbey Dash.

The title of fastest domestic road race of the weekend goes to the Speedway 10k in Chepstow, just outside Bristol. Organised by Chepstow Harriers, the event has built a reputation for accommodating fast times; indeed, the previous edition in May 2021 saw a comfortable win for Jenny Nesbitt whilst Omar Ahmed was the quickest of 12 men who finished in under 30 minutes and 53 in under 32 minutes.

This year’s event was equally as fast, with victory going to steeplechaser Phil Norman, improving from his second-place finish at this event in January 2020. Not only did he improve his placing by one, but with a 29:11 clocking he improved his PB by one second. Not a bad way to start the year for the Woodford athlete in just his third race since the Tokyo Olympics. Behind him were good outings for Josh Griffiths (29:14), Jonathan Cornish (29:22 PB), Dan Nash (29:27) and Dominic James (29:30 PB). In all, 11 men ran sub-30 and 33 sub-32 taking advantage of what were perfect racing conditions.

Alex Eykelbosch took to the win for the women ahead of an equally impressive field where nine women ran sub 35 minutes and 20 ran sub 37. The Dacorum athlete delivered what must the considered the best performance of her senior career to clock 33:31. Clara Evans, with 2021 highlights including a 2:31:19 marathon and PBs over 5000 and 10000 on the track, has started the year where she left off, her 33:44 seeing her hold off strong competition from Olivia Tsim (33:48), Elle Twentyman (33:49), Kirsteen Welch (33:49) and Kate Drew (33:58) to claim second spot. Andrew Heyes (64:17) and Philippa Bowden (76:12) had good outings at the Farnborough Half Marathon on Sunday, bettering the winning times of Stephen Blake (1:11:03) and Lesley Locks (1:18:51) last year. It was not an easy win for the Hallamshire athlete Heyes, with the top three separated by just six seconds with Sean Chalmers (64:22) second and Jonathan Glen (64:23). Last year’s winner Lesley Locks was second of the female athletes (78:30), with Carla Molinaro (79:31) third.

Also on Sunday was the Carlisle Resolution 5k / 10k, where the 10k race was celebrating its tenth anniversary. With the races starting and finishing at Carlisle Racecourse, Melissa Albarran (38:38) and David Holmes (32:28) were first across the line in the 10k, Jules Hatcher (17:03) and Fiona Smith (19:45) doing the same over 5k.

Sunday also saw the Nigel Barge Memorial 10k held in and around the Garscube Estate in Glasgow, a race named after the soldier and keen athlete killed during World War II. Organised by Maryhill Harriers, it is one of the oldest road races in Scotland, having been first held in January 1943. This year’s event continued its fine tradition, with Finlay Todd (31:36) and Meredith Reid (37:01) taking the respective wins.

It was also a weekend for the less-frequently run imperial distances, with a flurry of five- and ten-mile races taking place across the country.

The Great South Run may provide the fastest 10 miles of the year; however, there are a host of lower key but well-established races over the distance that attract some excellent fields of club runners. One such example is Sunday’s Fred Hughes 10, organised by St Albans Striders, where Scott Cousins (50:12) and Alice Belcher (59:21) took wins over a tough course that incorporates a number of challenging hills.

Staying in the south but moving to the Canterbury 10. Organised by Invicta East Kent Athletics Club and sponsored by Pentland Homes, the race provided Charlie Brisley (49:39) and Helen Gaunt (60:04) with lifetime bests in finishing as the fastest athletes. It must be a lucky course for both, as they also won the previous edition last August!

Although certified as a multi-terrain race, the Romsey 5 provides a flat and fast three-lap course in the grounds of the Broadlands Estate in Hampshire, and Annie Mann (29:22) and Gary Armstrong (26:30) made the most of the conditions and course to cross the line first.

Sticking with five miles, James Deane (24:59) and Gemma Collier (29:12) took wins at the 28th edition of the Linda Franks Race in Cheltenham.

The Kids Are Alright

By my count, there were eight School XC Championships taking place across the country this weekend, including Berkshire, Hampshire, Kent, Surrey, Somerset, West Midlands, Hereford & Worcestershire and Northant. Unfortunately, at the time of writing, results are online only for a small handful and, in the interests of fairness for all and given the extent of racing elsewhere, I have not included these today.

Not All About the Kids

At the other end of the age spectrum, there were also a couple of competitions in the mud dedicated for masters athletes. Wimbledon Common played host to the Vets AC Open Championships, with men and women running together across the five-mile course. Richard McDowell recorded an emphatic victory, finishing the five mile course over 45 seconds ahead of the rest of the field. Gina Galbraith was afforded a similar margin amongst the women racing.

At the same time as racing was underway in Wimbledon, the Sussex Masters Championships were kicking off about 40 miles to the south at Coombes Farm in Lancing. With the two genders running separately but over the same five-mile course that included 400 feet of elevation gain and, according to the course description a cattle grid. Results were not online at the time of publication (but I had already written this paragraph, so left it in!).