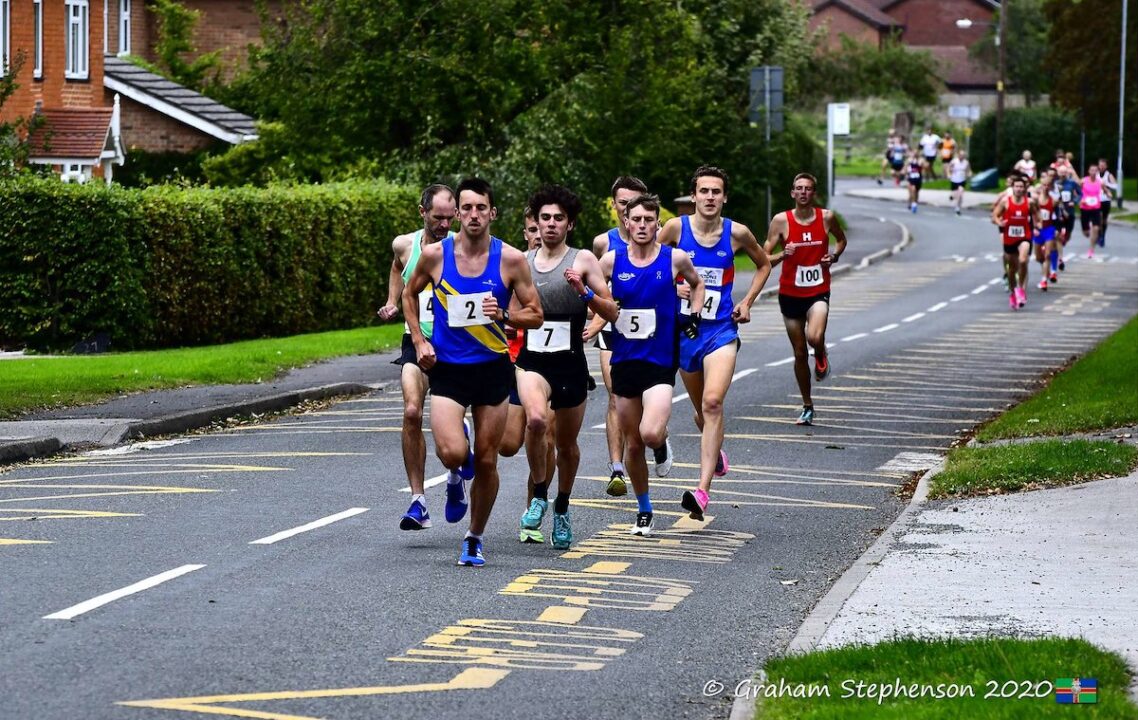 With races in short supply in this Covid era, the 17th annual running of the Bassingham Bash 5 Mile road race pulled out all the stops to make sure that it was able to go ahead on its allocated date of Saturday 26th September. But this year, this traditional club race looked somewhat different – a rolling wave start off grids, with runners in time bands, officials in PPE, few spectators, and a friendly police presence to ensure social distancing.

Although circumstances restricted the field to the 110 athletes who had signed up within a week of entries opening, the competition was compelling. The conditions were hardly ideal with a cold blustery wind but that didn’t stop both the men’s and ladies course records tumbling.

In the men’s competition a tight group of eight led the race on the small loop around the village. As they headed out to open country past the one-mile mark, local boy Linton Taylor (Leeds City AC) tested the water with a series of surges to the half-way point but to no avail. As the group worked into the wind between three and four miles it was the turn of veteran Alastair Watson (Notts AC) to make a move, opening a gap of about ten metres on the chasing group of four.

The race was resolved as the runners entered Bassingham village for the final stretch. Watson held onto his lead (‘’I could feel the pack closing”) to win in 24 minutes dead and to claim a new course record. Joe Monk (Preston Harriers) outsprinted Tom Straw (Lincoln Wellington AC) in a close battle for second. Linton Taylor (Leeds City AC), Euan Brown (Hallamshire Harriers) and Lee Milburn (Rotherham Harriers) finished in short order, chased in by Ed Buck (Newark AC) who took the first U23 prize with a time of 24.53. The front of the ladies’ race saw the Race Director’s protégé Cloe Hubbard (Newark AC), put her inside knowledge of the course to good use. After a fast first mile she had a gap of thirty metres on Gemma Steel (Charnwood AC), so decided that there was “nothing to lose by pushing on”. In the event Hubbard surprised herself by conquering the poor weather conditions and running a minute faster than she did the previous year. She recorded 27.11 to break the course record by four seconds.

In the veteran categories some notable performances were recorded. Race winner Watson excepted the first man over forty was V45 Jan Bailey (Newark AC) in 25.40 which is a time that would put him on top of the UK age rankings most years regardless of the health crisis. Evergreen Greg Southern (Sleaford Striders) led home the V50 category with 27.50 for 27th place overall. W50 Tracy Fearn from Caistor RC headed up the ladies over forties race with a time of 31.33

The depth of the field meant that all the runners finished within 15 minutes of the leader, with competitive racing throughout – more than half than the field ran under 30 minutes with numerous PB’s despite the poor weather.

Whilst it was a massive organisation challenge to get the event on at all, credit should also be given to Sport Clinical (www.sportsclinical.co.uk) who continued to support the race financially to enable cash prizes, even though the reduced size, limited marketing and no prize presentation have impacted the commercial benefits the race would normally provide.