Back with a Bang – weekend roundup 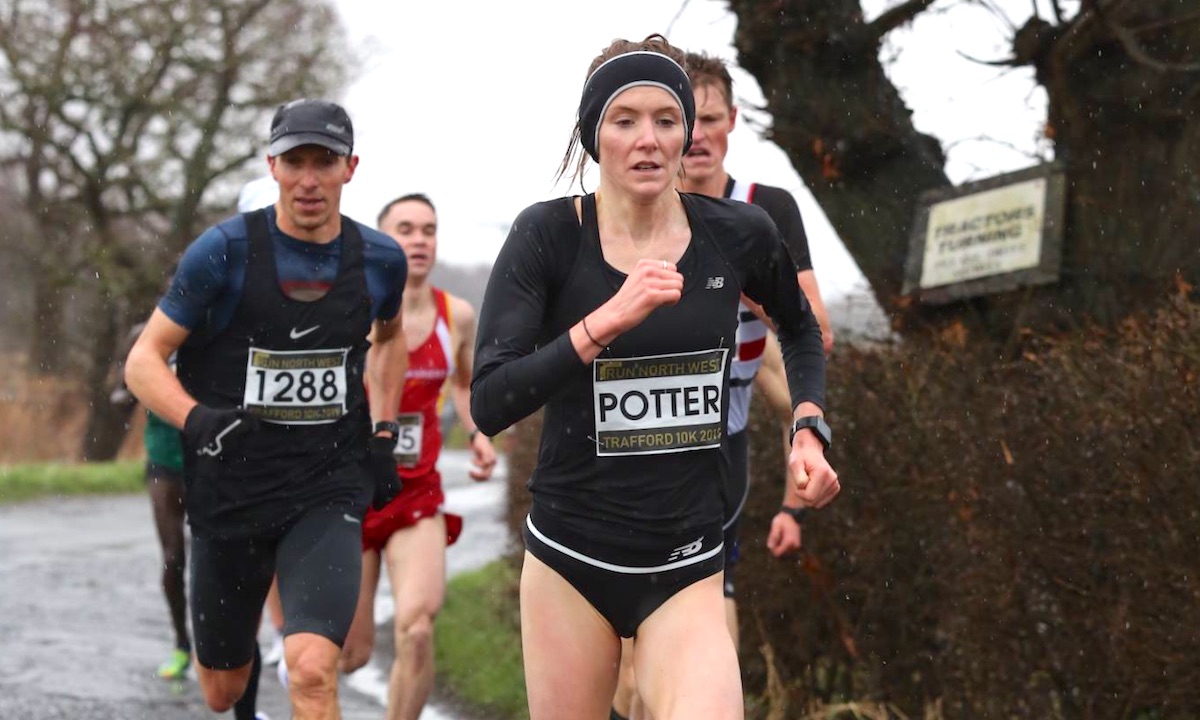 James Rhodes brings you all the action as racing returns, bringing with it some stunning results

This week saw the long awaited return of non-elite racing in England. Whether you are an athlete, coach, spectator, or all of these, it has been something to look forward to for the past few weeks.

It is fair to say it did not disappoint. Here’s a whirlwind run-through of an action-packed few days.

I do not think I am wrong to suggest that, 24 hours ago, no one would have predicted I would be kicking off this round up with a (possible) World Record, run just outside a village in Lancashire on a Saturday evening. However, that is exactly what happened at the year’s first Podium 5k.

Beth Potter, based about 50km to the east in Leeds as part of their elite triathlon group including Alistair and Johnny Brownlee, had asked to run in the men’s race to try to hit a good time. It is safe to say she delivered on that attempt.

The Scot ran a simply incredible 14:41 to become the second fastest woman over the distance in history, and go two seconds faster than the current World Record (14:43), set by Beatrice Chepkoech in Monaco in February.

Yes, you read that correctly, World Athletics didn’t recognise the road 5k as a WR event until 2018, so the “World Record” is not actually the fastest in history – that honour goes to Joyciline Jepkosgei’s 14:32 split in Prague in 2017. The time also takes ten seconds off Paula Radcliffe’s British Record, set over 17 years ago.

I spoke to Beth to get her thoughts after the run of her life. She explained that, whilst the pace was faster than advertised, she knew there was a need to keep with the pace to avoid running in no-mans-land. This was clearly working, and it was towards the final kilometre that she realised something special was on the cards;

“Coming onto the last lap, with just over 1km to go, I saw the clock at 11-something and in my head I was thinking ‘about 3 minutes for this last lap and we are going to be 14-something’. When I crossed the line I saw the time and couldn’t really believe it”.

That time is a 43 second PB for the Scot, improving her time set on the same course last August. Of course, there was much animation on social media as people began to realise not only the British Record had been broken, but that the World Record might have been bettered also. How about on the ground in Barrowford?

“Well I had no idea what the WR was, the only thing I wanted to immediately do is confirm the time, as of course it was very fast! About five minutes later people started saying things about the WR and it went from there”.

Whilst the last three years have seen focus on the triathlon (including a win at the Super League Triathlon at the Olympic Park just last weekend), Beth is no stranger to running. She has competed on the track at the Olympics, World Championships, European Championships and Commonwealth Games, as well as at the World and Euro XC Champs.

She was also crowned British Champion over 10,000m in 2017, at my personal favourite edition of the always-superb Night of the 10k PBs. Beth notes the role that this change in direction in her sporting career has had in reaching performances such as Saturday’s. “Being a triathlete now I am not running as much as I used to, but I really believe the conditioning that comes from all the cross-training is so, so valuable”. It is also worth noting, since making the switch towards triathlon, Beth has put her physics teaching career on hold to focus on her sporting dreams. Plus, as many athletes have noted, lockdown has allowed Beth to “really get my head down with no distractions”, and alongside an injury-free four years, “everything has come together”.

This is the things athlete’s dreams are made of. Did the dreams of a much younger Beth, at the start of her athletics career, ever envisage something like this? Of course, but she is also not forgetting of the support she has received throughout her career;

“This sort of thing is something I have always aspired to. To be in the same conversation as Paula or some of the other great runners is amazing. But I am really just happy for all the people around me. It is the work day in day out that get results like this”.

Whilst World Athletics has confirmed the time is unlikely to be ratified as the World Record due to full procedures not being in place, it is still an outstanding performance. If I am honest, I am still a bit speechless.

If I am speechless, how about Beth herself, has the magnitude of what was achieved sunk in?

“No, not really. I just went to try to push myself and see what I could run and that was the result. The support, messages and calls from everyone has been overwhelming. But you are only as good as your next race, so it is head down and continue working for me!”.

That work has included a four hour bike ride today, in preparation for the next triathlons; the Arena Games in Rotterdam in a fortnight, and hopefully the World Triathlon Championship Series in Yokohama in mid-May.

The men’s A race was won by Tom Mortimer, who outsprinted Phil Sesemann to cross the line in 13:39, a 32 second PB. The first ten finishers all ran under 14 minutes with Sesemann running 13:40 and Andrew Heyes 3rd with a fine 13:36.

Elsewhere, Mick Hill set a V45 British Record (14:44) and Revee Walcott Nolan made an excellent debut over the distance with 15:50. Samantha Harrison put in a strong display off the back of recent marathon training to clock 15:53 and Mhairi Maclennan was the 3rd fastest woman on the night racing in the 16:30 race she clocked 15:47.

After Marc Scott’s 13:20 British Record last August, Podium is certainly living up to its tagline as the fastest “course in the country”. By my count, a total of 133 athletes ran a PB. [Writer’s Note: shoe-related chat has been deliberately avoided. There are plenty of other articles focusing on this element, should you wish]

Thanks to COVID, it had been over a year since a non-elite 5000m had been raced on the track in England. Wednesday saw the much anticipated return of the distance at the Comeback 5000 at Battersea Park, jointly hosted by Belgrave and Herne Hill Harriers.

The women’s elite race provided a demonstration opportunity for Jenny Nesbitt, crossing the line in 15:46.62, the second fastest of her career. Behind her was a gutsy run from Fast Running’s own Hannah Irwin, who ran the second half solo and was rewarded with a 23 second PB and 16:01.29 for second. Seven of the 11 in the field ran PBs, including Charlotte Alexander’s 16:35.09, which is under the European U20 qualifying time, but doesn’t count due to the use of male pacemakers.

The event was a demonstration of what is possible with domestic middle distance racing when passionate and dedicated people are involved. In the absence of on-site spectators it provided a high-quality livestream for all races, a prize pot built up by fans in excess of £1500, and some superb fields.

It would also be reminds of me to not express my gratitude to Steve Gardner for organising the event, as I came away with a 10 second PB in one of the earlier races (16:40.66). You wait a while for a World Record, then two come in the space of 15 hours! Kenya’s Ruth Chepngetich took 29 seconds off the half marathon World Record with a 64:02 performance in Instanbul on Sunday morning, bettering the previous mark set last February by Ababel Yeshaneh.

Notably, it is also faster than the 64:28 run by Brigid Kosgei at the 2019 Great North Run, a course ineligible for World Records. The pace was fast from the start, with the leaders passing through 5k in 15:07 and 10k in 30:21. By 15k, the leading pack was down to three (Chepngetich, Yalemzerf Yehualaw and debutant Hellen Obiri) and went through in 45.29, 13 seconds ahead of WR pace. The reigning marathon World Champion and two-time winner in Istanbul broke away to record the fastest time in history.

The men’s race was won by World Record holder Kibiwott Kandie in 59:35, the sixth half marathon win of his career. He certainly put the burners on in the last quarter of the race to shake off Geoffrey Kamworor, running the last 1.1km in 2:55 – that is 2:39/km pace!

Road Racing Round Up

After three months away, there were plenty of other road races dotted across the country. Saturday saw a return to marathon racing at Dorney Lake, with wins for Jordan Andrews (2:25;50) and Samantha Amend (2:52:36). The races provided good depth, with the top six men all ran under 2:30 and 52 going quicker than 2:45.

Seven women finished in under three hours; these included Fast 10’s Karla Borland, who ran 2:57:11 for fifth. That is a 27 second PB, run in the middle of 100 mile training, bettering a time set at the 2015 London Marathon. A very impressive result.

The 10k races saw dominant wins for Scott Overall (29:59) and Julia Bijl (35:58), the latter winning with a six minute margin. The shortest race of the day saw victories for Daniel Bulbrook (16:34) and triathlete Olivia Matthews (16:56). Athletes based in the collegiate system in the United States (as well as those based there to train) continue to provide us with plenty to write about.

The highlight belongs to Charles Hicks, who ran 28:25.29 on his 10,000m debut; a time that is almost 45 seconds under the qualifying standard for this summer’s European U23 Championships. Not a bad first outing for the Shaftesbury Barnet athlete!

Following its rebuild ahead of hosting the 2022 World Championships, the new Hayward Field hosted its first competition on Friday and Saturday, with a handful of Brits in action. These included Patrick Dever, fresh from his fifth place finish at the NCAA XC, who ran a 28:28.13 10,000m in his debut over the distance. Behind him Jack Leitch bettered his PB by over a minute with 29:47.21.
There were also debuts over 25 laps for Bella Williams and Grace Brock, who ran 33:17.07 and 33:59.31 respectively. Following a good XC season, Poppy Tank took over 20 seconds off her 5000m PB with 15:45.07.