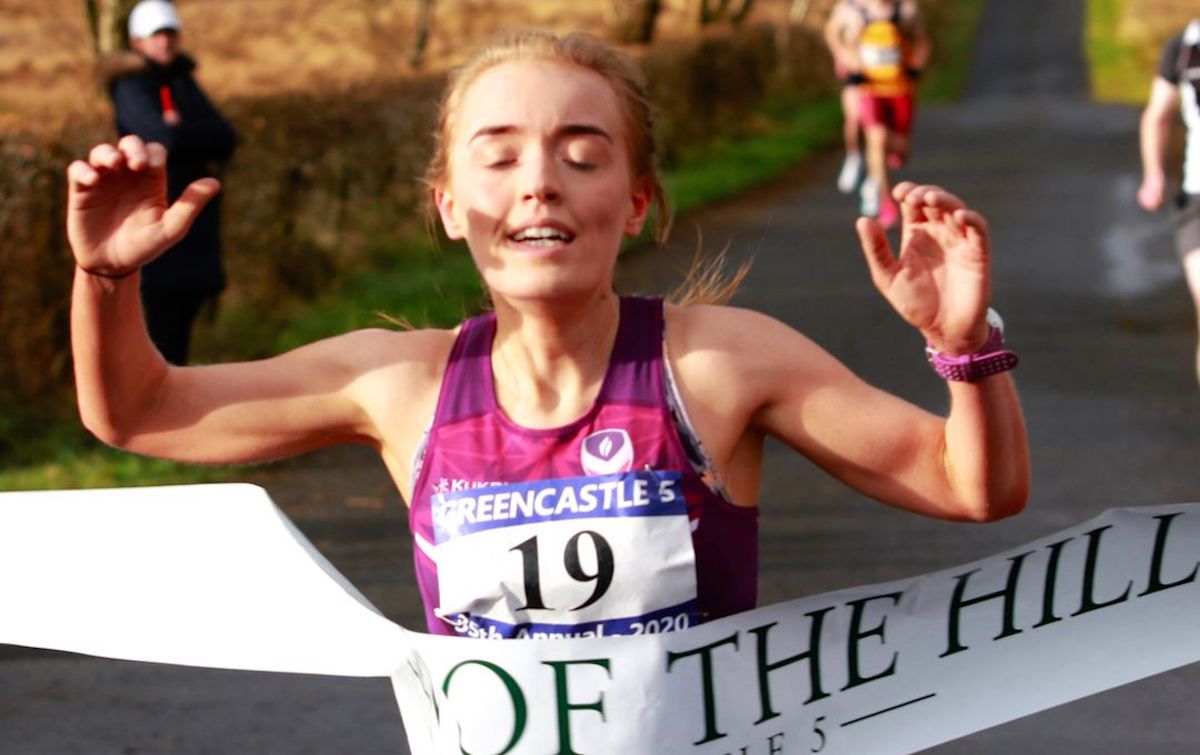 In a year with big gaps in terms of competition, Lindie Naughton has been ready when the action packed weekends do crop up.

McKinstry’s time of 12 mins 02 secs saw him hold off the challenge of of Craig McMeechan of North Down AC, who finished five seconds adrift in 12:09. In third place was Aaron McGrady of East Down AC in 12.25, while fourth and first junior was Conor Maguire of Monaghan Phoenix AC in 12:33. Second junior in sixth place was Sean McGinley of Finn Valley AC in 12:39.

Catherine Whoriskey of City of Derry Spartans was a clear winner of the women’s race in 14 mins 9 secs. Whoriskey is the current Northern Ireland and Ulster 10,000m champion.

Second and first U20 was Niamh Carr of Ballymena and Antrim AC in 14:26, with Caitlyn Harvey of Lagan Valley third in 14:50. A number of masters ran the race with Karen Wilton of Jog Lisburn RC sixth overall and first W45 in 16:07; Sharon Madine of East Down AC was first W50 in 16:50.

Winning a well-supported men’s masters race was Neill Weir M40 of Willowfield Harriers in 13:08, with David McNeilly of Newcastle and District AC second in 13:12 and Lorcan Vallely of Armagh AC third in 13:50.

Fourth and first M50 was Nigel McKibbin of Dromore AC in 13:54, while fifth and first M45 was Steven Todd of Dub RC in 14:16. Finishing eighth and first M60 was Laurence Johnston of North Belfast Harriers in 14:47. In ninth place and first M55 was Simon Boyle of North Down in 14:57. First M65 was unattached athlete Gerry O’Doherty in 16:02. The introduction of a Covid-19 lockdown from Boxing Day forced organiser Oliver McCullagh into a last minute decision to bring the 33rd annual the Greencastle 5 Miles in Co Tyrone forward to Sunday (20 Dec) from its usual date of December 26.

Despite the last minute change, the race attracted a strong entry with Conor Duffy of Glaslough Harriers beating the defending champion Neil Johnston of Annadale Harriers to come home first in 24 mins 35 secs. Johnston was only four seconds behind in 24:39, with his Annadale clubmate Eskander Turki third in 24:43. Mountain runner Zak Hanna of Newcastle and District was fourth in 24:48.

Of the masters, first M40 was was Colin Heron of Keep Er Lit AC in 27.13, while super vet and world marathon record holder Tommy Hughes of Strive AC was first M60 and second master overall in 27:53. First junior was Oisin Cassidy of St Michael’s College Enniskillen in 28:07.

Grace Carson of Mid-Ulster AC and Loughborough was a clear winner of the women’s race in a fast time of 28 mins 12 secs. Second in 30:25 was Rachel Gibson of North Down AC, while third and first W40 was Pauline McGurren in 31:59.

No joy for Hassett in the US

In the USA, Leevale AC’s Dylan Hassett, clocked a time of 2 hrs 36 mins 53 secs at The Marathon Project, a restricted entry marathon held on 4.3-mile loop around the Rawhide Events Centre, on the Gila River Indian Reservation in Chandler, Arizona, on Sunday (December 20).

Before she declared for Ireland in 2018, Hassett had qualified for the 2016 USA Olympic Marathon Trials with a half marathon time of 1:14:09.

Last January, she ran a personal best of 2:35:29 for the marathon in Houston and her goal in Arizona was to make the Tokyo Olympics qualifying time of 2:29.30. Reaching halfway in 74 mins 36 secs, she was still on target, but unfortunately, she then began slowing down lost, dropping from 11th to 26th place by the finish. A total of 35 women finished the race. Sean Tobin of Clonmel AC ran a fast time of 28 mins 30 mins 91 secs to win the 10,000m at the Athletics Northern Ireland Winter Sprints and 10,000m meet held at the Mary Peters Track in Belfast on Saturday (December 19).

His time was the fastest by an Irishman since 2009 and a track record. Finishing second in 28:41.71 was Brian Fay of Raheny Shamrocks.

Andrew Coscoran of Star of the Sea AC, a 1500m specialist, was third in 29:01.21 followed by Hiko Tonosa of Dundrum South Dublin AC in 29:06.10. All four athletes train with the Dublin Track Club group.

With athletes travelling from all over Ireland for the race, Jake O’Regan of St John’s AC was fifth in 29:29.23, followed by Hugh Armstrong of Ballina AC in 30:18.92. Junior athlete Tadgh Donnelly of Drogheda and District AC, seventh in 30:19.6, missed the national junior record by only two seconds.

Finishing eighth and first of the local Northern Irish athletes was Andrew Annett of Mourne Runners in 31:21.18. Winning the B race was Eoin Mullan of Omagh Harriers in 31:58.42.

“Thanks to Athletics NI for giving us the opportunity to race. Nice to blow the winter cobwebs off. Hopefully we’ll get more race opportunities in the new year,” Tobin tweeted after the race.

Running in the Athletics Northern Ireland Winter Middle Distance Meet at the same venue on Wednesday (December 16), John Black of North Belfast Harriers produced the fastest 3000m time of the night when winning the A grade race in 8:43.03. Fastest woman was Rachel Gibson of North Down AC with a time of 9:53.55.

Catch up from last week In Australia, Sinead Diver from Belmullet in Co Mayo finished fifth in the 10km race at the annual Launceston Running Festival in Tasmania, on Sunday December 13. The festival normally takes place in June but was postponed this year due to Covid-19.

In a competitive race, Diver recorded a time of 32:16; winner was Genevieve Gregson in 32 minutes exactly. Just sixteen seconds separated the first five across the line, with the top eleven women finishers all under 35 minutes.

In June 2018, Diver had won the race for a second year in a personal best time of 31:59. Her big date in 2021 is the Tokyo Olympic Games, where she will represent Australia in the marathon.

With largescale lockdowns scheduled to return to the island of Ireland on December 26, the athletics calendar is again in disarray. Among the festive races cancelled are the Castlewellan Christmas Cracker on December 28 and the Race over the Glens at Glenarriff on New Year’s Day, as well as the New Year’s Day 5km in Dublin’s Phoenix Park.

Also gone is the annual GOAL Mile, a traditional part of the holiday festivities at venues all over the country for over two decades

“On the plus side, anyone who wants can now run a mile for GOAL over the holiday period – they don’t even need to be in Ireland,” says Alan Vard of the Dublin-based third world charity. Full details of how to register here.

Athletics Ireland has announded that the All ireland National Indoors Championshipd are pencilled in for the weekend of February 20/21.

After that will come a truncated cross-country season, with juvenile races on Sunday February 28, March 13, March 14, March 27 and March 28 and senior races on March 13 and March 14. Full details

Sub 2:30 marathon debut for Inglis – weekend roundup
How to have Fun on an FKT