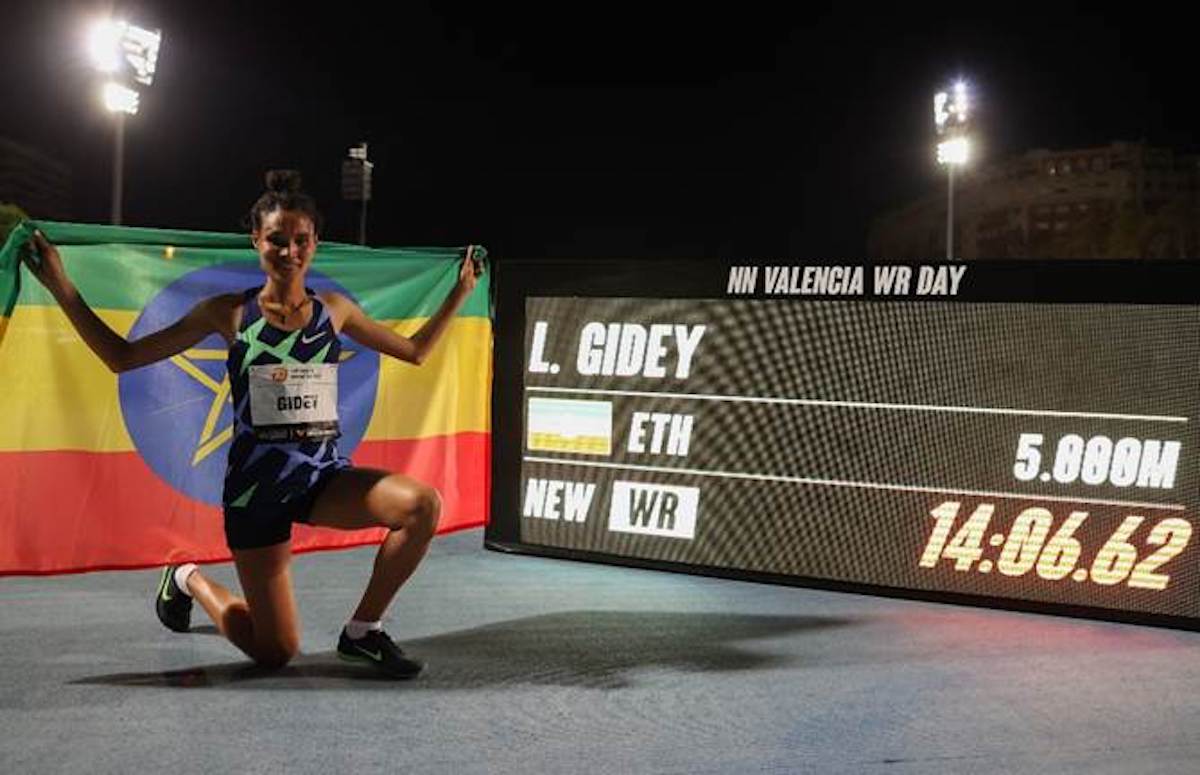 Ethiopian Gidey ignited the NN Valencia World Record Day with a spellbinding performance to obliterate the women’s 5000m record by more than four seconds with a stunning 14:06.62.

Aided by pacemaking duo Esther Guerrero and Beatrice Chepkoech, and the Wavelight technology, the 22-year-old Ethiopian produced a very well judged run to destroy the world record of her compatriot Tirunesh Dibaba. When pace maker Chepkoech stepped aside, Gidey pushed the pace even harder.

Running in a nigh on perfect temperature of 22c inside the Turia Stadium, Letesenbet hit the 3km point in 8:31.85 – ahead of her target time.

Gidey has a particularly fluid flowing style but more than this she looked incredibly in control in terms of effort. Just after 3km she put in a scintillating lap of 66 second. Looking untroubled and composed the World 10,000m silver medallist romped to her place in history.

“I dreamed for this record for 6 years, I want to thank Valencia for giving me this chance.” It was then the turn of Joshua Cheptegei to toast yet another landmark moment in his glittering 2020 season by smashing Kenenisa Bekele’s world 10,000m record by more than six-and-a-half seconds with a dazzling display.

The 24-year-old Ugandan ran a time of 26:11.00 to erase Bekele’s 15-year-old mark of 26:17.53 from the record books. The one-off meet was organised by the NN Running Team, Global Sports Communication and SD Correcaminos as a direct response to Joshua’s outstanding current form.

“One of the strange things about watching the race was the lack of doubt,” says FR coach Robbie Britton. “From very early on it felt like it was going to happen.

A record that stood for a decade and a half was just obliterated and all that needed to happen was for Chetegei to run at the set pace for 26 minutes and change.”

In August, Joshua sliced 1.99 seconds from Kenenisa’s world 5000m record, clocking a stunning 12:35.36 in Monaco, and on a hot and humid night at the Turia Stadium he added the world 10,000m record to his increasingly impressive CV. A place in history

Paced through to halfway in 13:07.73 and further aided by Wavelight Technology in the second half of the race, the World 10,000m champion ticked off the laps at a relentless 62-64 second pace to claim another slice of history.

Having achieved the world record mark he now joins some of the all-time greats to have held ownership of the world 10,000m record such as Emil Zatopek, Haile Gebrselassie and Bekele.

“It is a great moment for me to have broken the world record,” said Cheptegei, who also holds the world 5km and 15km road records. “I wanted to show the sports lovers of the world that the track is exciting. I wanted to lift the expectations of the Valencia World Record Day and I am pleased to have fulfilled my dream.”

You can catch the full races here;

With the dedicated race, the Nike shoe technology, the pacing and Wavelight Technology the event had a little of the feel of the Breaking2 Project. Streamed to a worldwide audience on the NN Running Team YouTube and via the BBC the performances were always going too draw a huge amount of comment.

For many the event was a moment in history. BBC commentator Rob Walker described the intimate atmosphere of the city centre track and called Cheptegei’s run a “journey to greatness”. It certainly had a feel of a ‘I was watching’ moment.

Others however immediately glanced a skeptical eye over the results with the unusual ‘racing’ format, and of course the ever present shoe and spike debate being highlighted.

Fast Running’s Tom Craggs said “times and world records are so woven into the fabric and history of athletics that it is hard to see them fall if there is a feeling of manufacture around it.

We cling to the purity and simplicity of the sport of running, perhaps even more so during periods of wider socio-political insecurity. We want to believe.

I am still processing my feelings about last night but both performances were clearly astounding feats of physical endurance and regardless of the discomfort I feel around elements of it, I will definitely take a moment to celebrate two absolutely sensational athletes.

I believe, however, that the flood of national, continental and world records we are seeing currently does not represent a big leap forwards in solely biophysical performance”.