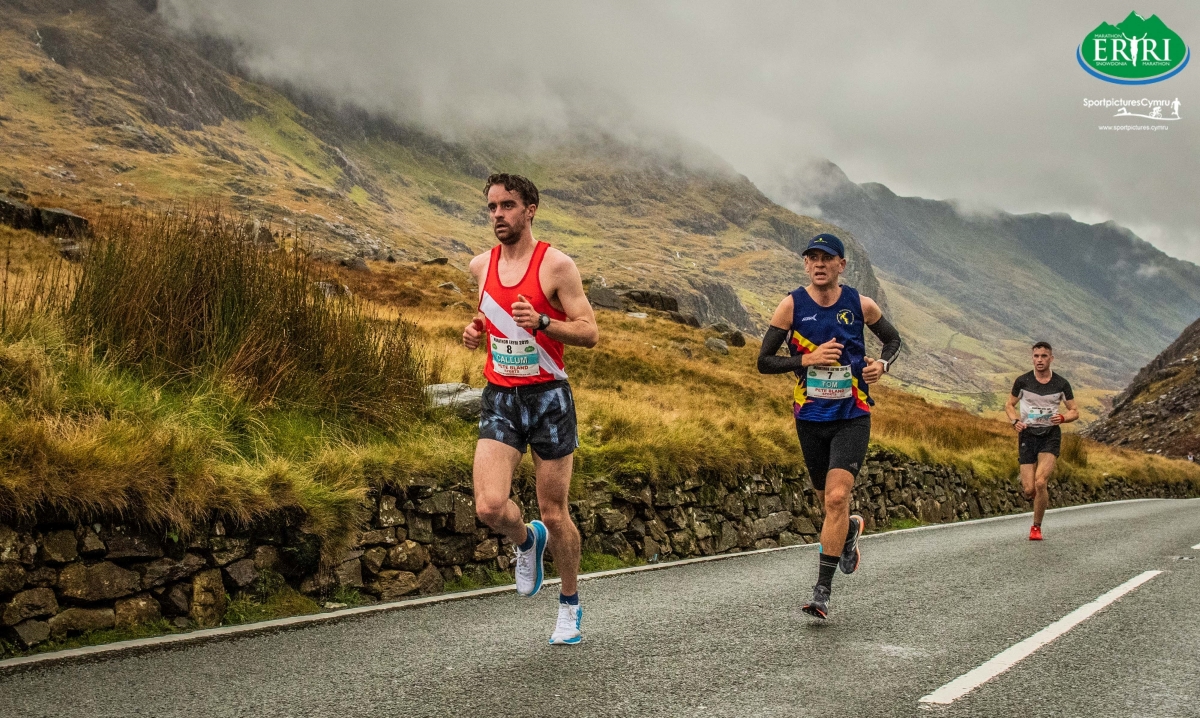 Callum Rowlinson and Andrea Rowlands became the latest winners of the Snowdonia Marathon Eryri on Saturday, as both produced runs of strength and determination to win one of the UK’s most prestigious marathon crowns.

Starting under grey skies, chilly temperatures and in steady rain, a record number of starters headed out of Nant Peris for the 37th running of this classic event. Runners from as far-a-field as the US and Australia had made the long journey to take part, and as they headed up the Llanberis Pass after the traditional 10.30am start the buoyant mood of the runners made sure that the weather was not going to deter the fantastic atmosphere that this annual celebration of running produces.

To and fro in the early miles

As the race began to develop in the men’s event on the long and steady climb to Pen y Pass at mile 5, it was clear that this was going to be a battle between Salford runner Rowlinson, local man Tom Roberts, Mercia Fell Runner Dan Connolly and last year’s runner-up Martin Green.

In the women’s race it was shaping up to be a repeat of last year, when Anna Bracegirdle and Eryri Harrier Rowlands battled it out. It was the 2018 winner Bracegirdle who took it out hard on the Llanberis Pass to reach to the summit and the first feed station in 33:15, a lead of over one minute on Rowlands.

Meanwhile in the men’s race Rowlinson crested Pen y Pass with Roberts and Connolly in close attendance. Their time of around 27:38 demonstrated that if they could stay together and make a race of it the course record of 2:33:38, held by 2015 winner John Gilbert, was within sight.

As they hit halfway and up to mile-14 the race had now developed into a two-way battle between Rowlinson and Roberts, with Green and Connolly running around three minutes back in third. However, for Roberts and Connolly this was their debut marathon and they were now into unknown territory as they began to ascend out of the village of Beddgelert and onto the tough second half of this 26.2 mile brute.

At the same 14-mile checkpoint Bracegirdle was still running strong in the women’s race, however having had some recent issues with iron deficiency Anna was unsure if she would feel the effects of this and later stated that she wasn’t sure at this point if she would be able to finish. That said her lead over Andrea was still over a minute as they too headed into the unforgiving second half of the race.

Behind these two a tremendous battle was developing for the final podium spot and Danielle Higham and Beth Taylor were also within a minute of each other.

From this point onwards it was to become clear that Callum Rowlinson’s recent chest cold was not to be a factor. By mile 20 and on to 23 miles the former Bangor University student was beginning to build a sizable lead, and may well have had Gilbert’s 2015 course record in the back of his mind.

Roberts had now been caught and passed by Green and Connolly, but was determined to hang on to complete the race.

If the men’s race winner was looking clear cut the women’s race was anything but, as by mile-23 Rowlands had caught long-time leader Bracegirdle. However, with a lead of less than a minute heading into the last three miles the race was far from over.

In both events the last miles of this race are a huge undertaking as they head to the highest point of the race at mile 24, almost 380 metres above sea level and an ascent of over 200 metres in just 1 mile!

Whilst the women battled it out, Rowlinson was cruising to a maiden Snowdonia victory. Descending back into Llanberis after conquering the Bwlch y Groes climb, Callum had a number of falls on the wet, muddy and rocky downhill section incurring a nasty cut to his elbow in the process. However this was not to deter him as he entered the Llanberis high street and the finish to take a fantastic win in 2:34:14, just 36 seconds outside of the course record and for the second fastest-ever time on this course.

Speaking to the crowd as he crossed the line a tired, blood and mud spattered Rowlinson said:

“I can’t believe it. This means so much, and I am not sure how I made it down in the last couple of miles as I am a terrible downhill runner! But to win this race, when you look at some of the past winners, is just amazing.”

Behind fell and mountain specialist Dan Connolly plummeted into Llanberis, to take second place in a superb 2:38:26. Martin Green held his nerve and form over the last 2 miles to take an excellent third place in 2:41:18, over two minutes faster than his time from 2018.

The last 3 miles unfortunately saw Welsh international mountain runner Roberts really struggle, especially on the climb to mile 24, but he used his strength on the mountains to good effect to finish a highly satisfactory fourth in 2:45:59. Whilst Rowlinson and the lead men took the plaudits of the huge and appreciative Llanberis crowd, the lead women were now entering the last couple of miles and with just a minute between them at mile 23, Rowlands and Bracegirdle were in a mammoth battle.

However, the vastly experienced mountain and ultra-runner and former Eryri winner Rowlands didnt look back, as she began her descent of Bwlch y Groes and held her form on the slippery descent as she entered the village of Llanberis.

Heading towards the finish line a clearly delighted Andrea was full of running, breaking the tape in 3:09:18. The time was immaterial as the accolade of being crowned a now two-time Snowdonia Marathon Eryri winner after her victory in 2014 puts her in the greats of this historic race. Speaking after the race Andrea commented:

“I am really happy to have won this race again. It’s also a demonstration to others that age isn’t a barrier to success. I am 46 now and I feel as strong as ever to be honest!”

Bracegirdle was by now also enjoying the final sprint into the finish as she took a highly-popular second place in 3:09:54, just 30 over seconds behind Rowlands. She was embraced by her family as she crossed the line and was clearly still extremely happy with the runner-up spot.

Danielle Higham demonstrated great strength as she took third, her first time on the Snowdonia podium with 3:13:23. Beth Taylor finished in 4th place, just 41 seconds back.

Race organiser Jayne Lloyd was rightly pleased with what had once again been a great race:

“This marathon never fails to inspire me. It’s my 16th time organising it and each year it still fills me with pride to see the thousands of runners filling the roads of Snowdonia. We saw two great winners in Callum and Andrea today, truly brilliant runs. But this day is not just about great winners, it’s about great people, coming together for so many reasons.”