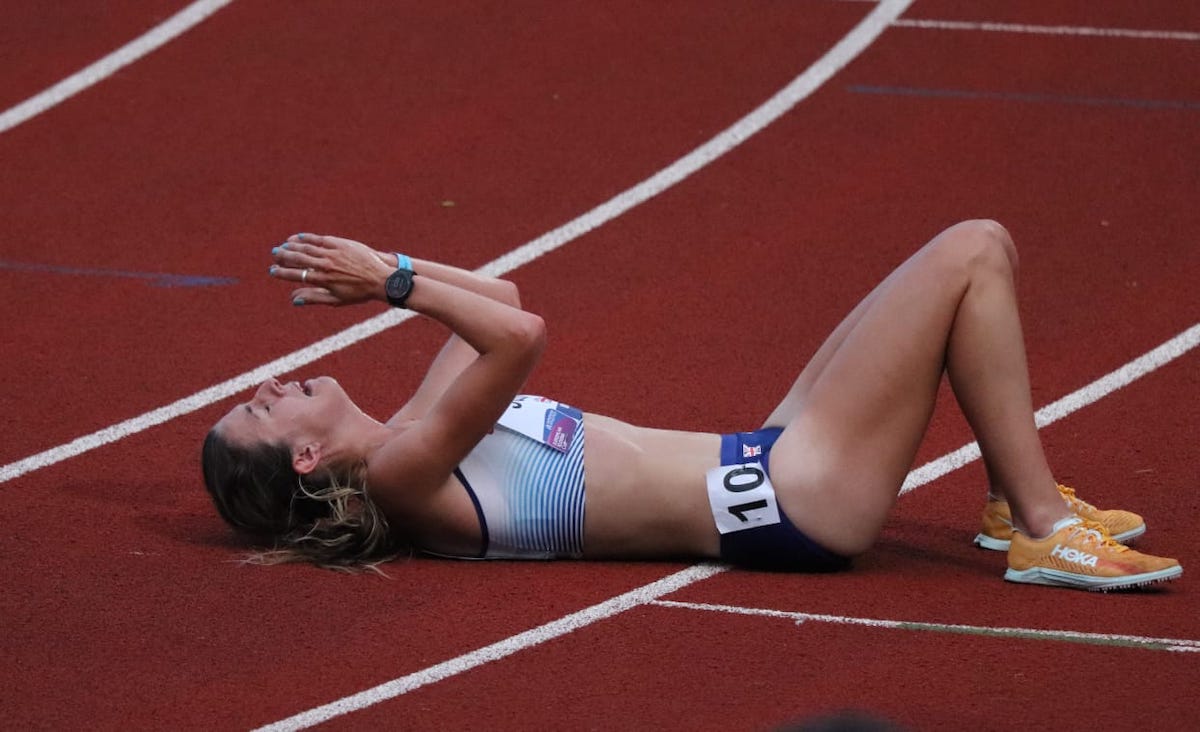 I normally try and start these round ups with a bit of an introduction. Today I will keep it short. There are some weeks where it is simply a pleasure to write about this sport. This is one of them.

I may be a writer-plus-photographer, but more than anything I am simply an athletics fan. Yesterday’s Müller British Athletics 10,000m Championships & European 10,000m Cup in Birmingham was an evening where I was proud to be a fan of this sport. The hardest part is the need for brevity, because I could write an essay about what happened last night. A separate article looking in detail at the races, including interviews with the leading British athletes post-race, will follow on Monday.

In short, Eilish McColgan and Marc Scott took the titles of British 10,000m Champions and in doing so booked their spot at the Tokyo Olympics, as did Jess Judd. There was additional success in the European Cup with the British women taking gold and the men silver in the team competition.

As I said in my preview, there was plenty to be excited about in the women’s ‘A’ race. Israel’s Selamawit Teferi took the lead from the outset and built a healthy gap, going through halfway four seconds ahead of a quartet of Brits (Eilish, Jess, Verity Ockenden and Amy-Eloise Markovc). As the laps progressed, Amy-Eloise and Verity dropped off the pace, and the Israeli had built a 15-second lead by the 9km point.

The Olympic qualifying time (31:25) was looking more and more impossible, with a 2:19 last 800m needed. However, Eilish and Jess rallied to run a staggering last couple of laps – covering the final kilometre in 2:51, and last 200m in under 31 seconds. Eilish told the British Athletics media team abut the advice given to her by Liz;

“She  said don’t leave it to the last lap because you don’t want to miss out and it turns into a 400m race rather than a 10,000m,” she said. “I did have that in the back of my mind so I just kept reminding myself to keep calm over the last couple of laps because training is going better than ever and then there’s a lot of pressure coming into this because when you are training so well. You have one opportunity to try and knit it together on the day so I suppose there was a part of me that was like ‘don’t mess this up’. I’m absolutely buzzing.”

There were a host of other good performances behind, including PBs for Verity Ockenden (31:43.57) and Fast Running’s Hannah Irwin (33:11.08), whilst in finishing seventh Charlotte Arter ran 32:17.40, inside the Welsh qualifying standard for the Commonwealth Games. Debutant Samantha Harrison finished in 32:38.99.

The men’s race had been billed as a battle between Mo Farah, in his first race over 25 laps since the 2017 World Championships, and Marc Scott. It did not disappoint.

The race went out at a rapid pace (62 second first lap!) but soon slowed to a more sensible pace, however after the first few laps it was looking clear that the four-time Olympic Champion would struggle to run the 27:28 Olympic standard (conversely Marc, already holding the Olympic QT), just had to finish in the top-two amongst the Brits and so had no need to push the pace). France’s Morhad Amdouni took the win (27:23.29) ahead of Bashir Abdi of Belgium (27:24.41) and Spaniard Carlos Mayo (27:25.00), all setting new PBs and inside the Olympic QT. Unfortunately it was not to be for Jake Smith, who pulled out mid-race after going with the leaders in the early laps.

Much like buses, you wait for ages for racing to return and it all happens at once! There has been a swathe of competitions taking place on the track across Europe.

Tuesday’s Le Meeting de Montreuil on the outskirts of Paris provided Ellie Baker with a bittersweet race as, in her third 800m in five days and three countries, she joined the sub-two minute club with a 1:59.54 PB finishing second. Agonisingly, however, it was just 0.04 seconds off the Olympic qualifying time. I have no doubt it will happen before long. Piers Copeland ran 3:39.76 over 1500m.

It was great to see Aimee Pratt go under the Olympic standard for the 3000m steeplechase at the Meeting Iberoamericano in Heluva (Spain) on Thursday, where she improved her PB to 9.25.89 in her fourth steeplechase of the season. That time puts her second on the UK all-time list. At the same meeting, Jamie Webb ran 1:46.58, improving by over two second on his time at last week’s Doha Diamond League.

The FBK Games in Hengelo includes some mouth-watering races, including a battle of the Brits over 800m (Max Burgin, Dan Rowden, Elliot Giles, Guy Learmonth and Kyle Langford; Laura Muir, Jemma Reekie, Adelle Tracey and Ellie Baker), whilst Jake Wightman, Charlie Grice and Piers Copeland go over 1500m. Just swhilst it has only just started as I write this Hassan has already broken the 10000m world record!

The Dutch athlete clocked 29:06.82 and shaved almost nine seconds from Almaz Ayana’s old record – regarded as one of toughest in the record books – with a brilliant demonstration of distance running.
Making use of Wavelight technology the crowd at the stadium could perfectly follow Sifan on world record pace.

Hassan, said: “Wow to run this world record here today in Hengelo is something I could only dream of. It’s the perfect confirmation of the hard work we’ve put in getting ready for Tokyo. I am so happy to share this record in front of my Dutch fans. I am so happy!” This was the fourth world record of Hassan’s career. The reigning World Champion over 1500m and 10,000m has also posted world records over one mile, one-hour and 5km on the road. UK Track, and Giles is Back!

Plenty has also been happening on the domestic track scene in recent days, with Wednesday’s Hercules Wimbledon Middle Distance Night perhaps the highlight with an evening of high-quality racing over 1500m and 3000m.

The evening ended with a men’s elite 1500m led by Elliot Giles in his first race since running the second fastest indoor 800m in history (and a British Record) in February. The race, organised by Tonbridge’s Mark Hookway, went out in 2:01 pace to 800m in a tight pack, with Giles showing his dominance over the last 500m to cross the line in 3:40.36, an outdoor PB. It was a close battle for second, with Croydon Harriers’ Dom Nolan just getting the better of Sean Molloy (3:44.72 to 3:44.90). Both were rewarded with PBs, Dom’s time being the second fastest 1500m by a Croydon Harrier.

As well as writing about and photographing the races, I joined the club of Croydon-based athletes coming away with a 1500m PB (4:26.34). This weekend also sees the commencement of the National Athletics League and Youth Development League across the country, although results were not available to bring you at the time of writing!

Davis dominates in the hills

2:33 marathoner Elsey Davis has been hitting the fells and trails recently and was rewarded with a fine win and 2nd overall at the Ullswater Way 20 (actually a bit longer by the sounds of it!) finishing in 2:54:51. Jack Scott was the winning man in a time of 2:49:42.

Also taking place in the Lake District this weekend was the Lakeland Trails Marathon which saw wins for Eden Runners’ Jonathan Cox in 3:07:18 and Chanetelle Brandwood in 3:40:16.

The Spring Blickling Half Marathon, also on Monday, provided wins or Simon Partridge (77:13) and The Ullswater Way 20 in the Lake District on Saturday provided Fast 10’s Elsey Davis with a good run to finish as the fastest female and second overall, in a time of 2:54:51. It was Jack Scott who recorded the overall fastest time with 2:49:42.
Colleen Nicole Mukuya (86:52, a new PB). The Middlesbrough Endeavour Graded 10k saw an impressive run by Mary Ngugi, training partner of Laura Weightman, as she finished in 30:50, a new PB and over a minute ahead of the first male finisher Simon Harrington (32:10).

RunThrough continues to provide a flurry of events across the country. Wednesday’s Chase the Sun 10k at Tatton Park saw wins for Sarah Thomas (41:51) and Ben Multer-Madden (34:56), whilst Andrius Jaksevicius (31:16) and Jenya Zaytseva (31:03) recorded the fastest times at Saturday’s Battersea Park 10k, although the results suggest there were three finishers in under three minutes! The 5k was won by Andy Ray Penny (15:31) and Sophie Harris (17:02).

The Hertfordshire Half Marathon provided podium-topping results for Jo Hurley (91:30) and Robert Barnes (75:52), with Jonney Yeates (34:35) and Rebecca Oôçökill (38:20) taking the honours in the 10k. Finally, the Northampton 10k on Sunday was won by Daniel Connelly (31:01) and triathlete Georgina Schwiening (33:51), a new PB following victories over five miles and the marathon last month.