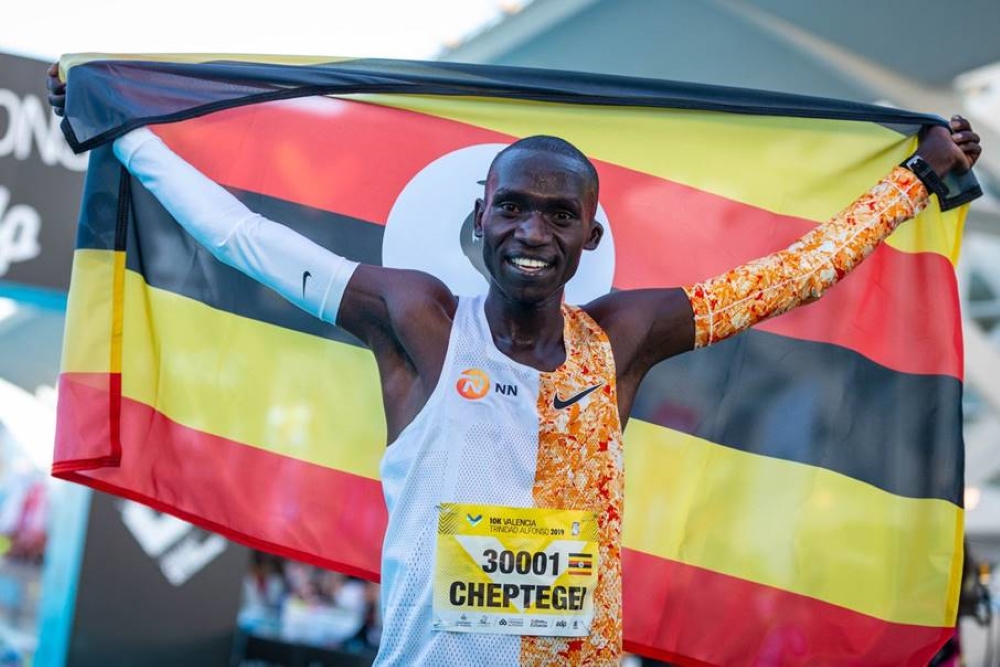 There were some fantastic performances in Valencia this weekend, as well as fast times on home roads and overseas ultra-marathons too. Hannah Irwin reports.

This weekend was quite possibly one of the biggest weekends in the marathon calendar. Many athletes fled to Valencia in search of quick times, and in some cases, Olympic qualifying times, at one of the quickest marathons in the world and an IAAF Gold Label event, The Valencia Marathon.

The women’s race was stacked with competition as the GB women came out in full force. It was Clapham Chaser’s Steph Davis that had the race of her life, finishing a fantastic 13th in the women’s elite field in 2:27:40. Davis smashed the Olympic qualifying time by nearly 2 minutes, putting herself in contention for those three marathon spots at Tokyo.

“’The focus was to have a fun run in the sun.” said the marathoner, “I felt in good shape and hoped to PB but did not expect to run that time at all! It’s still sinking in!’. Hopefully you’re still smiling for a long while with that one Steph. Second brit across the line in 19th place, after pulling out in Frankfurt, was Hayley Carruthers. Carruthers secured herself a marathon personal best of 2:32:42, improving on her time from the London Marathon back in April. Shortly behind Carruthers in 21st position with a cracking time of 2:33:24 was Preston’s Eleanor Davis. After a strong year with personal bests over road 3k, 10k, and half marathon, Davis now adds a marathon best for the year.

Fourth Brit with yet another strong performance in Valencia was Elinor Kirk. Kirk secured herself a finishing time of 2:34:36, a PB by just under 2-minutes! With yet another impressive performance over the marathon distance was Georgina Schwiening (Cambridge Runners) with a time of 2:35:22, another PB of the day by over 2 minutes.

Shortly behind Schwiening in 29th place was Emma Mitchell with a strong 2:36:47. The Northern Irish athlete made her debut performance in the event and proved her strength after an impressive run at the Valencia Half in October. Unfortunately, after a tough year battling against injury, Lily Partridge pulled out at around the 25km mark after having gone through half way in 74:09.

Fast running’s own marathoner, Gill Bland also headed to Valencia to complete the 26.2-mile distance. After a tough race, Bland had a strong finish and crossed the line in 2:55:31.

The men’s race did not disappoint either with some speedy marathon times secured. There was an outstanding run from Paul Pollock with an impressive Olympic qualifying time of 2:10:25. This will not be Pollock’s first Olympics after he finished 32nd in Rio.

Liverpool athlete, Charlie Hulson had a strong debut performance crossing the line in 40th position with a time of 2:14:23. Just 16 seconds behind Hulson was Andrew Davies with a lifetime best and UK40 record of 2:14:46, a 25 second best time. Barlow finishes 3rd in the 10km

The men’s world record fell in the Valencia 10km with Joshua Cheptegei running a stunning 26:38. Josh Grace (AFD) had a PB run, securing himself an 8th place finish in a rapid time of 28:59! Tom Craggs coached athlete, Tracy Barlow had a powerful race, securing herself a 3rd place finish over the 10k-distance with a time of 33:44. Some confusion with chips means we don’t have the full rankings just yet.

Fast 10k running at home too

At another 10k event, the Wesham 10k, athletes took to the roads in the North West over a slightly undulating course, running around the lanes of Salwick and Lea Town.

The winner of the entire event was Chris Livesey of Salford Harriers in 31:54, just eight seconds outside of his seasons best. Next was Wesham Road Runner, Robert Danson, in 32:03, followed by Matthew Laior (Ribble Valley Harriers) in 32:44. For the women it was Toni McIntosh (Ayr Seaforth) who ran a strong race to finish first, clocking 37:13. Second place went to Catherine Carrdus (Lytham St Annes) in 40:46 followed by Sue Coulthurst. At another of the Sri Chimnoy London Marathon Events race was the Grizzly Bear 10k. These races provide yet another opportunity for athletes in search of pure racing without all the added extras. Podium finishers are presented with a piece of fruit and cereal bar, proving it is all about the element of racing in a fast environment.

All of the top three women came across the road in under 39 minutes. The winning fruit went to Rebecca Piggott of London Heathside who ran a solid 36:19, a 25-second personal best. Second female home in a time of 38:08 was Matilde Lomba and in third was Evangelista Divetain (London Heathside) in 38:20.

In the men’s race it was Alix Ramsie who landed himself the top place on the podium. Ramsie of South London Harriers crossed the line in 32:28 in what was a close race. Only 4 seconds later, Tom Goulding of Birtley AC finished the race. It was Serpentine Andrea Fraquelli who rounded off the men’s podium with a finishing time of 32:36. Impressive running!

Over the much larger 100km distance, the 100km Ultra Trail Cape Town race occurred. Salomon runner Beth Pascall secured herself an impressive win with an even more impressive top 10 overall finish. A sub 11 hour finish, less than an hour behind US men’s winner Cody Reed, meant a course record for the medic, who caps off an excellent 2019 that included top five positions at Western States and the UTMB.

Over the impressive 300km distance, the Algarviana Ultra Trail race took place in Portugal. Paul Giblin was the well-deserved winner and beat the previous record by around three hours with a time of 38 hours and 6 minutes. The modest athlete was taken outside of his mountainous comfort zone and tested with some flatter patches of running but did not disappoint. Despite stomach problems early on he kept relaxed and had an incredible race.

It was Scotland-based athlete, Patricia De Carvalho, who was the winner of the women’s race in her 3rd time doing the event. Carvalho finished in a time of 64 hours 47 minutes.

Over the shorter, but speedier 5k distance was the Podium 5k road race. The podium race’s offer the perfect, true racing experience without the added frills, but with a tried and tested fast course. The podium 5k race series is the perfect opportunity for athletes to test their fitness and chase after PB times.

This weekend’s runners were faced with chilly, yet speedy conditions. It was Andy Smith who was first male across the line in a rapid 14:52 for Pudsey & Bramley AC. In a close finish it was Matthew Crehan (St Helens & Sutton) who landed the silver medal in 14:54. Preston Harriers’ Kian Davis took the bronze medal position in 15:08.

Ciara Mageean (Team NB Mcr), European Bronze medalist in 2016 and 2019, did the women proud with a speedy, sub-16, 15:48 finishing time. The second female finisher with a time of 16:52 from Manchester Harriers was Rachael Franklin. Completing the top three women was Leeds City’s Alice Leake in 17:25. Also over the 5km distance was the Croft Circuit 5km. It was North Belfast Harrier’s Andrew Milligan who was the first male to cross the line in 15:06. The U23 athlete ran himself to an impressive 21 second personal best. Closely behind Milligan in 15:20 was Joe Armstrong of Morpeth Harriers & AC, another U23 athlete. Completing the top 3 male finishing positions was David Green in an extremely close 15:23. The race boasted a total of 6 men running under 16-minutes.

Following on from an impressive win for England at the Rennes 10k last month, Danielle Hodgkinson of Wallsend ran a cracking 16.30 for a first-place finish for the women and an incredible 11th overall. Second woman across the finish line was Gateshead Harriers & AC’s Gillian Manford in 18:08 followed by Georgia Campbell in 18:09. A very close race!

In its 73rd year was the Victory 5-mile race. Matt Bergin landed himself the win in a time of 23:40, a close 5-seconds outside of his personal best. In second place was U20 athlete, Henry McLuckie with a time of 24:18 for his first ever 5-mile race. Third place was secured by Joe Wade in 24:31.

The winner for the women was Tonbridge AC’s Lucy Reid. Reid matched her personal best of 27:05 exactly. Following shortly was Maisie Trafford of Arena 80 in 27:35. The final woman on the podium was AFD’s Emily Wicks in 28:02 who came 65th in the World Cross Country Championships back in 2013.

Over the 5-mile distance again, but this time through the mud, was the Midlands 5-mile cross country championships. It was Gemma Steel who took home gold for the women. We’ll include more results if we can find them.

Also over the marathon distance this weekend, was the Nottingham Christmas Marathon. The overall win went to Loughborough Student, James Ford, in a finishing time of 2:42:37. The second finisher was Ben Harris of Retford AC in 2:44:16.

An impressive third overall and first woman was Johanna O’Regan of St Neots Riverside Runners in 2:45:24, just 3-minutes outside of her lifetime best set earlier this year in Manchester. It was fellow clubmate Caroline Brooks who secured herself the silver woman’s medal in 2:49:32, in a solid 5th place overall.

As part of the same event was the shorter distance 10k race. Euan Wilson ran an impressive race, finishing in a time of 33:07 for first place. 1st female finisher, in third place overall was Johanna Gurney. Gurney stopped the clock on 34:24.

The RunThrough Lee Valley Velo Park Race saw athletes race over various distances including that of 10-miles. Victory for the men went to Stephen Fabes in 57:44 and it was Sally Svenlen who ran herself to the top of the women’s podium in 1:12:09. In the half marathon event, Ben Toye secured himself the gold medal in 1:15:41 whereas Katie Brown obtained the woman’s first-place finishing position in 1:23:52.

There were some extremely noteworthy performances in the mud as well as on the road. In the Alton Sports Hampshire Cross Country League, Aldershot & Farnham District AC dominated the men’s race, however it was Reading AC that secured the women’s team gold. Jess Gibbon ran a storming race to secure herself the position at the top of the podium with a 32-second lead followed by AFD’s own Steph Twell. Third through the mud was Annabel Gummow of Winchester. The men’s results are yet to be uploaded.